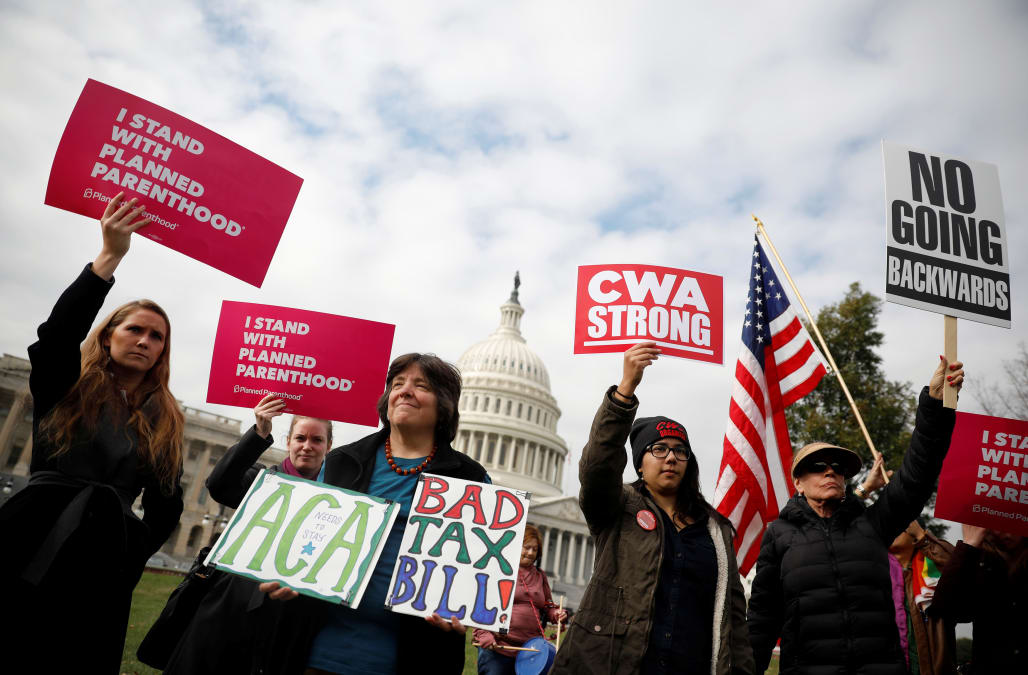 After the Senate passed the polarizing GOP tax bill in a 51 to 48 vote in Washington early Wednesday morning, Democratic lawmakers lambasted their Republican colleagues, nearly all of whom voted for the bill.

"When the story of this tax plan is written, congressional Republicans will be remembered for never wavering in their determination to give a massive tax cut to corporations," Sen. Cory Booker said in a statement. "It's foolhardy at best and deceitful at worst."

"This bill will exacerbate inequality, not ameliorate it," Booker continued. "It's irresponsible, reckless, unjust, and just plain cruel – and for these reasons and more, today is one of my most disappointing days as a U.S. Senator."

"We are witnessing highway robbery in broad daylight and a looting of the Federal Treasury," Sen. Bernie Sanders of Vermont said in a passionate speech Wednesday.

Split on party lines, the Tax Cuts and Jobs Act (TCJA) managed to recruit all Republican senators except for Sen. John McCain of Arizona, who is at home resting after receiving treatment for brain cancer last week. The bill is scheduled to go back to the House for a technical vote before it lands on President Donald Trump's desk for his signature.

"It was a farce," Sen. Tom Carper of Delaware said in a statement. "From the start, Republicans' race to get partisan tax reform across the finish line has made a mockery of our legislative process."

"My Republican colleagues are desperate for a win, and clearly willing to call anything a win," Carper continued.

Sen. Mark Warner of Virginia issued a terse statement: "This is the worst piece of legislation we have passed since I arrived in the Senate."

Sen. Elizabeth Warren of Massachusetts said on Twitter: "The bill that the Republicans jammed through the Senate tonight isn’t tax reform. It’s a heist. Let's call this out for what it is: Government for sale."

"Sooner or later, a reckoning is coming," Warren warned. "And I will promise you this: When it does, the politicians who lead this Congress & voted for this tax heist will be held accountable for turning their backs on the American people."

The bill, which is expected to make sweeping changes to the current tax code for businesses and individual taxpayers, managed to pass the House by a comfortable margin with its 227-203 vote Tuesday afternoon.

The bill is generally expected to give a modest boost to the US economy, but by less of a margin than what Republican lawmakers have promised. However, independent analyses show that the bill's final version will add $448 billion to over $1 trillion to the federal deficit over a decade, which contradicts the GOP's message that the legislation will pay for itself.

NOW WATCH: How the net neutrality repeal will hurt small businesses — including anyone who sells things on sites like Etsy

More from Aol.com:
Two Republican senators say they will vote for the GOP tax bill, all but sealing its passage
Marco Rubio threatens to vote against the GOP tax bill unless leaders meet demands
Republicans release their final tax bill — here's what's in it