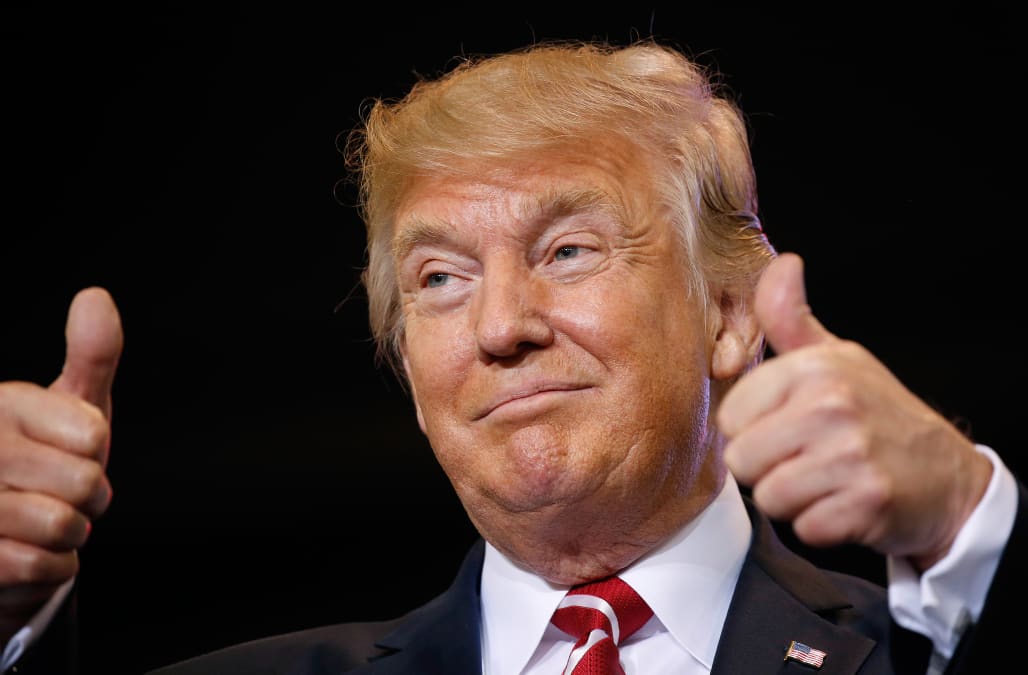 Though it took nearly 11 months for President Donald Trump and the Republican party to lock in a major legislative victory with the passage of the GOP tax bill, Trump often appeased his base during his first year in office by using his executive power to fulfill campaign promises.

Sometimes, these choices were as simple as backing out on action taken by his predecessor Barack Obama. Trump announced his intention to withdraw from both the Paris climate agreement and the Trans-Pacific Partnership, nullifying two of the most recent global policies supported by Obama regarding the environment and trade, respectively.

In other cases, Trump aimed to change decades of U.S. policy -- domestically by rewriting the tax code and internationally by taking a more bluntly pro-Israel stance in the Middle East.

But by and large, Trump has shown in 2017 that he’s willing to keep the people who put him in office happy at whatever cost. Click through the gallery below to see the promises he kept this year.

Campaign promises that Trump kept in 2017

After congressional Republicans refused to hold a hearing for Obama nominee Merrick Garland to replace the late Antonin Scalia, who passed away in February 2016, Trump nominated Neil Gorsuch to the empty Supreme Court seat soon after taking office in January. At the time, he said, “I made a promise to the American people, if I were elected president I would find the very best judge in the country for the Supreme Court.”

Trump announced in December that he planned to recognize Israel’s claim to a city at the heart of the Israel-Palestine conflict by moving the American embassy from Tel Aviv to Jerusalem.

That would fulfill a 2016 campaign pledge, although he has offered no timeline for the embassy relocation and recently signed a waiver officially delaying any move for six months.

One of the first major uproars from the left during Trump’s presidency came after he signed an executive order suspending immigration from several Muslim-majority countries during his first week in office.

After a series of drawn-out court battles, the Supreme Court allowed the third version of the travel ban to go into full effect on December 4. The action meant people cannot enter the U.S. from Iran, Libya, Syria, Yemen, Somalia and Chad – fulfilling a promise from a campaign speech that singled out Libya and Syria as two places from which he would suspend immigration.

The former businessman came into the Oval Office eager to craft an image of someone yearning to prevent politicians from being bound to business interests. So in his quest to “drain the swamp,” Trump enacted an executive order in January meant to limit the sort of lucrative, ethically questionable jobs that former presidential aides have occasionally attained soon after leaving the White House.

Trump formally withdrew from the TPP directly after inauguration weekend on the first Monday of his term. It was no surprise he was in such a hurry to pull the United States out of the pact after railing on the Obama-negotiated agreement throughout his campaign, alleging the trade deal took jobs away from Americans.

Make a rule that for every federal regulation enacted, two must be removed

President Trump issued an executive order on January 30 that sought to dramatically reduce federal regulations across the board. The order requires all agencies to cut two existing regulations for every new one introduced, a campaign promise that hailed to his capitalist businessman roots.

Within a week of taking office, the president signed two executive orders to move forward with the construction of the Keystone XL and Dakota Access pipelines, rolling back the Obama administration’s environmental policies in order to increase domestic energy production and bolster the industry’s infrastructure. Obama had famously rejected the $6.1 billion Keystone XL project in 2015.

In a sort of parallel opposition to president Barack Obama, who repeatedly claimed that he’d close Guantanamo Bay but ultimately never followed though, President Trump promised to keep the maximum-security prison in Cuba open and “load it up with bad dudes.” As of January 2017, 41 detainees remained there, and Trump has made no indication he’ll shut down Gitmo.

Trump initiated a 90-day federal hiring freeze almost immediately after entering the Oval Office, putting a halt to the rush of hires by the Obama administration before Inauguration Day in an attempt to fill the ranks with Democrats. Trump framed it as a measure that would “clean up the corruption and special interest collusion in Washington, D.C.”

As a skeptic of human-induced climate change, Trump targeted the EPA as an agency that could drastically reduce costs. Trump appointed Scott Pruitt to lead the agency the former Oklahoma attorney general had criticized for years over its alleged strict regulations.

Though Congress seems unlikely to pass the 31 percent budget reduction proposed by Trump and Pruitt, the president certainly can’t be accused of not trying to significantly downsize it.

Pull out of Paris climate accord

Trump declared in June that he would withdraw the U.S. from the historic Paris agreement that was supported by Barack Obama in an effort to halt climate change. He decried “draconian” financial and economic burdens it puts on American workers. However, he added that he was open to re-entering the accord “on terms that are fair to the United States.”

Though Trump couldn’t manage to convince Congress to lower the corporate tax rate to 15 percent as he’d proposed, the 21 percent rate presented in the tax bill passed by Congress right before the holidays still represents a significant decrease from the previous 35 percent rate.

Less than an hour after the Senate passed the massive GOP tax reform bill in the wee hours of December 20, Trump celebrated the demise of the individual mandate, which was attached to the legislation, on Twitter. The president had been ripping Obamacare for years, in particular, the requirement that punished Americans if they decided to go without health insurance.

However, the mandate won’t be abolished until 2019 since the legislation was passed too late in time for 2018.