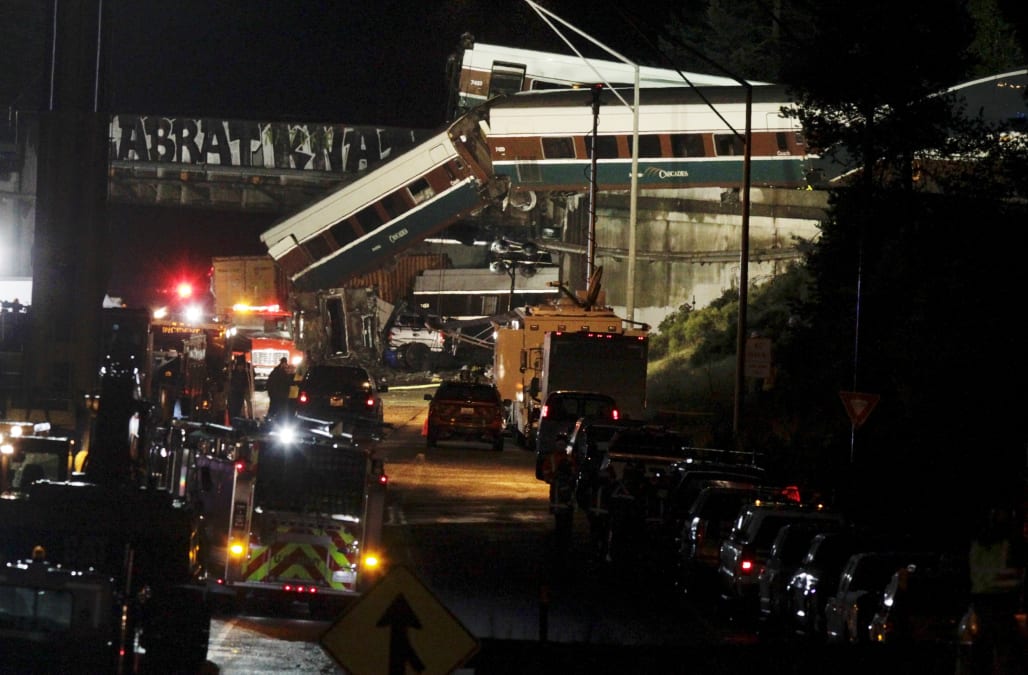 A local reporter for local NBC affiliate KING 5 News captured video footage aboard the Amtrak train that derailed in DuPont, Washington, on Monday.

"I shot this video on board the #Amtrak501 in the 6 o clock hour this morning," Alex Rozier said on Twitter. "We got off after shooting the video. This specific car on the train derailed minutes after we shot this video."

"In the 7 o clock hour that same train derailed, Rozier continued. "We got off 10 minutes before the crash."

In the video, Rozier is seen on the train that eventually derailed at around 7:40 a.m., killing at least three people and sending at least 100 people to the hospital, according to the Associated Press.

In another video, Rozier pans a camera to Jim, a photographer, and asks, "What do you think?"

Everyone on @Amtrak 501 received this inaugural lanyard. At first, @AlexRozierK5 and I got a chuckle about it. I'll tell ya right now that we're holding onto these with our lives. #AmtrakDerailmentpic.twitter.com/Nl8L0s9E4i

"TV news crews often get pulled from one story to go to the next breaker. This time it may have saved @AlexRozierK5 and @King5unit9's lives," tweeted KING 5 News reporter Elisa Hahn.


NEW: I shot this video on board the #Amtrak501 in the 6 o clock hour this morning. We got off after shooting the video. This specific car on the train derailed minutes after we shot this video. pic.twitter.com/3g25PvMAMe

The train was making its first trip on a new route from Seattle in 6:00 a.m. to Portland about 3 1/2 hours later, the Associated Press said. It was the first time the public used a new bypass built on an existing rail line along the highway from Tacoma, Washington to DuPont, near where the train derailed.

Seventy-seven passengers and seven crew members were aboard when it derailed, pulling 13 cars from the tracks. National Transportation Safety Board investigators were looking at the scene to determine the cause.

NOW WATCH: Warren Buffett lives in a modest house that's worth .001% of his total wealth — here's what it looks like

SEE ALSO: Photos show the moment an Amtrak train in Washington derailed and fell onto a highway