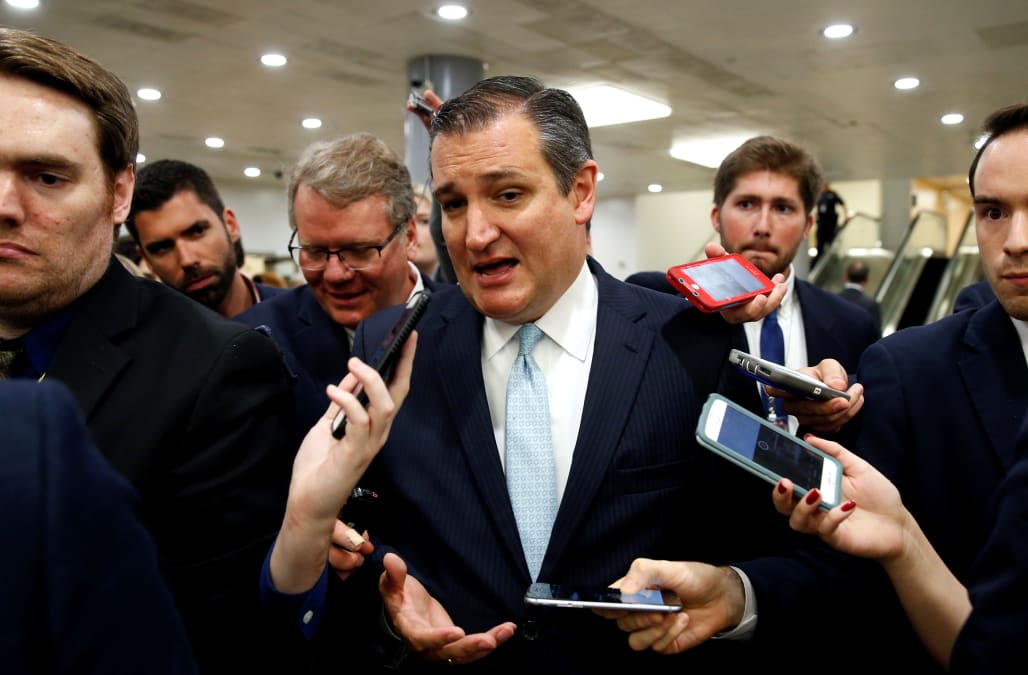 The conversation took a turn for the XXX-wing.

The man often known as Luke Skywalker criticized FCC Chairman Ajit Pai as “profoundly unworthy” of using a lightsaber, which prompted Cruz to chime in Sunday and claim that government regulation of internet service providers would be the “dark side.”

Hamill told the senator that he had mistakenly replied to someone named “Hammill” and used the opportunity to bring up another instance of someone playing with his own lightsaber not such as long, long time ago.

9 PHOTOS
Ted Cruz through the years, with family
See Gallery

Ted Cruz through the years, with family
UNITED STATES - MARCH 21: Ted Cruz (R) Texas (Photo By Douglas Graham/Roll Call)
U.S. Senate candidate Ted Cruz arrives for a luncheon near the state Republican convention, Friday, June 8, 2012, in Fort Worth, Texas. (Ron T. Ennis/Fort Worth Star-Telegram/MCT via Getty Images)
U.S. Senate candidate candidate Ted Cruz and his wife, Heidi, wave to delegates after he spoke on the final day of the state Republican convention at the FWCC on Saturday, June 9, 2012, in Fort Worth, Texas. (Ron T. Ennis/Fort Worth Star-Telegram/MCT via Getty Images)
U.S. Senator Ted Cruz, a Republican from Texas, speaks at the Heritage Foundation in Washington, D.C., U.S., on Wednesday, Oct. 30, 2013. Cruz was scheduled to speak on the scope of treaty power in the U.S. Constitution. Photographer: Pete Marovich/Bloomberg via Getty Images
LYNCHBURG, VA - MARCH 23: Senator Ted Cruz (R-Texas) stands on stage his his daughter, Catherine Cruz, 4, left, his wife, Heidi Cruz, and his older sister, Caroline Cruz, 6, right, after he made a speech announcing his candidacy for a presidential bid at Liberty University on Monday March 23, 2015 in Lynchburg, VA.(Photo by Matt McClain/ The Washington Post via Getty Images)
Republican 2016 U.S. presidential candidate and U.S. Senator Ted Cruz sits on the edge of the stage with his young daughter Catherine during a commercial break at the first official Republican presidential candidates debate of the 2016 U.S. presidential campaign in Cleveland, Ohio, August 6, 2015. REUTERS/Brian Snyder
Republican presidential candidate Senator Ted Cruz (R-TX ) and his family acknowledge the crowd at Faith Baptist Bible College in Ankeny, Iowa, January 23, 2016. REUTERS/Aaron P. Bernstein TPX IMAGES OF THE DAY
U.S. Republican presidential candidate Ted Cruz (R-TX) appears with his daughters Caroline and Catherine at a campaign event at Zaharakos Ice Cream Shop in Columbus, Indiana, U.S., April 25, 2016. REUTERS/Aaron P. Bernstein TPX IMAGES OF THE DAY
Senator Ted Cruz, a Republican from Texas and former 2016 presidential candidate, takes the stage with his family during the 2016 Texas Republican Convention in Dallas, Texas, U.S., on Saturday, May 14, 2016. Paul Ryan made clear Thursday that he is sticking with his extraordinary gambit that he isn't ready to support the Republican nominee for president unless Donald Trump can demonstrate that he's Republican enough. Photographer: Laura Buckman/Bloomberg via Getty Images
Up Next

The jab resurfaced the fact that Cruz’s Twitter account “liked” a video called “Moms Bang Teens 20” in September, though he said that a staffer was responsible and had been reprimanded accordingly.

“Respond not with facts, but with anger. Who was it that said, ‘Fear is the path to the dark side…fear leads to anger…anger leads to hate’?” Cruz responded, also apologizing for misspelling Hamill’s name and said that FCC regulation of the internet was “really bad for freedom.”

The repeal of the net neutrality rules instituted in 2015 have led many to believe that internet service providers will begin creating tiers of the internet for different sites depending on how much they can pay.