Tillerson, in new overture to North Korea, says ready to talk without pre-conditions 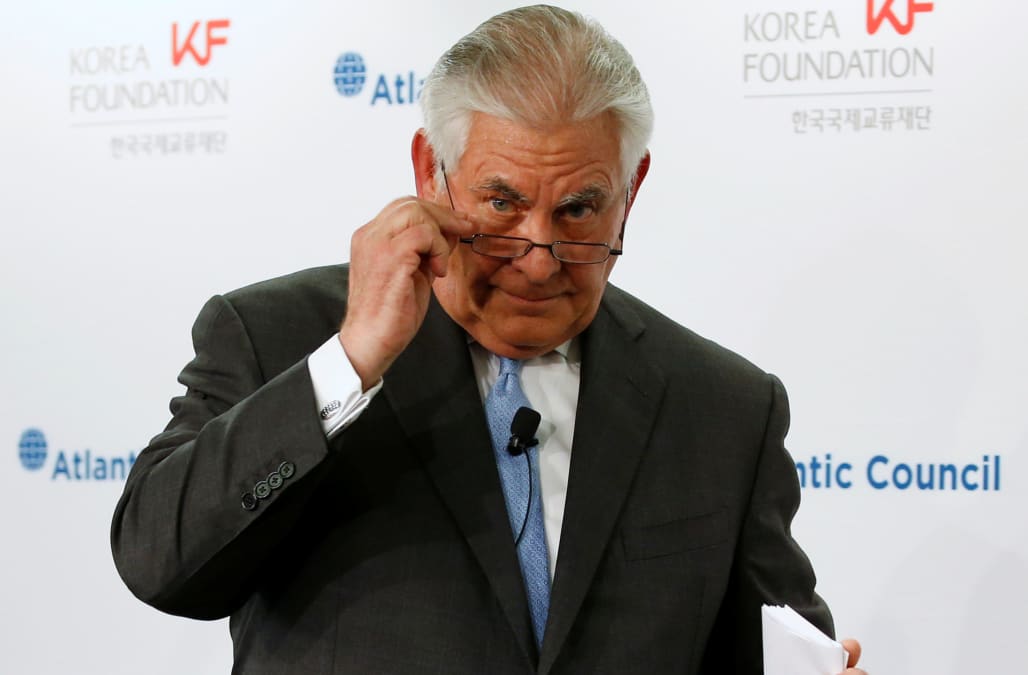 WASHINGTON, Dec 12 (Reuters) - U.S. Secretary of State Rex Tillerson offered on Tuesday to begin direct talks with North Korea without pre-conditions, backing away from U.S. demands that Pyongyang must first accept that any negotiations would have to be about giving up its nuclear arsenal.

Tensions have flared anew since North Korea said it had successfully tested a new intercontinental ballistic missile last month in what it called a "breakthrough" that put the U.S. mainland within range.

While reiterating Washington's long-standing position that it cannot tolerate a nuclear-armed North Korea, Tillerson said the United States was "ready to talk any time they're ready to talk," but that there would first have to be a “period of quiet” without nuclear and missile tests.

Tillerson also disclosed that the United States had been talking to China about how to secure North Korea’s nuclear weapons in the event of a collapse of the government in Pyongyang, and that Beijing had been given assurances that if U.S. forces had to cross into North Korea they would pull back across the border into the South.

But he made clear that the United States wants to resolve the North Korea standoff through peaceful diplomacy and, in terms far more tempered than President Donald Trump’s recent threats against Pyongyang, offered to hold exploratory talks.

"Then we can begin to lay out a map, a road map, of what we might be willing to work towards," Tillerson said, suggesting that any initial contacts would be about setting the ground rules for formal negotiations.

DOES TILLERSON HAVE TRUMP'S BACKING?

It was not immediately clear whether Tillerson, whose influence has appeared to wane within the administration, had Trump's full support to seek such a diplomatic opening.

Tillerson has previously expressed a desire to use diplomatic channels with Pyongyang, but Trump tweeted in October that such engagement would be a waste of time.

North Korea, for its part, has made clear that it has little interest in negotiations with the United States until it has developed the ability to hit the U.S. mainland with a nuclear-tipped missile, something most experts say it has still not achieved.

"We're ready to have the first meeting without pre-conditions," Tillerson said.

"It’s not realistic to say we’re only going to talk if you come to the table ready to give up your program," he said. "They have too much invested in it. The president is very realistic about that as well."

Tillerson’s comments appeared to mark a shift from previous statements by senior U.S. officials that North Korea would have to show it is serious about discussing nuclear disarmament before formal talks could begin.

Tillerson also said that the United States was working to tighten enforcement of international sanctions against North Korea, especially further measures that China can apply, and that Washington had a full menu of military options if such a response is needed.

“It is important that the diplomatic effort be backed up with a very credible military alternative,” he said, adding that Trump “intends to make sure that they do not have a deliverable nuclear weapon to the shores of the United States.”

He called on North Korea to show restraint.

“It’s going to be tough to talk if in the middle of our talks you decided to test another device,” Tillerson said. “So we continue to indicate to them that we need a period of quiet. You need to tell us you want to talk.”

The United Nations political affairs chief told senior North Korean officials during a visit to Pyongyang this week that there was an "urgent need to prevent miscalculations and open channels to reduce the risks of conflict," the world body said.

Jeffrey Feltman, the highest-level U.N. official to visit North Korea since 2011, met with Foreign Minister Ri Yong Ho and Vice Minister Pak Myong Guk, the United Nations said in a statement on Saturday after Feltman arrived back in Beijing. (Reporting by Matt Spetalnick and David Brunnstrom in Washington; Editing by Clive McKeef and James Dalgleish)