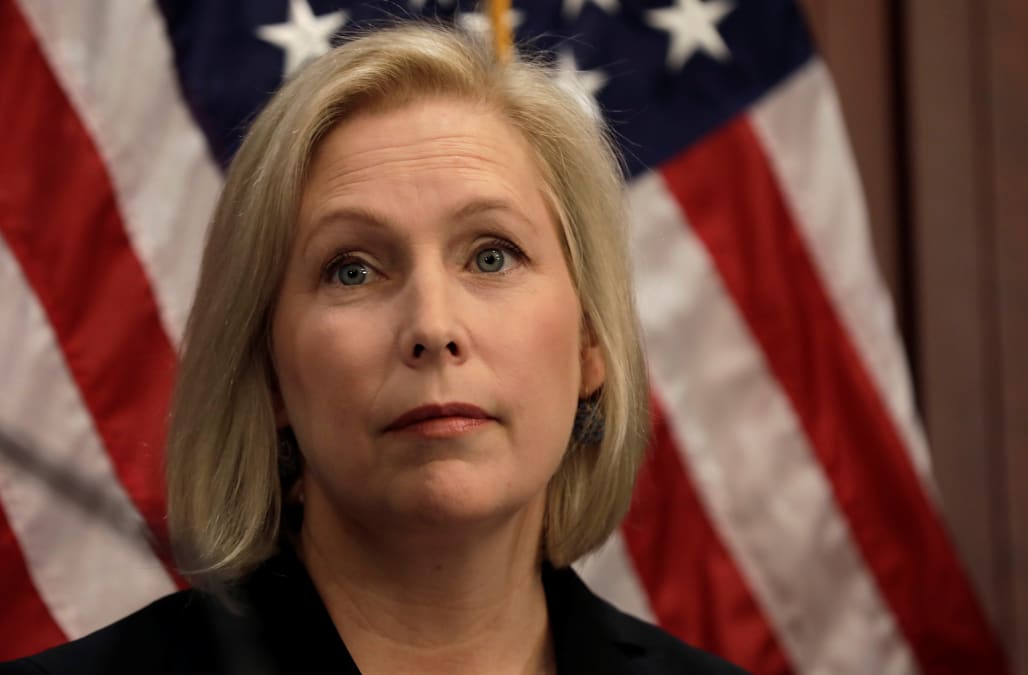 Sen. Kirsten Gillibrand, D-N.Y., called President Donald Trump's Twitter attack on her a "sexist smear" meant to silence her and those who have accused him of sexual misconduct after the two sparred on Twitter on Tuesday.

Trump, in an early morning tweet, called Gillibrand a “lightweight” and a “total flunky” for Senate Minority Leader Chuck Schumer, who also represents New York, a day after she called on the president to resign amid a series of sexual misconduct and assault allegations against him.

He also claimed she would beg for campaign contributions “not so long ago” — before he was a politician — suggesting she “would do anything for them.”

“Lightweight Senator Kirsten Gillibrand, a total flunky for Chuck Schumer and someone who would come to my office “begging” for campaign contributions not so long ago (and would do anything for them), is now in the ring fighting against Trump. Very disloyal to Bill & Crooked-USED!” the president tweeted.

Gillibrand, at a Tuesday news conference, continued to excoriate the president for the suggestive remark and said she will continue to call for him to step down.

"It’s not going to silence me," she said.

"Their voices also will not be silenced," she added, referring to the president's accusers, "and neither will the millions of women and men who have marched against the president and his policies."

Gillibrand said Congress should open an investigation into the president because "it’s the right thing to do."

Trump’s attack was prompted after Gillibrand told CNN in an interview on Monday that the president should step aside amid the dozens of allegations from women, which range from inappropriate touching to sexual assault.

"President Trump has committed assault, according to these women, and those are very credible allegations of misconduct and criminal activity, and he should be fully investigated and he should resign," Gillibrand told CNN.

The president has been accused of sexual harassment or assault by more than a dozen women. He has forcefully denied all allegations.

Gillibrand responded to the barb-laced tweet with one of her own, vowing to continue to talk about the allegations against him and call on Congress to investigate the president.

Lightweight Senator Kirsten Gillibrand, a total flunky for Chuck Schumer and someone who would come to my office “begging” for campaign contributions not so long ago (and would do anything for them), is now in the ring fighting against Trump. Very disloyal to Bill & Crooked-USED!

“You cannot silence me or the millions of women who have gotten off the sidelines to speak out about the unfitness and shame you have brought to the Oval Office,” the senator tweeted.

A number of Gillibrand's Democratic colleagues have since come to her side. Sen. Elizabeth Warren of Massachusetts, who frequently tussles with the president, called the attack an attempt "to bully, intimidate and slut-shame" Gillibrand.

"Are you really trying to bully, intimidate and slut-shame @SenGillibrand? Do you know who you're picking a fight with? Good luck with that, @realDonaldTrump. Nevertheless, #shepersisted," Warren tweeted.

Are you really trying to bully, intimidate and slut-shame @SenGillibrand? Do you know who you're picking a fight with? Good luck with that, @realDonaldTrump. Nevertheless, #shepersisted. https://t.co/mYJtBZfxiu

Sen. Dick Durbin, D-Ill., told reporters on Tuesday, that the president will falter in his attempt to bully Gillibrand.

"I could just tell you that the president will fail in any effort to intimidate Kirsten Gillibrand. It ain’t going to work," he said. "If anything she is going to be strengthened in her efforts. She is a pretty determined person."

After Gillibrand's CNN appearance, Sen. Ron Wyden, D-Ore., also called for Trump to resign and called on Congress to investigate.

These women are right. If @realDonaldTrump won't resign, Congress must investigate allegations by many, many women that he sexually assaulted and harassed them. No one is above the law. https://t.co/ySP9DVUgLP

More from NBC News:
Trump attacks Kirsten Gillibrand on Twitter after she calls on him to resign
Sanders goes off on the media at White House press briefing
World leaders slam Trump’s Jerusalem move as ‘irresponsible’ and ‘dangerous’