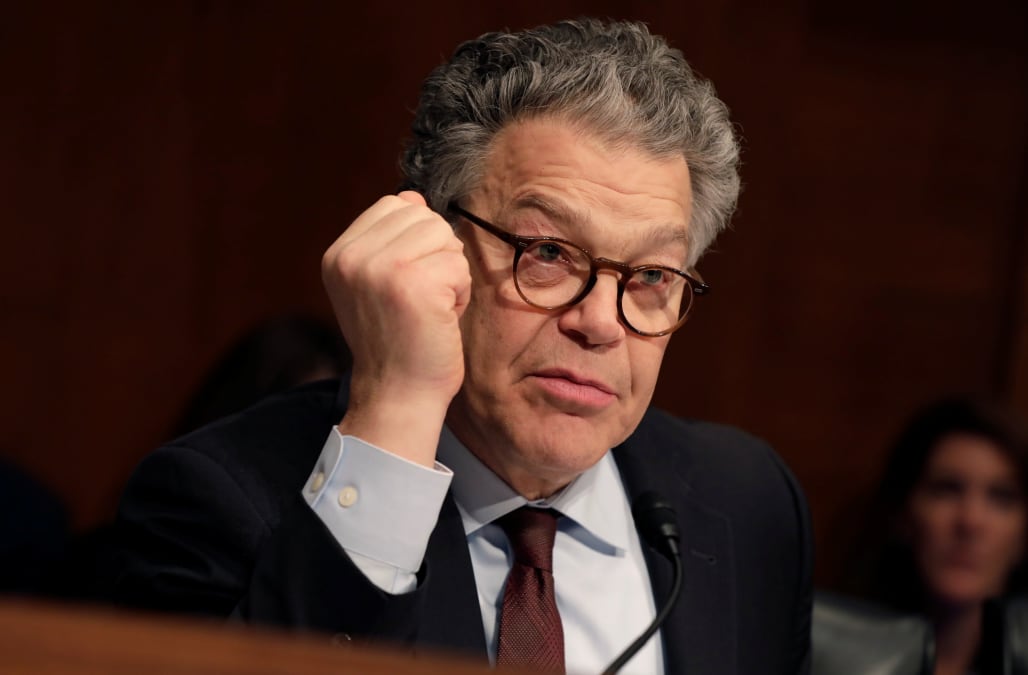 Senator Al Franken announced his resignation Thursday amid allegations that he inappropriately touched several women — a shameful exit for a rising star of the Democratic party.

"I am announcing that in the coming weeks I will be resigning as a member of the United States Senate," Franken said. "Let me be clear, I may be resigning my seat but I am not giving up my voice."

The dramatic announcement from the Senate floor comes one day after more than a dozen Democratic Senators, including Sens. Kirsten Gillibrand and Chuck Schumer of New York, called for Franken to step down following allegations made by eight women.

"Over the last few weeks, a number of women have come forward to talk about how they felt my actions had affected them. I was shocked. I was upset," Franken said. "But in responding to their claims, I also wanted to be respectful of that broader conversation because all women deserve to be heard and their experiences taken seriously."

Franken added that he believes some of the allegations against him "are simply not true."

Minnesota Gov. Mark Dayton is likely to tap Lt. Gov. Tina Smith to replace the two-term lawmaker, according to the Minneapolis Star Tribune.

Though the writing appeared to be on the wall in the days leading up to his announcement, Franken's departure was not certain.

A tweet posted Wednesday evening on Franken's Twitter account said: "Senator Franken is talking with his family at this time and plans to make an announcement in D.C. tomorrow. Any reports of a final decision are inaccurate."

An unnamed woman came forward Wednesday to accuse the Minnesota lawmaker of forcing himself on her.

She claimed Franken insisted he had the right, as an entertainer, to kiss her, according to a Politico report.

Franken, elected to his seat in 2008, denied the allegation.

"This allegation is categorically not true and the idea that I would claim this as my right as an entertainer is preposterous. I look forward to fully cooperating with the ongoing ethics committee investigation," he said in a statement.

Tina Dupuy later wrote in The Atlantic that Franken groped her in 2009, while they posed for a photo at a Media Matters party.

"We posted for the shot. He immediately put his hand on my waist, grabbing a handful of flesh. I froze. Then he squeezed. At least twice," she wrote.

Before entering politics, Franken was famous for his comedy chops.

The former funnyman was a writer and cast member for NBC's "Saturday Night Live" for two stretches over the course of two decades.

Sens. Claire McCaskill, Kamala Harris and Dick Durbin were among the lawmakers who urged Franken to step aside Wednesday - a move that political experts believe was motivated in part by the Senate campaign of Alabama Republican Roy Moore, who also faces sexual misconduct allegations dating back decades.

Multiple women have accused the 70-year-old of sexual misconduct with them when they were teens and he was a deputy district attorney in his 30s.

If Moore is elected, it could create a political nightmare for Republicans, who have promised an ethics probe.

By calling on Franken to step down, Democrats appear to be attempting to paint themselves as the party of moral high ground amid the growing wavesexual harassment and assault allegations against powerful men in politics, media and other industries.

RELATED: Al Franken through the years

"I, of all people, am aware there is some irony in the fact that I am leaving while a man who has bragged on tape about his history of sexual assault sits in the oval office and a man who has repeatedly preyed on young girls campaigns for the senate with the full support of his party," Franken said, taking a swipe at both Moore and President Trump.

Prior to the scandal, the 66-year-old Franken was seen as a potential presidential contender for 2020.

At least eight women have accused Franken of groping or trying to forcibly kiss them.

Radio and sports broadcaster Leeann Tweeden accused Franken of sticking his tongue down her throat and later pretended to grope her in a picture while she was sleeping.