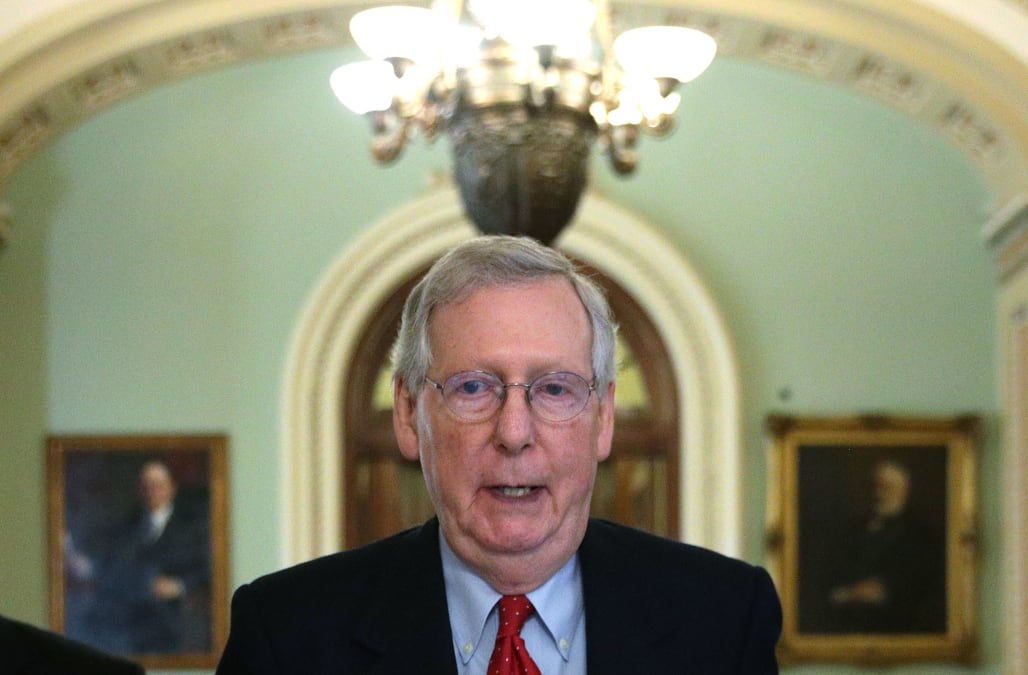 As Republicans hurtle toward making their massive tax bill into law, experts are starting to find a slew of errors they say are likely the result of a rushed process.

Republicans argued that the bill was the culmination of years of work. But the actual bills off that work moved through both chambers of Congress at legislative light speed.

The House passed its version of the Tax Cuts and Jobs Act just two weeks after rolling it out. The Senate got its version through in three weeks — with a week off for Thanksgiving making up one of those.

Given the breakneck speed of passage and last-minute dealmaking that went into passing the bills (the Senate was making handwritten changes to their bill hours before it passed), it's no surprise they have discovered complications in the immediate aftermath.

Perhaps the biggest of the errors came in the Senate bill, which at the last minute kept in the corporate alternative minimum tax (AMT). As was first noted by Richard Rubin at the Wall Street Journal, leaving the corporate AMT could have major consequences for businesses, such as effectively eliminating the benefit of the research and development tax credit.

The change was so sudden that experts say the Joint Committee on Taxation may have understated its potential impact. Lily Batchelder, a tax law professor at New York University and former National Economic Council deputy director, tweeted on Tuesday that any change to the corporate AMT would have massive revenue effects.

Batchelder said repealing the corporate AMT could cause a revenue shortfall of an additional $300 billion. That would force Republicans to find significantly more revenue in other places to fit their tax bill into a specific budget window — by taking away deductions or increasing rates.

That's not the only error

For instance, as Politico's Brian Faler noted, the TCJA would impose a new tax on university endowments but does not define an endowment. Universities with large financial holdings have multiple accounts to generate income, but it is not clear which of those would qualify toward the new tax.

Other issues with pass-through businesses and a one-time tax on foreign profits of multinational corporations also were noticed after the legislation's passage.

To solve the problems, Republicans are beginning the process of a conference committee. The committee will be made up of members of both chambers — mostly from the tax-writing House Ways and Means and Senate Finance committees — to hash out differences in the bills and work out the errors.

From there, the House and Senate would have to approve the compromise bill. It is unclear how quickly the conference bill would get a vote, but House Speaker Paul Ryan said Wednesday that the GOP is aiming to have a bill on President Donald Trump's desk by Christmas.

Alaskan whaling captains can avoid tax on up to $10,000 of whaling-related expenses per year. Costs they can deduct include purchasing and maintaining the boat, weapons and gear, food and supplies for the crew, and storing and distributing the catch.

Oddly, whaling captains report these costs as a charitable deduction on their tax returns. Unless someone is authorized by the Alaska Eskimo Whaling Commission, however, whaling is illegal in the United States.

When a business pays for capital improvements — like building a new office or buying a new machine — it typically deducts those costs over the life of the asset, which could translate into decades. A special exception exists in the tax code for “certain motorsports entertainment complex property placed into service before Jan. 1, 2017,” which refers to NASCAR tracks and other racing facilities. The exception allows businesses to deduct the costs over seven years, which is much faster than usual.

If you take care of an “exceptional tree” in Hawaii, you can deduct up to $3,000 on your state taxes of what it costs you. A local county arborist advisory committee must declare it an exceptional tree and you’ll need an affidavit from the arborist stating the tree’s type and location and what you paid to maintain it. You can take this deduction only once every three years.

If you live in Florida and want to pay lower property taxes — perhaps on your second home that has a lot of open land — consider renting some cows. Under greenbelt laws, if you use your land for agricultural purposes, your real estate taxes are based on the agricultural value of the land, not its market value.

This deduction doesn’t explicitly state how many cows you have to raise or even that you have to own them. Developers often let a few dozen rented cows roam their land — sometimes even during construction — to lower their property tax bills.

If you live to be 100 years old, moving to New Mexico will cut your tax bill because you will pay no tax to the state. A caveat: You cannot take the deduction if you claim someone as a dependent. Paying no state income tax might not be a huge break, but if it’s available, take it.

If you’re searching for a tax loophole you can use — one that doesn’t benefit only the 1 percent — the IRS allows qualified performing artists to deduct certain expenses. To qualify, you must have performed for at least two different employers during the year and received at least $200 from each, had business expenses that exceeded 10 percent of your performing arts income and claimed less than $16,000 in adjusted gross income for the year. If you’re married, that $16,000 limit applies to both your spouse’s and your incomes.

Install a pool for medical treatments and you could be in for a big tax break. One taxpayer suffering from emphysema and bronchitis was prescribed swimming by his doctor as part of his treatment, so he built a pool and wrote off a portion of the costs as a medical expense. He could deduct only the amount by which the installation cost exceeded the home’s increase in value, but he did get to include upkeep costs.

See: 19 Medical Expenses You Can Deduct From Your taxes

Deducting body oil on your taxes might sound downright crazy, but you might be able to. One professional bodybuilder needed to shine a little brighter during competition so he applied body oil. When tax season rolled around, he included the cost as a business expense. At first, the IRS disallowed the deduction, but the Tax Court approved because using the oil made him more competitive.

Meat packers, butchers and processing plants in South Carolina can earn a $75 state tax credit for each deer carcass they process and donate. You must be licensed with the state or the U.S. Department of Agriculture and you must have a contract with a qualified nonprofit that distributes food to the needy. If you use any of the deer for commercial purposes, you will not qualify for the donation.

SEE ALSO: The fight over the Republican tax plan isn't over — here are the biggest differences between the House and Senate bills