Who will be Time's 2017 Person of the Year? Check out the shortlist 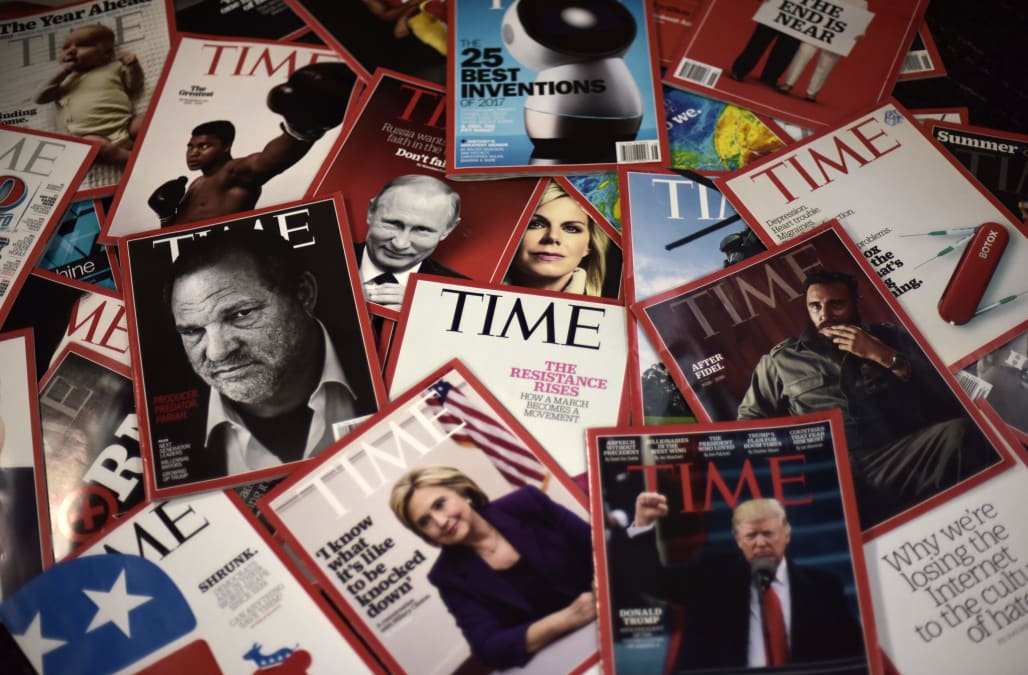 Donald Trump may not be very happy about landing on the same iconic list as some of the top adversaries he loves to provoke.

The American president has made the shortlist for TIME’s Person of the Year, along with North Korean leader Kim Jung Un, special counsel and former FBI director Robert Mueller, and San Francisco 49ers player Colin Kaepernick.

TIME, which revealed its list of finalists Monday on TODAY, has awarded the Person of the Year title since 1927. Last year, TIME bestowed the designation on Trump, who had just become president-elect after stunning the nation — and the world — by winning the White House race.

The magazine makes a selection each year of the person who has most influenced the news and the world in the past year, “for good or ill.” In recent years, the title also has been bestowed upon a group of individuals as well as major concepts, such as “the whistleblowers” and “the endangered Earth.”

TIME’s recipient in 2015 was German Chancellor Angela Merkel. The year before that, 2014, the Person of the Year were the Ebola fighters.

TIME’s 2017 list of finalists reflect a wide variety of nominees that range from heads of states to a former NFL player and a multibillionaire who changed the way people shop.

The magazine will reveal its Person of the Year live Wednesday on TODAY.

Until then, here are the candidates, in no significant order:

TIME Person of the Year shortlist

"Dreamers" -- undocumented immigrants brought to the U.S. by their parents as children who had been protected under the Obama-era DACA program, which the Trump administration has plans to end

Patty Jenkins, 'Wonder Woman' director and the first woman to direct a film that made over $100 million in its first weekend

#MeToo movement for survivors of sexual harassment and assault

Jeff Bezos Founder and chief executive of Amazon.com, Bezos is the richest person in the world. He saw his net worth top $100 billion last month following Black Friday sales, although it has since dropped just below the milestone. Bezos, who also owns The Washington Post, was TIME’s Person of the Year in 1999.

Donald Trump The U.S. president embraced the Person of the Year moniker in 2016, calling it "a tremendous honor" at the time. However, he recently expressed his thoughts about possibly receiving the title for a second consecutive year on, where else, Twitter.

Time Magazine called to say that I was PROBABLY going to be named “Man (Person) of the Year,” like last year, but I would have to agree to an interview and a major photo shoot. I said probably is no good and took a pass. Thanks anyway!

The #MeToo Movement The roots of the movement started last year after a 2005 audio recording of Donald Trump bragging in vulgar terms about how he treated women surfaced during the presidential campaign.

But after Hollywood producer Harvey Weinstein was flooded with dozens of sexual assault allegations, the movement gained huge momentum as thousands of women used the #MeToo hashtag to help demonstrate how pervasive of a problem harassment is.

Kim Jong Un Trump has called him a “sick puppy” as well as his favorite, “little rocket man,” yet the insults only embolden the North Korean leader. They also intensify tensions within the international community over concerns about Kim’s arsenal of ballistic missiles and North Korea's nuclear weapons program.

Colin Kaepernick His decision to silently take a stand — or specifically, a knee — against racial inequality cost him a promising and lucrative career in the NFL. It also turned the former quarterback for the San Francisco 49ers into a flashpoint between professional athletes, in and outside of football, and politicians, particularly Trump.

Kaepernick recently filed a collusion grievance against the NFL owners, saying he has been blackballed within the league.

Xi Jinping In October, China’s ruling Communist Party voted to elevate President Xi JinPing to the same exalted status as its founding founder, Mao Zedong, by writing Xi's name and ideas into the party constitution. With the move, Xi, who was elected into office in 2012, now appears set to govern China far beyond the next five years.

The Dreamers The name applies to nearly 800,000 undocumented immigrants who arrived in the United States as young children. The group are at risk of deportation as the Trump administration rescinds the Deferred Action for Childhood Arrivals program, commonly referred to as DACA.

Mohammed bin Salman Elevated by his father, Saudi King Salman, to crown prince this past June, Prince Mohammed is one of the most dynamic royals in the Arab world’s wealthiest nation. Depending on who’s describing him, the 32-year-old heir has either demonstrated bold and revolutionary leadership — or proof of his reckless and impulsive nature.

Robert Mueller The former FBI director was appointed in May as the special counsel leading the investigation of the Russian government's efforts to interfere with the 2016 U.S. presidential election. Mueller's probe already has netted several Trump advisers who have admitted contacting Russian officials, most recently former National Security Adviser, Michael Flynn.

Patty Jenkins Her mega-blockbuster “Wonder Woman” made history when the movie raked in the biggest domestic opening ever for a female director. The flick also made Jenkins the first female director of an American studio superhero movie.