Boy, 6, tells Santa in letter: 'You don't know the troubles I've had' 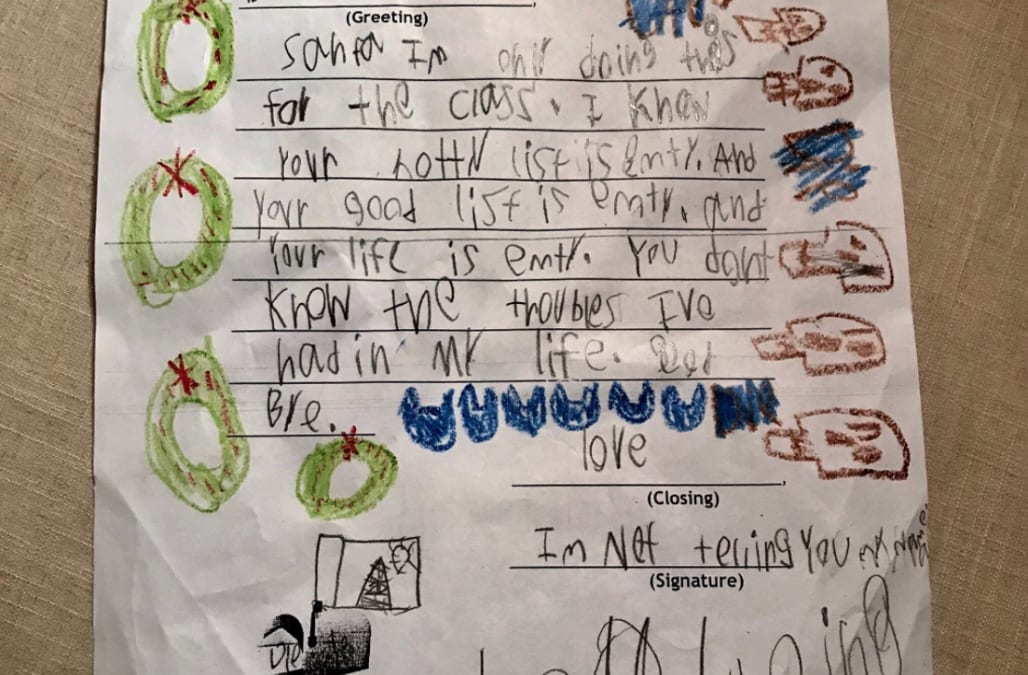 Dec 4 (Reuters) - A 6-year-old Virginia boy has shaken up social media with an all-too-skeptical letter to Santa Claus in which he says he knows that jolly Saint Nick's life is empty and that Santa had no idea whether he had been naughty or nice.

The boy's mother, Sarah McCammon, posted the "Dear Santa" letter on Twitter on Sunday and by Monday it was featured on Moments, which Twitter considers its most popular or relevant topics.

The boy signs off with "love" but refuses to identify himself, writing, "Im not telling you my name."

McCammon, a reporter on National Public Radio's national desk, said she has always told her children that Santa is a "fun story" and that Christmas presents come from real people.

"We've encouraged them to keep the truth about Santa to themselves at school," she said via email.

But then her younger son was asked to write a letter to Santa at school. "So he did," she wrote on a Twitter post accompanying a photo of the hand-written letter.

Some people responding on Twitter were impressed with the boy's wisdom, while others expressed genuine concern. McCammon was obviously proud of her first-grader, calling the letter "amazing."

"Our son is creative and a bit precocious, so knowing his sense of humor, we thought it was hilarious," McCammon said.

Even so, she and her husband were curious about the "troubles" their boy mentioned. "He said he was referring to his older brother - specifically, we gather, the fact that his brother often beats him at video games," McCammon said. (Reporting by Daniel Trotta; Editing by Diane Craft and Leslie Adler)