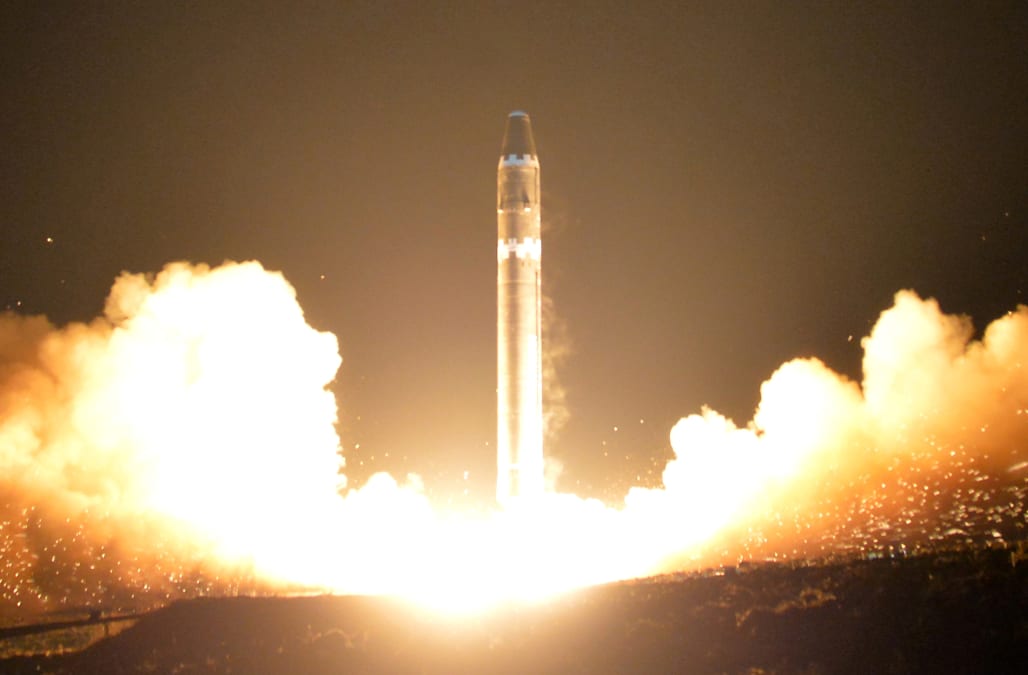 North Korea launched an intercontinental ballistic missile towards Japan early Wednesday morning. The missile reached an altitude of about 2,800 miles, with initial estimates saying it will be the highest altitude reached by a North Korean missile.

In the last two decades, North Korea has launched more than 40 missiles in major provocations, with around 30 in the last two years alone.

Beginning in 1976, North Korea began developing missiles using Scud-B from the Soviet Union and launchpads from Egypt. Through the 1980's and 1990's, it began testing additional missiles, like the Rodong in 1990, and the Nodong-1 missile in 1993.

There have been more than a dozen ballistic missile tests in 2017 so far, and here's what we know about each of them:

Every missile launch conducted by North Korea in 2017

It was the first missile launched into the Sea of Japan since US President Donald Trump took office. General John Hyten, the commander of US Strategic Command, said this launch marked a significant advancement for North Korea.

The tested missiles flew 620 miles (1,000 kilometers) before landing in the Sea of Japan. The US also began installing the a missile defense system (THAAD) in South Korea as protection against missile attack from the North.

March 22: North Korea tested a mobile-launched missile that exploded within minutes of taking off.

The type of missile launched was not confirmed. The launch signaled increasing frequency of North Korean missile testing.

April 5: A ballistic missile was fired ahead of a summit between US President Donald Trump and China’s President Xi Jinping in Florida.

Discussing North Korea’s weapons programs was high priority for the leaders' meeting, raising speculation that the launch might have been timed to get their attention.

The failed launch coincided with a massive military parade to commemorate the 105th birth anniversary of Kim Il-sung, the country’s founder and grandfather of current leader, Kim Jong-un.

May 13: An intermediate range Hwasong-12 ballistic missile lands in the sea near Russia.

Japanese Defense Minister Tomomi Inada said at the time that the missile could be a new type. It flew for 30 minutes before dropping into the sea.

The day before the missile launch, North Korea said it had developed the capability to use nuclear-tipped missiles to strike the US mainland, although Western missile experts said at the time that the claim was exaggerated.

May 29: A short range Scud-class ballistic missile was fired and flew about 280 miles (450 kilometers).

North Korea has a large stockpile of the short-range missiles, originally developed by the Soviet Union.

"We assess that North Korea intended to show off its various missile capabilities," Roh Jae-cheon, a spokesman for South Korea's Joint Chiefs of Staffs said.

North Korea has a history of conducting weapons test on or around July 4, America's Independence Day. Kim said the US would be "displeased" to receive a "package of gifts" on Independence Day.

(Photo credit should read STR/AFP/Getty Images)
A photo taken on July 6, 2017 shows a mass dance event as part of celebrations marking the July 4 launch of the Hwasong-14 intercontinental ballistic missile, in Pyongyang. Fireworks lit up the sky over Pyongyang's Juche Tower as North Korea celebrated its launch of intercontinental ballistic missile, a milestone in its decades-long weapons drive. On July 4 -- the United States' Independence Day -- it launched a Hwasong-14 rocket that analysts and overseas officials said had a range of up to 8,000 kilometres, which would put Alaska and Hawaii within reach. / AFP PHOTO / KIM Won-Jin (Photo credit should read KIM WON-JIN/AFP/Getty Images)

July 28: North Korea launched a second ICBM, called the Hwasong-14, that Kim said demonstrated his country can hit the US mainland.

A day before the exercises, Pyongyang warned the US was risking an "uncontrollable phase of a nuclear war."

The missile was thought to be the first nuclear-weapon capable ballistic missile the North has ever sent over Japan.

September 15: An intermediate-range ballistic missile was fired over Japan, marking the first launch since the UN imposed fresh sanctions on North Korea.

The day before, North Korea threatened to sink Japan and turn the US to "ashes and darkness"because of the two countries spearheading of the imposed sanctions.

November 29: North Korea fired an intercontinental ballistic missile that traveled about 1,000 kilometers, or over 620 miles, and landed in the Sea of Japan.

The missile reached an altitude of about 2,800 miles, and early estimated say it could be highest altitude reached by the country's missile program so far.

SEE ALSO: Images of North Korea's latest missile launch reveal a big problem for the US