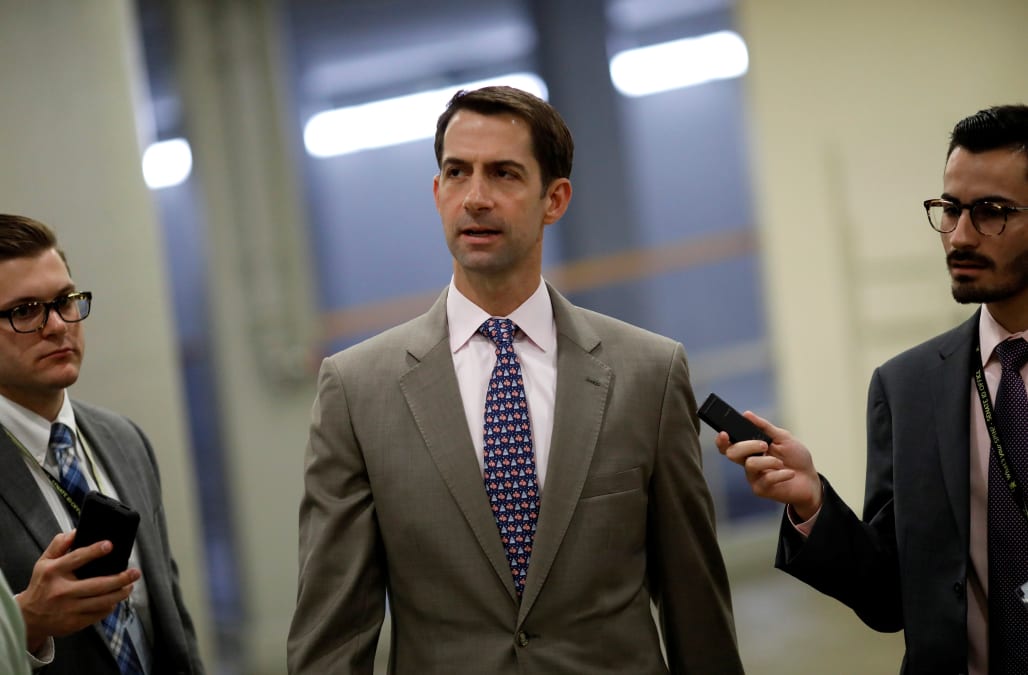 Several CIA veterans reacted with alarm on Thursday to news that Republican Sen. Tom Cotton could replace Mike Pompeo as head of the intelligence agency within the next two months.

It is unclear whether Cotton, a combat veteran and Senate freshman, would accept the position if nominated by President Donald Trump. Cotton's spokesman said on Thursday that his "focus is on serving Arkansans in the Senate.”

But Trump's chief of staff John Kelly is reportedly spearheading a national security shake-up that would involve installing Pompeo as secretary of state and Cotton as CIA director. Rex Tillerson, whose leadership of the State Department has been criticized by both career department employees and the president, would be ousted.

"This is an awful appointment," said Paul Pillar, a 28-year veteran of the CIA, of Cotton's potential nomination. "Sen.Cotton is a highly ideological individual who is not well-suited to lead an agency part of whose core mission is objective analysis."

Pillar pointed to a letter Cotton wrote to top Iranian leaders in March 2015 warning them against striking a nuclear deal with then-President Barack Obama. The letter was signed by 47 Senate Republicans and infuriated the White House, which viewed it as an inappropriate congressional intervention in sensitive diplomatic negotiations.

"We will consider any agreement regarding your nuclear weapons program that is not approved by the Congress as nothing more than an executive agreement between President Obama and Ayatollah Khamenei," the letter read.

"It's hard to imagine someone who would do something like that, something so contrary to accepted foreign policy procedure, providing objective leadership on issues related to Iran," Pillar said.

Former CIA analyst Ned Price, who served as a National Security Council spokesman under Obama, shared concerns over the future of the US's relationship with Iran if placed in the hands of Pompeo at the State Department and Cotton at the CIA.

"I certainly think Cotton will continue much of what Pompeo started," Price said, referring to a common perception of Pompeo's CIA leadership as partisan and motivated, at least in part, by loyalty to Trump.

"And with these two at the helm of these institutions, it's much more likely that we'll find ourselves moving towards regime change with Iran," Price added. "The Iran deal is toast — that's a given — but the march to war will become much more viable. It's something they've coordinated on even in their current posts, and it surely will pick up if this comes to pass."

As the New Yorker's Jeffrey Toobin noted in a lengthy profile of Cotton published earlier this month, undermining and the Iran nuclear deal in an attempt to wholly dismantle it has been a touchstone of Cotton's young Senate career. (He was elected in 2015.)

"I told the President in July that he shouldn't certify that Iran was complying with the agreement,” Cotton told Toobin. "Putting aside the issue of technical compliance or noncompliance, it's clear that the agreement is not in our national interest."

Lack of experience working in intelligence

Beyond Cotton's position on the Iran deal, however, some CIA veterans are nervous about his lack of experience working with the intelligence community.

"He seems bright enough," said former CIA counsel Bob Deitz. "He went to my favorite law school. But it is bothersome that, so far as one can tell, he knows absolutely nothing about the intelligence community. The CIA is not an easy agency to lead because of its varied missions. Of course he may be a quick learner. I hope that is true."

While serving in the Army in 2006, Cotton wrote a letter to three New York Times reporters who broke a story about a classified program run by the CIA and the Treasury Department that tracked the financing of terror networks. He told the reporters that they should be in jail for publishing the details of the program.

"Having graduated from Harvard Law and practiced with a federal appellate judge and two Washington law firms before becoming an infantry officer, I am well-versed in the espionage laws relevant to this story and others — laws you have plainly violated," Cotton wrote. "By the time we return home, maybe you will be in your rightful place: not at the Pulitzer announcements, but behind bars."

As The Daily Beast's Spencer Ackerman noted, Cotton was "plainly wrong about the law."

"Leaking classified material is criminal; publishing it is not," Ackerman wrote.

Former congressional intelligence staffer Mieke Eoyang, now the vice president for the national security program at the think tank Third Way, said on Twitter that one upside to Cotton running the CIA is that he would be forced to suppress his partisan outbursts.

"He'd stop organizing counterproductive Senate letters. He'd have to shut up about his successes. He'd have to take the hit for any intelligence failures," Eoyang said. She added that "classified information restrictions limit what he can say/do."

CIA -- Central Intelligence Agency
An aerial view of the U.S. Central Intelligence Agency (CIA) headquarters in Langley, Virginia, U.S. on January 18, 2008. To match Special Report USA-CIA-BRENNAN/ REUTERS/Jason Reed/File Photo
LANGLEY, VA - JANUARY 21: The logo of the CIA is seen during a visit ofUS President Donald Trump the CIA headquarters on January 21, 2017 in Langley, Virginia . Trump spoke with about 300 people in his first official visit with a government agaency. (Photo by Olivier Doulier - Pool/Getty Images)
The Central Intelligence Agency (CIA) is a civilian intelligence agency of the United States government. It is an independent agency responsible for providing national security intelligence to senior United States policymakers.
LANGLEY VA, MAY 21: The CIA Memorial Wall in the lobby of the CIA Headquarters has stars signifying the agents and contractors killed in the line of duty working for the CIA. The headquarters is in Langley VA, May 21, 2014. (Photo by John McDonnell/The Washington Post via Getty Images)
UNITED STATES - JANUARY 19: Aerial of C.I.A. Headquarters in Virginia (Photo by Carol M. Highsmith/Buyenlarge/Getty Images)
UNITED STATES - AUGUST 07: Aerial view of CIA headquarters, Langley, Virginia (Photo by Carol M. Highsmith/Buyenlarge/Getty Images)
Wall inside the CIA honors members of the CIA who died in the service of their country. (Photo by Larry Downing/Sygma/Sygma via Getty Images)
Technician working on a tape recording inside the CIA. (Photo by Larry Downing/Sygma/Sygma via Getty Images)
Library with all international newspapers inside the CIA. (Photo by Larry Downing/Sygma/Sygma via Getty Images)
Up Next

Others, like longtime CIA intelligence officer Glenn Carle, are concerned about Cotton's views on torture. Cotton told CNN last November that "waterboarding isn't torture," arguing that "Donald Trump is a pretty tough guy and he's ready to make those tough calls" when it comes to the use of controversial and extreme interrogation methods.

In 2015, Cotton said that "the only problem with Guantánamo Bay is there are too many empty beds and cells there right now."

"We should be sending more terrorists there," Cotton said in reference to the infamous detention facility. "As far as I'm concerned, every last one of them can rot in hell. But as long as they can't do that, they can rot in Guantánamo Bay."

Carle, who wrote a book about his involvement in the interrogation of a man believed in the early 2000's to be a top Al-Qaeda member, said that Cotton is "wholly unfit" to be CIA director.

"It will be difficult" for the CIA's career employees "to work under someone who is a zealot and thinks that torture is not torture," Carle said. "Cotton is an ideologue and a partisan, and his views are not only out of the mainstream — they challenge tenets of our core American values."

NOW WATCH: A North Korean defector tells us what life was like under a dictatorship