The Navajo code talkers that helped the U.S. win WWII 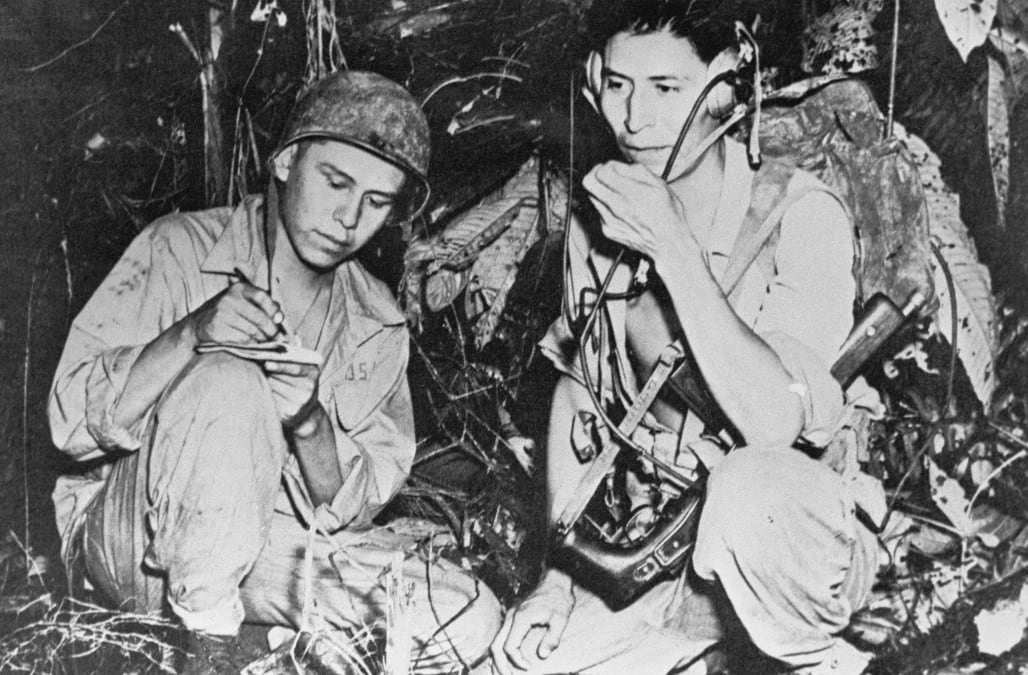 Shortly after the entry of the United States into World War II, Philip Johnston approached the Marine Corps with a proposal that could help tip the scales in the Pacific Theater.

Johnston was the child of missionaries, and had grown up on a Navajo reservation. He was one of just a handful of outsiders who could speak the Navajo language fluently.

He proposed developing a code based on this language, one that could be transmitted and decrypted quickly and orally on the battlefield — and that would be virtually impossible for the Japanese to crack.

This idea was not without precedent. Cherokee and Choctaw soldiers had both effectively used their native languages to send coded messages on the Western Front during the final months of World War I.

The Corps accepted Johnston’s proposal, and recommended the immediate recruitment of 200 Navajos to develop a code.

Among the first recruits was Chester Nez. As a child growing up in Bureau of Indian Affairs boarding schools, Nez had his original Navajo name replaced with Chester, after President Chester A. Arthur. He was forbidden from speaking his native tongue — students who did so were beaten or had their mouths washed out with soap.

In the spring of 1942, Nez and 28 other recruits assembled at Camp Pendleton in California, and went to work formulating their code.

"All those years, telling you not to speak Navajo, and then to turn around and ask us for help with that same language.... It still kind of bothers me." Chester Nez, Navajo code talker

Over the course of 13 weeks, the code was developed, practiced, and committed to memory.

It grew into a sprawling dictionary, tailored for precise communication in every conceivable battlefield situation.

The code ranged from simple letters (“A” could be communicated as the Navajo words for ant, apple, or axe) to vehicles (Dive bomber = “chicken hawk,” submarine = “metal fish”) to direct or approximate translations of hundreds of verbs such as capture, escape, entrench, flank, halt, and target.

Once the code was complete, the code talkers became invaluable communications assets. As the war went on, some 400 Navajos were recruited and trained in the code.

"We acted as coding machines, transmitting messages that would have taken a couple of hours in just a couple of minutes." Chester Nez, Navajo code talker

On the battlefields of the Pacific Theater, the code proved to be uncrackable.

Even when the Japanese managed to capture and torture Navajo Sergeant Joe Kieyoomia, they couldn’t crack it — though he spoke Navajo, he hadn’t been trained in the code, so the encrypted messages read as an indecipherable mess of words.

The Navajo code talkers played crucial roles in every Marine offensive in the Pacific, from Guadalcanal in 1942 to Iwo Jima in 1945.

Code talkers from more than a dozen other tribes such as the Seminole, Comanche, and Meskwaki were also deployed as code talkers in more limited numbers in Europe and North Africa.

"The Japanese tried, but they couldn’t decipher it.... Not even another Navajo could decipher it if he wasn’t a code talker." Chester Nez, Navajo code talker
9 PHOTOS
Navajo 'code talkers' who helped the US win WWII
See Gallery

Two U.S. Marine Navajo 'code talkers', signalmen who used a slightly modified version of their native language, send a radio signal during the battle of Bougainville in 1943. The Japanese were never able to break this code. (Photo via Getty Images)

Chester Nez, one of the original 29 Navajo code talkers.

Discover More Like This
HIDE CAPTION
SHOW CAPTION
of
SEE ALL
BACK TO SLIDE
"Were it not for the Navajos, the Marines would never have taken Iwo Jima." Major Howard Connor, 5th Marine division signal officer

Many of the code talkers returned home from the war to face discrimination, hardship, and the lingering trauma of combat. They were not even allowed to speak about the invaluable role they played until the code operation was declassified in 1968.

In 2001, the original 29 creators of the Navajo code were honored with the Congressional Gold Medal.

More from Mashable:
Trump's called Elizabeth Warren 'Pocahontas' at least 26 times—and it's not OK
KitchenAid Mixers are the hot item this Black Friday, with some more than $300 off
What to stream on Netflix in December