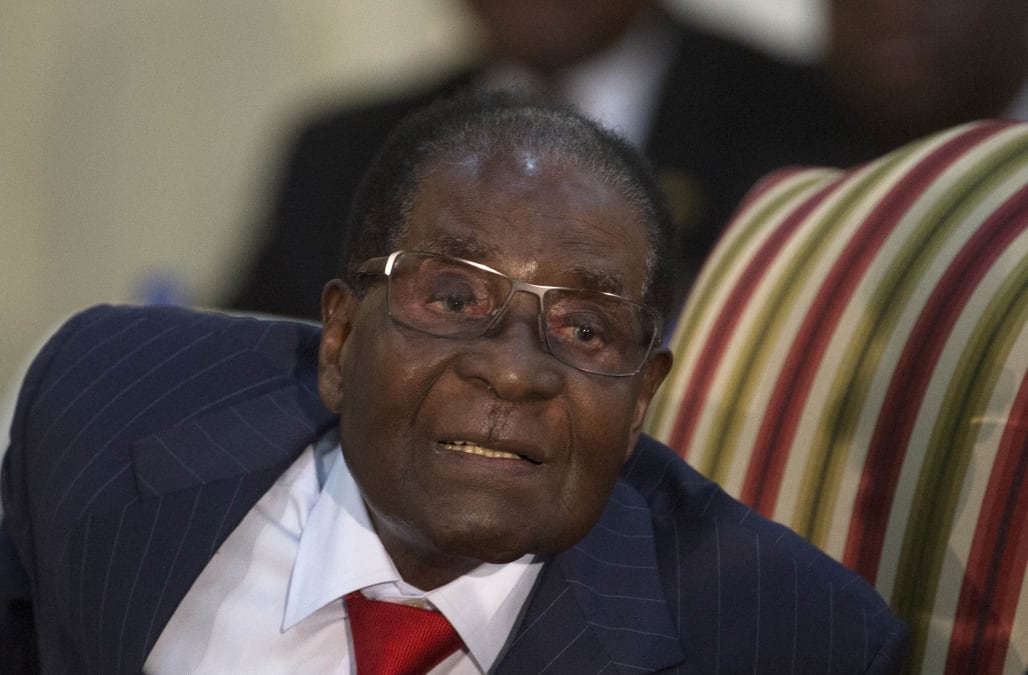 HARARE, Nov 15 (Reuters) - Zimbabwe's military seized power early on Wednesday targeting "criminals" around President Robert Mugabe but gave assurances on national television that the 93-year-old leader and his family were "safe and sound."

Soldiers and armored vehicles blocked roads to the main government offices, parliament and the courts in central Harare, while taxis ferried commuters to work nearby, a Reuters witness said.

"We are only targeting criminals around him (Mugabe) who are committing crimes that are causing social and economic suffering in the country in order to bring them to justice," Zimbabwe Major General SB Moyo, Chief of Staff Logistics, said on television.

"As soon as we have accomplished our mission, we expect that the situation will return to normalcy."

Neither Mugabe nor his wife Grace, who has been vying to succeed her husband as president, have been seen or heard from.

Zimbabwe's opposition Movement for Democratic Change called for a peaceful return to constitutional democracy, adding it hoped the military intervention would lead to the "establishment of a stable, democratic and progressive nation state."

The leader of Zimbabwe's influential liberation war veterans called for South Africa, southern Africa and the West to re-engage Zimbabwe, whose economic decline over the past two decades has been a drag on the southern African region.

"This is a correction of a state that was careening off the cliff," Chris Mutsvangwa told Reuters. "It's the end of a very painful and sad chapter in the history of a young nation, in which a dictator, as he became old, surrendered his court to a gang of thieves around his wife."

Finance Minister Ignatius Chombo, a leading member of the so-called 'G40' faction of the ruling ZANU-PF party led by Mugabe's wife Grace, had been detained by the military, a government source said.

Mugabe, the self-styled 'Grand Old Man' of African politics, has led Zimbabwe for the last 37 years.

In contrast to his elevated status on the continent, Mugabe is reviled in the West as a despot whose disastrous handling of the economy and willingness to resort to violence to maintain power destroyed one of Africa's most promising states.

Soldiers deployed across the Zimbabwe capital Harare on Tuesday and seized the state broadcaster after Mugabe's ruling ZANU-PF party accused the head of the military of treason, prompting frenzied speculation of a coup.

Just 24 hours after military chief General Constantino Chiwenga threatened to intervene to end a purge of his allies in Mugabe's ZANU-PF, a Reuters reporter saw armored personnel carriers on main roads around the capital.

The United States and Britain advised their citizens in Harare to stay indoors because of "political uncertainty."

The southern African nation had been on edge since Monday when Chiwenga, Commander of the Zimbabwe Defence Forces, said he was prepared to "step in" to end a purge of supporters of sacked vice president Emmerson Mnangagwa.

Only a few months ago, Mnangagwa, a former security chief nicknamed "The Crocodile," was favorite to succeed his life-long political patron but was ousted a week ago to pave the way for Mugabe's 52-year-old wife Grace to succeed him.

'POLITICS OVER THE GUN'

Chiwenga's unprecedented statement represented a major escalation of the struggle to succeed Mugabe, the only leader Zimbabwe has known since it gained independence from Britain in 1980.

Mugabe chaired a weekly cabinet meeting in the capital on Tuesday, officials said, and afterwards ZANU-PF said it stood by the "primacy of politics over the gun" and accused Chiwenga of "treasonable conduct ... meant to incite insurrection."

The previous day, Chiwenga had made clear the army's refusal to accept the removal of Mnangagwa - like the generals a veteran of Zimbabwe's anti-colonial liberation war - and the presumed accession of Grace, once a secretary in the government typing pool.

Local government minister Saviour Kasukuwere, a leading figure in her relatively youthful 'G40' faction, refused to answer Reuters questions about the situation in Harare. "I'm in a meeting," he said, before hanging up shortly before midnight.

Zimbabwe's Herald newspaper, another government mouthpiece, ran an article on its front page saying Zanu-PF was "unfazed by Chiwenga," according to a picture of its front page posted on Twitter.

Neither Mugabe nor Grace have responded in public to Chiwenga's remarks and state media did not publish his statement. The Herald posted some of the comments on its Twitter page but deleted them.

The head of ZANU-PF's youth wing, which openly backs Grace, accused the army chief of subverting the constitution.

"Defending the revolution and our leader and president is an ideal we live for and if need be it is a principle we are prepared to die for," Youth League leader Kudzai Chipanga said at the party's headquarters in Harare.

Grace Mugabe's rise has brought her into conflict with the independence-era war veterans, who enjoyed privileged status in Zimbabwe until the last two years when they spearheaded criticism of Mugabe's handling of the economy.

In the last year, a chronic absence of dollars has led to long queues outside banks and an economic and financial collapse that many fear will rival the meltdown of 2007-2008, when inflation topped out at 500 billion percent.

Imported goods are running out and economists say that, by some measures, inflation is now at 50 percent a month.

According to a trove of intelligence documents reviewed by Reuters this year, Mnangagwa has been planning to revitalize the economy by bringing back thousands of white farmers kicked off their land nearly two decades ago and patching up relations with the likes of the World Bank and IMF.

More from Aol.com:
Reports from Zimbabwe: Army vehicles in capital city, explosions heard
U.S. citizen facing subversion charges in Zimbabwe released from jail
A Picture and its Story: Reaching out to rescue a Rohingya woman