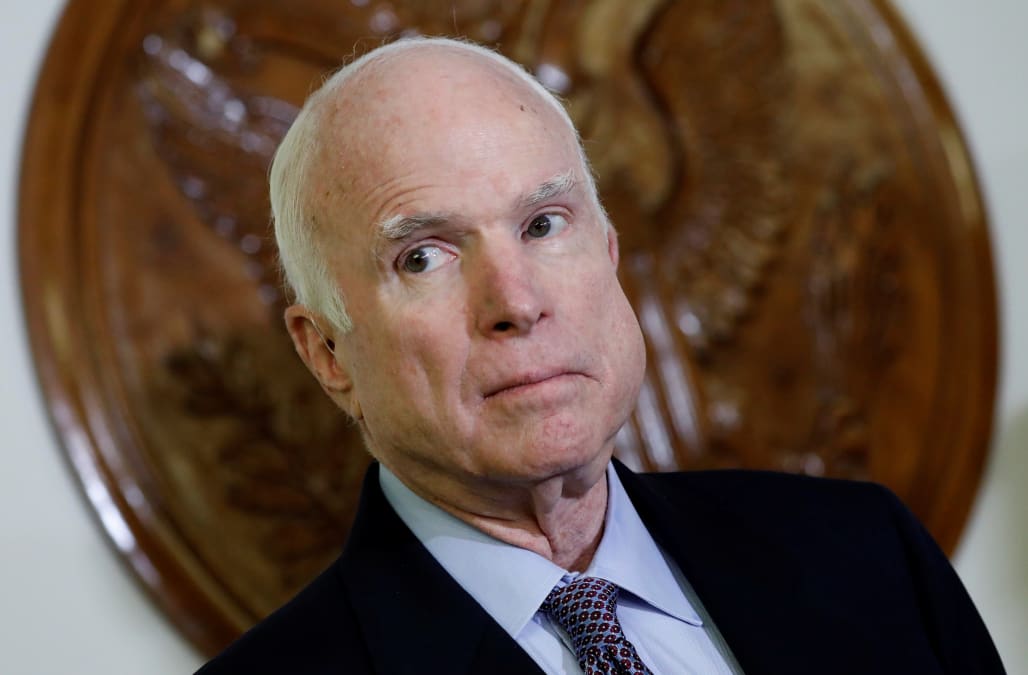 "There's nothing 'America First' about taking the word of a KGB colonel over that of the American intelligence community," McCain said in a statement. "There's no 'principled realism' in cooperating with Russia to prop up the murderous Assad regime, which remains the greatest obstacle to a political solution that would bring an end to the bloodshed in Syria."

McCain was referring to Syrian president Bashar al-Assad, a strongman and authoritarian leader who has been accused of multiple human rights abuses since he took power.

"Vladimir Putin does not have America's interests at heart," McCain continued. "To believe otherwise is not only naive but also places our national security at risk."

Putting the Trump-Russia timeline in perspective:

The Arizona Republican's statement came following Trump's comments to reporters Saturday morning about a meeting he had with Putin on the sidelines of the Asia-Pacific Economic Cooperation summit.

He added that whenever they had met, Putin denied ordering Russia's election meddling. "I believe, I really believe that when he tells me that, he means it," Trump said. "But he says, 'I didn't do that.' I think he is very insulted by it, which is not a good thing for our country."

Trump has long cast doubt on the intelligence community's conclusion that Russia interfered in the 2016 election, particularly the finding that the Kremlin mounted the effort specifically to help Trump and to hurt his opponent, former Democratic nominee Hillary Clinton.

As part of its investigation into Russia's election interference, the FBI is also looking into whether the Trump campaign colluded with Moscow to tilt the race in his favor.

Special counsel Robert Mueller is also said to be building an obstruction-of-justice case related to Trump's decision to fire Comey in May. The White House said at first that Comey was fired because of his handling of the Clinton email investigation, but Trump later told NBC's Lester Holt that "this Russia thing" was a factor in his decision.

Last month, Mueller indicted Trump's former campaign chairman, Paul Manafort, and his former campaign adviser, Rick Gates, on 12 counts. Mueller's office also unsealed documents revealing that George Papadopoulos, an early foreign policy adviser to the campaign, had been arrested in July and pleaded guilty in early October to one count of lying to federal agents about his contacts with individuals linked to the Russian government. He is now believed to be cooperating with federal authorities.

NOW WATCH: The Secret Service may have been 'impaired' the day JFK was assassinated

RELATED: See McCain through the years:

SEE ALSO: James Comey tweets about 'truth' and 'lies' after Trump lashes out at him