Top US Senate Republican aims for tax bill by year-end 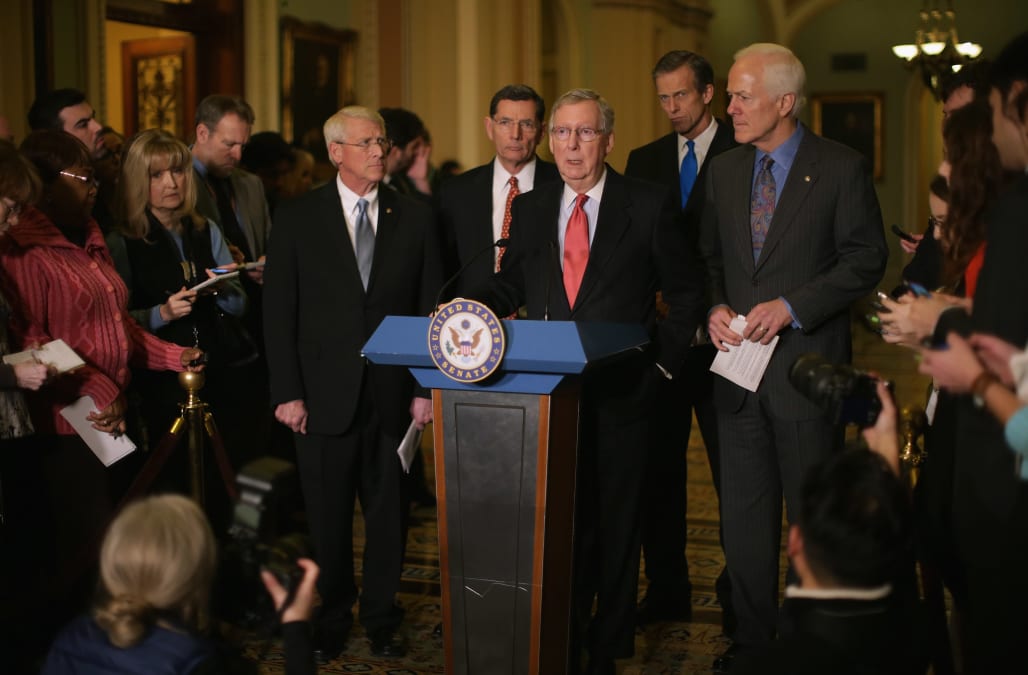 WASHINGTON, Oct 22 (Reuters) - The top U.S. Senate Republican says he believes Congress can pass tax legislation by year-end, and he and other leaders are not abandoning the goal of a revenue-neutral bill.

"We intend to accomplish that between now and the end of the year," Senate Majority Leader Mitch McConnell said on "Fox News Sunday."

However, Republicans, who control both the Senate and House of Representatives, have yet to produce a bill as their self-imposed deadline to overhaul the U.S. tax code by the end of 2017 approaches. The party's lawmakers differ widely on what cuts to make and how to pay for them.

RELATED: 7 states that tax the poor the most

7 states that tax the poor the most

If you're in the poorest 20% of Tennessee residents, you'll end up being taxed at a rate of 10.9%. The middle-class pays a slightly lower 8.4%, while the one-percenters pay 3%. One of the reasons the Volunteer State lands on this list is that it counts on regressive excise and sales taxes to provide over half of the state's tax revenue, even charging sales taxes on groceries, albeit at a lower rate than other items.

Pennsylvania doesn't exactly target the poor; it just taxes all of its residents at high rates. While the bottom fifth of earners end up paying 12% of their income to Harrisburg (the state capital), the middle and 1% earners also have relatively high rates -- 10.1% and 4.2%, respectively. The difference, though, is still felt the hardest at the bottom.

Illinois is often referred to as a "tax hell," and not without reason. It has some of the highest tax rates across the board -- and it has still found itself with troubling deficits. While one-percenters pay 4.6% of their pay in taxes, and middle-income folks have a comparatively high 10.9% rate, the poorest pay a hefty 13.2% of their income. Sales taxes on groceries are a particular burden even though they're charged at a lower rate than taxes on other sales.

While South Dakota has no income tax to speak of -- providing some relief for low-income earners -- it still relies on sales and excise taxes to provide the majority of revenue. That means that while the poor need to fork over 11.3% of their income in the form of taxes, the top 1% are forced to pay only 1.8% of what they have. Full sales taxes on groceries are a key factor for poorer residents.

Like South Dakota, Texas has no state income tax to speak of. That also means that -- like South Dakota -- it must rely heavily on sales and excise taxes. Texas' poorest residents end up turning over 12.5% of their income to taxes. The middle-class tax rate is 8.8%, while the top 1% pays 2.9%.

Perhaps we might see a pattern developing here: Florida also has no state income tax and thus has to rely on regressive taxes to fill that state's coffers. That means poorer residents end up paying 12.9% in taxes, the middle class comes in with an 8.3% rate, and the richest pay only 1.9% of their income.

Finally, we have the odd case of Washington. I say "odd" because while Florida, Texas, and South Dakota have a reputation as small-government, conservative states that like to do away with income taxes, Washington does not occupy that same ground. But because -- like the aforementioned states -- Washington has no income tax to speak of, it relies on very heavy regressive taxes to make ends meet. That means the poorest end up paying a record-high rate of 16.8% of their income in taxes. The middle class comes in with a fairly high 10.1% rate, and the highest earners pay just 2.4%.

Of course, there are trade-offs with these systems. By not having income taxes, some of these states can offer incentives to the highest earners to move within their borders, thus bringing more spending and economic activity with them. At this point, however, that doesn't seem to be providing enormous relief to the poorest of the poor.

A proposal by President Donald Trump, a Republican, cleared a critical hurdle on Thursday, when the Senate approved a budget measure that will allow Republicans to pursue a tax-cut package without support from Democrats.

Trump's plan promises up to $6 trillion in tax cuts but would increase the federal deficit by $1.5 trillion over the next decade.

McConnell told CNN's "State of the Union" that estimated growth for the overall economy in the Republican plan would offset the tax cuts. Asked whether he has abandoned his longtime revenue-neutral goal, McConnell said: "No, actually we're not because that's a rather conservative estimate of how much growth you'll get out of this pro-growth tax reform."

McConnell would not say whether he would back a proposal, reported by the Wall Street Journal on Friday, that Republicans were considering capping contributions to retirement funds.

"We're just beginning the process of actually crafting the bills," he said on CNN. "It's way too early to predict the various details." (Reporting by Pete Schroeder and Doina Chiacu; Editing by Lisa Von Ahn)

More from Aol.com:
Senate passes budget blueprint key to Trump tax effort
Trump will lose reelection and GOP is ‘dead’ if tax reform and health care bills fail, Sen. Lindsey Graham says
Democrats slam Senate budget: 'It will go down in history as one of the worst budgets Congress has ever passed'