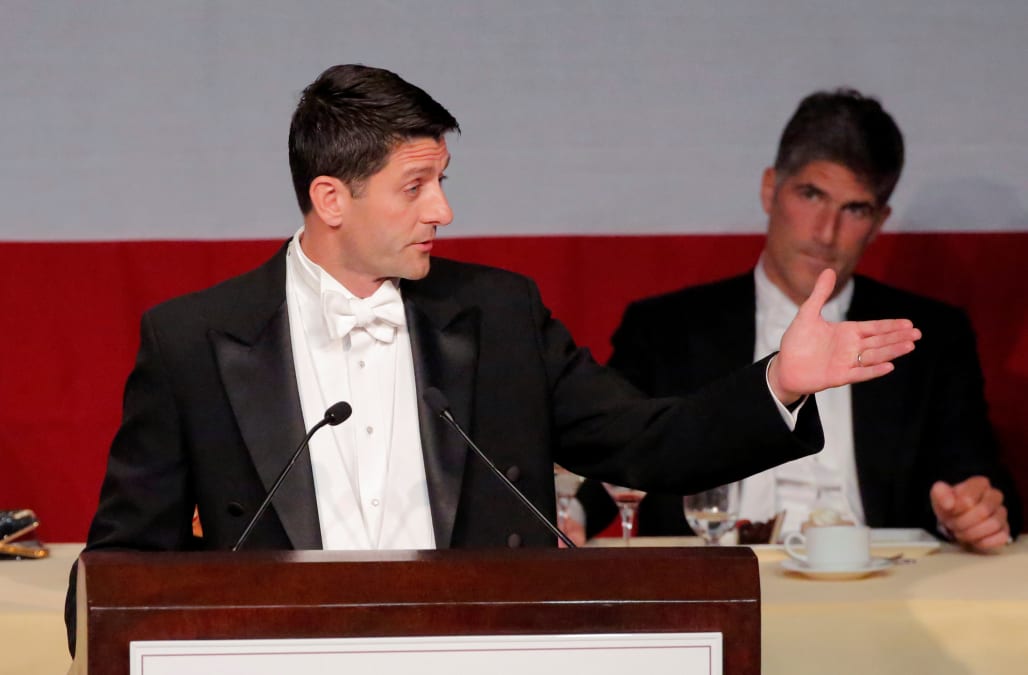 "Please, enough. You sound like the Cabinet when Donald Trump walks into the room," he said as the audience applauded while he walked up to the podium, likely referring to the repeated occurrence of Cabinet officials' praising the president in front of television cameras.

Ryan, R-Wis., was the keynote speaker at the 72nd annual charity dinner for the Alfred E. Smith Foundation, which has close ties to the Catholic Archdiocese of New York. It's named for the Democrats' 1928 presidential nominee, the first Catholic nominated by a major party.

Ryan maintained the tradition of speeches that are traditionally roasts, mostly of high-profile politicians. And many of Ryan's jokes were directed at the president.

RELATED: Paul Ryan through his career

"Every morning, I wake up in my office and scroll Twitter to see which tweets I will have to pretend that I didn't see later," said Ryan, who is often asked what he thinks about Trump's controversial tweets. For months, he responded by saying he didn't respond to the president's tweets.

The white-tie affair gets its most attention in presidential election years, when the major-party nominees roast each other.

Last year's dinner was a rather tense affair, as Trump's comments were biting and he was mostly defensive. Ryan didn't let that night a year ago pass unremarked upon:

"I know last year at this dinner Donald Trump offended some people with his comments, which critics said went too far. Some said it was unbecoming of a public figure and that his comments were offensive. ... Well, thank God he's learned his lesson."

Related: How An Awkward Charity Dinner Summed Up the 2016 Campaign

Schumer was supposed to have been at the dinner, but he missed it because of the late-night votes during which the Senate passed a fiscal year 2018 budget bill.