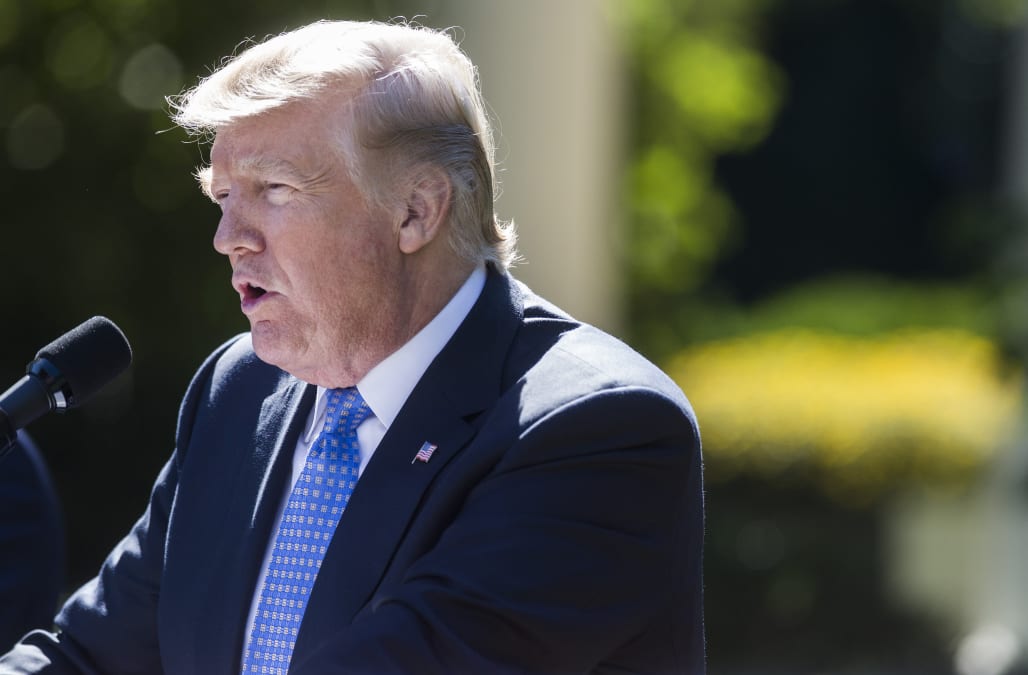 He was for it before he was against it.

President Trump gave whiplash to lawmakers on Wednesday — sending them spinning as he oscillated between opposing views on a bipartisan health care deal.

The deal announced on Tuesday by Lamar Alexander (R- Tenn.) and Patty Murray (D-Wash.) was intended to shore up Obamacare by reviving billions of dollars of subsidies to insurers for two years to help lower-income Americans obtain medical coverage.

The bill is needed after the Trump administration followed through on the President’s plan from last week to end the subsidies — withholding a payment of hundreds of millions of dollars to insurers.

Alexander said Trump had “completely engineered” the bipartisan proposal, something Trump shied away from on Wednesday after expressing his support a day earlier.

“Lamar Alexander’s working on it very hard from our side. And if something can happen, that’s fine,” Trump said. “But I won’t do anything to enrich the insurance companies. ... They’ve been enriched by Obamacare like nothing anybody’s ever seen before.”

“This President keeps zigging and zagging so it’s impossible to govern,” Senate Minority Leader Chuck Schumer said on the Senate floor Wednesday. “Our only hope is that maybe tomorrow he’ll be for this again.”

Insurers say they do not profit from the subsidies but pass on the savings directly to consumers to reduce the deductibles, co-payments and other out-of-pocket medical expenses for low-income Americans.

Ending the subsidies, which are called cost-sharing reduction payments, will likely sow chaos in the 2018 Obamacare health insurance markets.

White House spokeswoman Sarah Sanders said Trump does not support the deal in its current form, although she called it “a good step in the right direction.”

Alexander, meanwhile, said Trump wanted “to be encouraging,” and the senator predicted that his deal would pass “in one form or another” by year’s end.

But backlash from conservatives coupled with Trump’s flip-flopping could doom the bipartisan effort.

In remarks Tuesday in the Rose Garden, Trump called the deal “a very good solution.”

Hours later, Trump addressed the conservative Heritage Foundation, saying that “while I commend” the work by the two senators, “I continue to believe Congress must find a solution to the Obamacare mess instead of providing bailouts to insurance companies.”

The deal includes provisions allowing states faster and easier access to waivers allowing them to shape their own marketplace plans under current law.

It would also restore $106 million for outreach and enrollment programs, which Trump previously cut.

Republicans on Capitol Hill were not optimistic about the measure.

Sen. John Thune (R-S.D.) said the Alexander-Murray agreement has “stalled out” and that its future was an “open question.”

Republicans have repeatedly failed to undo Obamacare, a centerpiece of the President’s campaign pledges.

State attorneys general challenging Trump’s decision asked a federal judge in California to block the move as quickly as possible.

California Attorney General Xavier Becerra asked the judge on Wednesday to force the Trump administration to continue making the payments.

Becerra and New York Attorney General Eric Schneiderman are leading a coalition of 19 attorneys general that have sued over the decision.