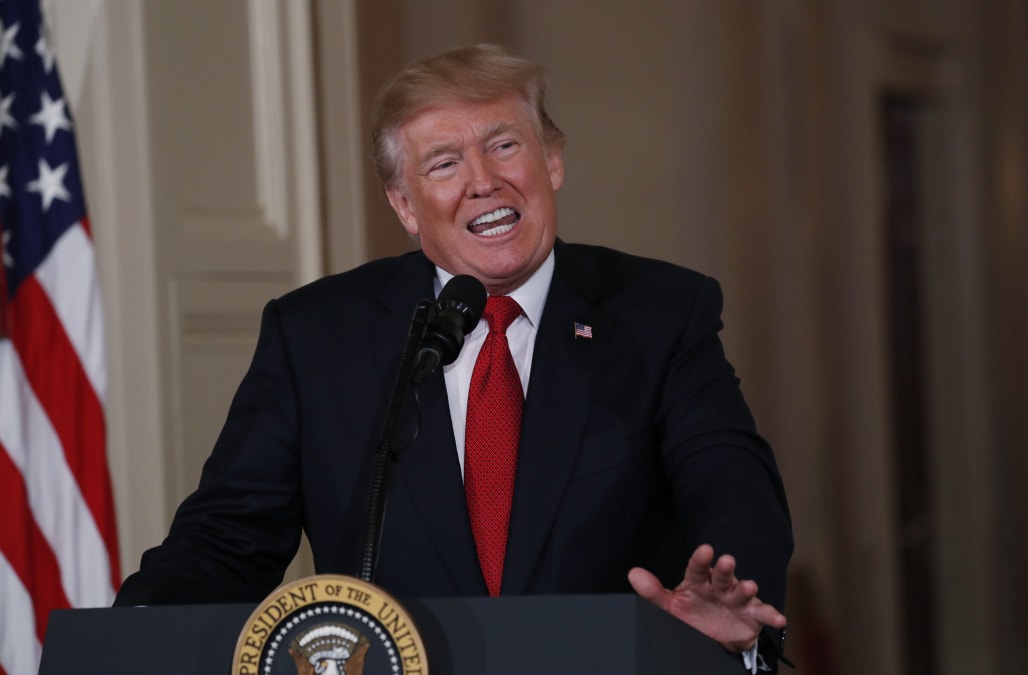 President Donald Trump continued a battle to undermine Obamacare on Thursday, when his administration announced it would cease paying the cost sharing reduction (CSR) payments under the Affordable Care Act. And in doing so, he created another battle that is set to play out among congressional Republicans in coming weeks.

The administration's decision will halt payments to insurers that offset the cost of offering low-income Americans plans with cheaper out-of-pocket costs. Analyses say it could lead to higher premiums for some, an increased number of people without coverage, insurer uncertainty, and destabilization of the Obamacare individual insurance markets in the short-term.

(Here's a complete explanation of the healthcare ramifications of the decision »)

But the move also shifts the onus onto Congress, where Republicans are set to battle over whether to appropriate the payments and help stabilize a law they have tried for the better part of a decade to repeal. Alternatively, they could let the law crumble and try to replace it again.

"While some lawmakers will use this as an excuse to pursue 'bipartisan market stabilization' measures, Obamacare is a fundamentally flawed law that cannot be saved, repaired or bailed out," said Michael Needham, the CEO of the conservative group Heritage Action.

To mitigate any short-term fallout, Congress could pass a bill to appropriate the funds. But that would require a push from influential congressional Republicans.

Some moderate members are calling on Congress to take up a bill to appropriate funding for the payments, while conservatives have come out against the idea.

Thomson ReutersMick Mulvaney, the director of the Office of Management and Budget in the White House, said Trump does not support any bill to appropriate CSRs unless it includes something to further the president's agenda, such as funding for a wall along the US-Mexico border.

House Speaker Paul Ryan applauded the choice by Trump, arguing the payments were on shaky legal ground when they were paid by the executive branch, something the administration said in justifying its decision.

Rep. Jim Jordan of Ohio, a leader of the conservative House Freedom Caucus, also agreed with the decision.

While much of the conservative response applauded the legal grounds for the decision, Ryan and other Republican leaders have come out against a bill to stabilize the markets, one piece of which would include funding the CSRs.

But other Republicans are grappling with the potential consequences: namely, that the move could hurt some of the poorest of the more than 10 million people on the Obamacare exchanges. Rep. Charlie Dent, chair of the moderate Tuesday Group caucus, told CNN that he was concerned by the administration's decision.

"I am fearful now that the president made this announcement that will destabilize the insurance markets, it will raise premiums for a lot of folks," Dent said, saying that Republicans will likely "own this" going forward.

Republican Rep. Ileana Ros-Lehtinen of Florida also tweeted her opposition to the decision.

"Cutting health care subsidies will mean more uninsured in my district," she tweeted. "@potus promised more access, affordable coverage. This does opposite."

Many Republicans wanted Trump to continue the payments to avoid potential downsides. Sen. John Thune, the third-highest ranking GOP Senate member, said in July that he was hopeful "the president will keep making them, and if he doesn't then I guess we'll have to figure out from a congressional standpoint what we do."

Thomson ReutersOn the state level, Republican Gov. Brian Sandoval of Nevada said ending the CSR payments would hurt people in his state and that he is looking at options to preserve the payments. Sandoval was a critic of multiple GOP Obamacare repeal efforts this year.

"The governor believes that the Trump Administration is making the wrong decision to eliminate cost sharing reductions for all fifty states, as it will destabilize insurance markets and jeopardize coverage for thousands of Massachusetts residents relying on CSRs for affordable health care coverage," a spokesperson said in a statement Friday.

Democrats are all but guaranteed to support a standalone measure that would appropriate funding for CSRs, but complications could arise if the appropriation is part of larger package.

NOW WATCH: The Supreme Court will hear a landmark case on gerrymandering — here’s how the political tactic changed the US forever

SEE ALSO: How Trump's decision to end key payments throws a wrench into the heart of Obamacare