Something might be keeping the ozone layer from healing itself 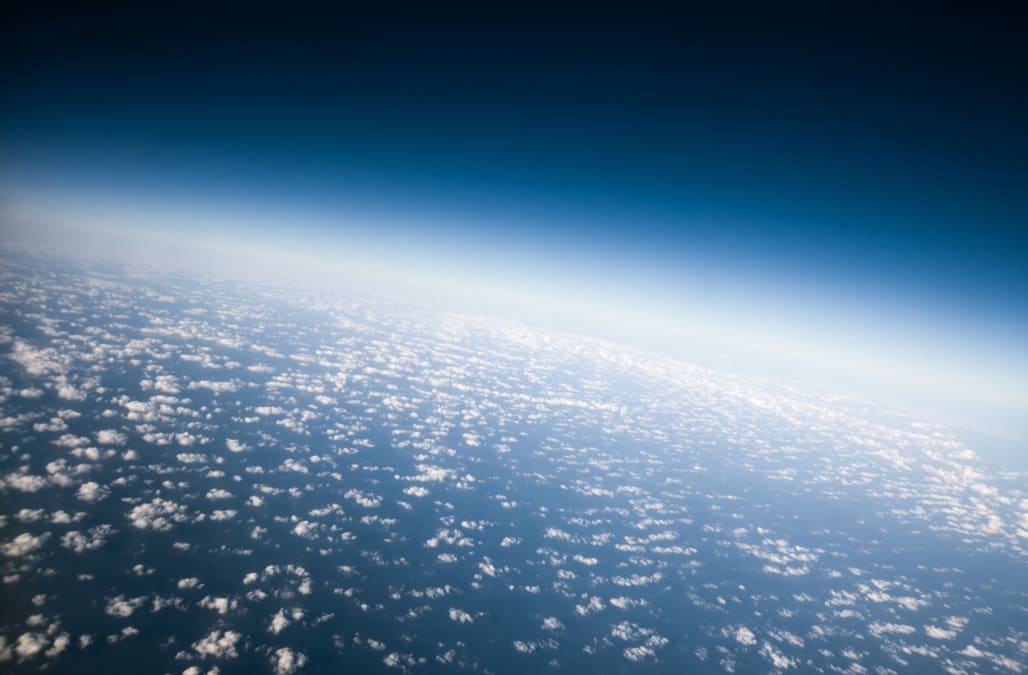 After 30 years, the Earth's ozone layer seems to have stabilized. But it's not showing any signs of recovering from the damage chemicals did to it.

In the 1980s, scientists discovered certain chemicals had chewed a "hole" in Earth's ozone layer, which protects us from the sun's ultraviolet radiation. Several nations enacted the Montreal Protocol, which was designed to phase out damaging chemicals like chlorofluorocarbons and hydrofluorocarbons. Since then, satellites monitoring the ozone hole haven't seen any improvement.

It could be because of atmospheric conditions. A 2013 NASA study found that heat and wind in Earth's stratosphere change the average size of the ozone hole from year to year. In 2016, for example, NASA scientists determined the fluctuations were due to an unusually warm stratosphere.

RELATED: 8 beautiful places that have revealed the Earth's secrets

8 beautiful places that have revealed the Earth's secrets

Eye of the Sahara

It looks like a bulls-eye, but it's actually the result of an incredible geological story. The Eye of the Sahara, formally known as the Richat structure, is 25 miles across. The huge size means it's difficult to spot on the ground — it only began to attract attention when astronauts began spotting it from space.

Geologists are still working on understanding how it came to be, but the current theory is that about 100 million years ago, molten rock pushed towards the surface without pushing through. That created a large dome of layers of rock types, which eroded at different speeds to create the uneven but almost perfectly circular terrain.

It doesn't look like much, but there's a reason for that. Surtsey Island, off the coast of Iceland, is a relatively new place on Earth. In fact, it's barely 50 years old. It was created between November 1963 and June 1967 by an erupting volcano. The combination of ash and lava meant that while the island is eroding and will someday disappear, it's lasted much longer than some temporary islands formed by eruptions.

Since it began to be formed, it's been watched carefully by scientists who wanted to see how long it took for plants and animals to begin colonizing the new land. It took less than a decade for the first birds to nest on the island. To make sure nothing skews their results, the island has been off-limits to tourists since 1965.

If it looks like someone scratched across northern New York with their fingernails, that's because that's pretty much what happened, except the fingernails were gigantic and belonged to glaciers.

Up until about 10,000 years ago, most of New York was actually covered by ice, which could get as thick as two miles tall. But that ice didn't just come and leave — it moved back and forth as temperatures rose and fell.

Glaciers moving like this carve deep, round-bottomed gashes in the rock as they wear away at paths that have been started by streams and other forces. After the planet warmed up enough to send ice sheets north for good, 11 of these gashes eventually filled with water, becoming the Finger Lakes.

The Tibetan Plateau is a huge swath — about half the area of the lower 48 states — where rock has been pushed up by colliding continents.

About 50 million years ago, the hunk of land we now call India first ran into the Asian tectonic plate. But merely having a continent in the way isn't enough to stop a subcontinent on the move. India kept jamming into Asia, raising and crumpling the land at the seam between the two plates.

Geologists are still working out precisely what happened between then and now. But the result is a plateau three miles high that's home to the two tallest mountains on the planet.

What this geology tourist is pointing to is a layer of Earth that has an unusually high amount of the element iridium in it — about 30 times higher than usual. It dates back about 65.5 million years. Luis and Walter Alvarez, a father-son science team, stumbled on it outside a small town in Italy in the late '70s, although you can see traces of it around the world.

They used it as the basis for one of the most well-known theories in science: that the dinosaurs — and about three quarters of life — were wiped out by a huge asteroid crashing into Earth. That idea was hotly contested for decades, but is now generally accepted. The layer itself is called the K-T boundary because it marks the division between the Cretaceous and Tertiary periods of prehistory.

It's one thing to know there were dinosaurs and another entirely to see their footprints 100 million years later. But that's exactly what you can do along Dinosaur Freeway, a swath of Colorado that at the time was partially underwater. And it's not just cool to see — studying tracks can also give scientists a sense of what types of dinosaurs were moving through the site and how old they were.

There are older bones and more recent tracks near the site as well. But the 100-million-year-old tracks may not last another 100 million years. That's because they've been slowly eroding since they were uncovered.

You can't see a living tree that's more than 200 million years old. But you can see trees that were living more than 200 million years ago — because they've fossilized, turning into petrified wood. One of the largest concentrations is at Petrified Forest National Park in Arizona. At the time the trees were growing, the area was a large river basin shrouded by forests.

Trees died, rolled into the river, and floated downstream until they were buried by soil and other debris in literal log jams. The bark fell off quickly, since it's only stuck to the wood by a thin membrane. Then, over the course of centuries, huge trunks were fossilized.

About 60 million years ago, the land in the area began moving and rising. That fractured the petrified wood, since the giant silica blocks they'd become are very hard but also brittle.

Over the past few million years, the Colorado River has carved an incredible time machine into Arizona's rocks. In parts of the Grand Canyon, you can climb down through almost two billion years' worth of rock. Even the newest rock levels in the Canyon were laid down while dinosaurs still roamed the Earth.

But although the Grand Canyon draws a steady stream of geologists, scientists still have a lot of questions about how the incredible place came to be. Some think it was carved all in one go, some think a few separate canyons have been merged together. Others are still working on pinning dates to some rock layers. And all want to figure out how exactly the river came to this particular path.

(tobiasjo via Getty Images)
Up Next

SEE MORE: Most Of The World's Carbon Emissions Come From Just 100 Companies

And now, some researchers argue the ozone layer is facing a new threat from harmful substances that aren't regulated by the Montreal Protocol. They're used in everything from pharmaceuticals to paint stripper, and we'd previously thought they degraded before they reached the stratosphere.

But a recent study found there's more of them in the atmosphere than expected. Levels of dichloromethane, for example, have increased 60 percent over the past decade.

Researchers say we might need to expand the Montreal Protocol to include these harmful substances. Until then, scientists will continue to monitor the ozone hole's fluctuations.

More from Newsy:
How Cities Will Stay Dry In A Rain-Soaked Future
Revolt: When It Rains
California Wildfires Are Causing Problems Well Beyond The Fires' Edge