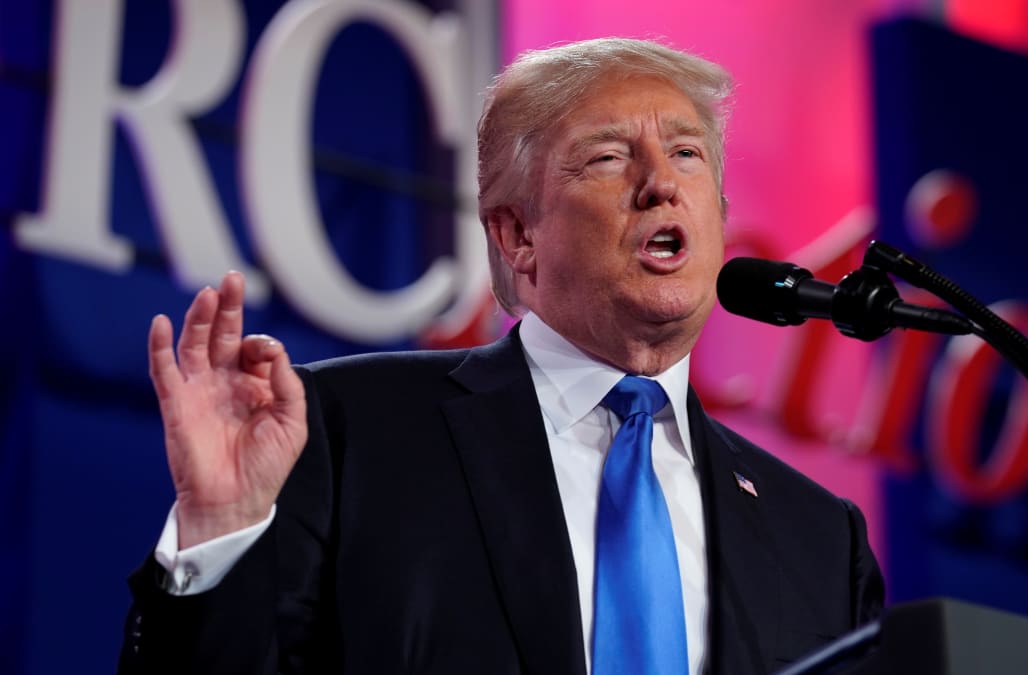 President Trump said during a speech Friday that he’d recently met with the President of the U.S. Virgin Islands — who turns out to be him.

Trump, discussing his tour of hurricane-slammed parts of the U.S. at the Values Voter Summit, said “I met with the President of the Virgin Islands.”

“These are people that are incredible people,” he said at the Washington, D.C. rally.

While the U.S. territory’s legislature does have a President, the commander-in-chief was likely referring to Virgin Islands Gov. Kenneth Mapp, with whom Trump met earlier this month.

Twitter reacts to anti-LGBT books distributed at summit Trump spoke at
US President Donald Trump speaks during the Family Research Council's 2017 Value Voters Summit on October 13, 2017 in Washington, DC. / AFP PHOTO / Brendan Smialowski (Photo credit should read BRENDAN SMIALOWSKI/AFP/Getty Images)
Value voters must know there is no attack on Judo Christian values and Merry Christmas this is just a dog whistle from Trump
Trump to speak at Value Voters LGBT hate fest. How do you feel about that @ChrisRBarron ? Still cheerleading for him?
Why are "value voters" clapping for President Trump's gutting the ACA? What values do these people have?
@SenSchumer @POTUS Nothing more comforting than listening to Tony Perkins & his "value voters" applaud trump taking… https://t.co/LBpfMlUHQb
Ten years ago "Trump speaks at Value Voters Summit" would have been a punchline. Yet here we are. SAD! #VVS17 https://t.co/lXx1HJuuV5
@rudepundit Trump "value voters?" The effing moron speaking to the oxymorons.
Trump addresses the Value Voters Summit. https://t.co/THydNrijI5
@TheWrightWingv2 How should trump be held accountable for his 13 sexual assaults? How do we move forward as value v… https://t.co/llx0pp3lEA
FIFY: Trump becomes first prez to address that Value Voters summit. Why ppl hate the media ex 435 Gazillion! https://t.co/N8xcRGlYr9
@cspan How can you speak before Value Voters summit today & last night cut $ for poor Americans who need #heathcare… https://t.co/BhxWBbBxdY
@ericbolling @realDonaldTrump I didn't know Value Voters valued sexual harassment the way you and Trump do. when wi… https://t.co/f16fA7zQcg
President Trump's speech at the Value Voters Summit was pretty remarkable. I think he really hit everything on the nail.
somehow fitting that #AltCrusade17 is the same day as the Value Voters Summit in DC feat Phares, Gaffney, Gorka, Boykin, Trump...
3X married serial adulterer & accused serial sexual assaulter Trump rallying enraptured minions at Value Voters Summit = 100% pure hypocrisy
Shouldn’t everyone at this Value Voters Summit be wearing a white hood & robe? — Scott Dworkin (funder) October 13, 2017
Up Next

The White House’s official transcript later corrected the line to indicate Trump was referring to Mapp.

But it came just a day after Energy Secretary Rick Perry referred to Puerto Rico as its own country.

“That is a country that already had its challenges before this storm,” Perry said during a congressional testimony about restoring power to the island.

That upset Rep. Kathy Castor (D-Fla.), who quickly noted: “It’s America. They’re American citizens, so it's not a country.”

Perry clarified that he understood, and had just moments earlier referred to Puerto Rico as a territory.

The White House has been under fire for its response to Puerto Rico, where more than 80% of the island remains without power.

More from AOL.com:
Virgin Islands seek donations to aid island residents hit by Mari
Trump tells Puerto Rico residents he ‘will always be with them’
Hurricane Nate poised to hit New Orleans as a Category 2 storm