No. 1 pick Myles Garrett got a sack on the first play of his NFL career 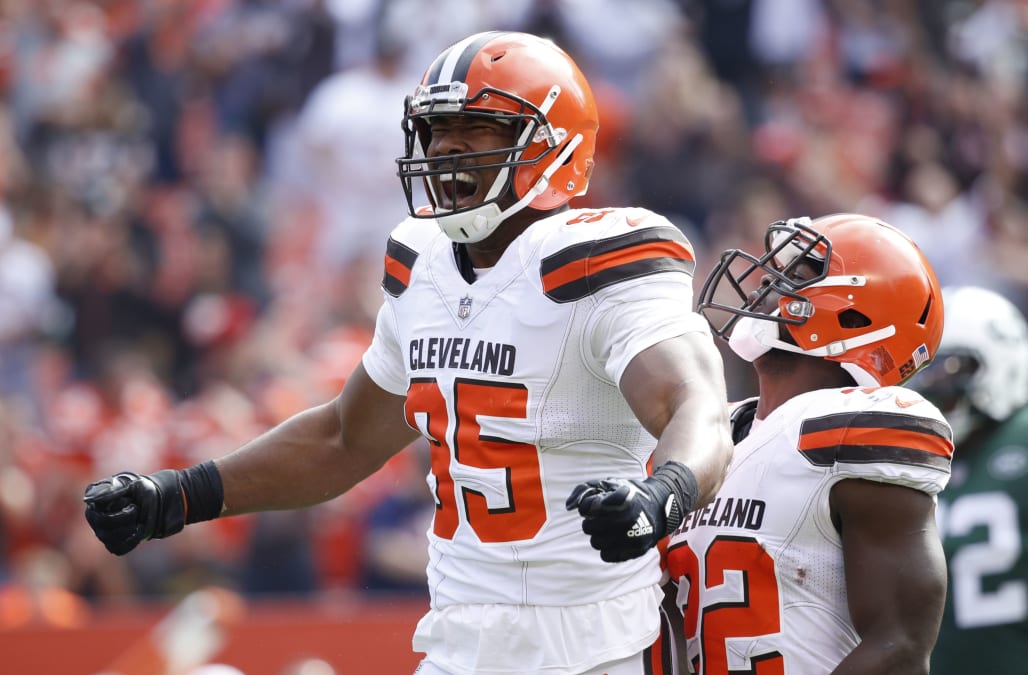 Myles Garrett made his NFL debut on Sunday against the New York Jets, and he appeared to be worth the wait for the Cleveland Browns.

Garrett missed the first four weeks of the season with an ankle injury he sustained in training camp.

The best photos from NFL Week 5
PITTSBURGH, PA - OCTOBER 08: Leonard Fournette #27 of the Jacksonville Jaguars dives into the end zone for a 2 yard touchdown in the second quarter during the game against the Pittsburgh Steelers at Heinz Field on October 8, 2017 in Pittsburgh, Pennsylvania. (Photo by Justin K. Aller/Getty Images)
HOUSTON, TX - OCTOBER 08: Will Fuller #15 of the Houston Texans makes a reception for a touchdown as he slips behind Terrance Mitchell of the Kansas City Chiefs in the fourth quarter at NRG Stadium on October 8, 2017 in Houston, Texas. (Photo by Bob Levey/Getty Images)
EAST RUTHERFORD, NJ - OCTOBER 08: Hunter Henry #86 of the Los Angeles Chargers catches a third quarter touchdown pass against Landon Collins #21, Keenan Robinson #57 and Darian Thompson #27 of the New York Giants during an NFL game at MetLife Stadium on October 8, 2017 in East Rutherford, New Jersey. The Los Angeles Chargers defeated the New York Giants 27-22. (Photo by Steven Ryan/Getty Images)
Oct 8, 2017; Los Angeles, CA, USA; Seattle Seahawks tight end Jimmy Graham (88) is defended by Los Angeles Rams defensive back John Johnson (43) on a 4-yard touchdown reception in the second quarter during a NFL football game at Los Angeles Memorial Coliseum. Mandatory Credit: Kirby Lee-USA TODAY Sports TPX IMAGES OF THE DAY
Oct 8, 2017; Houston, TX, USA; Kansas City Chiefs tight end Travis Kelce (87) jumps over Houston Texans free safety Andre Hal (29) during the first quarter at NRG Stadium. Mandatory Credit: Shanna Lockwood-USA TODAY Sports TPX IMAGES OF THE DAY
October 8, 2017; Los Angeles, CA, USA; Los Angeles Rams running back Malcolm Brown (34) leaps over Seattle Seahawks cornerback Richard Sherman (25) and free safety Earl Thomas (29) during the second half at the Los Angeles Memorial Coliseum. Mandatory Credit: Gary A. Vasquez-USA TODAY Sports TPX IMAGES OF THE DAY
Oct 5, 2017; Tampa, FL, USA; Tampa Bay Buccaneers running back Doug Martin (22) leaps over the pile for a touchdown during the second quarter of an football game against the New England Patriots at Raymond James Stadium. Mandatory Credit: Reinhold Matay-USA TODAY Sports TPX IMAGES OF THE DAY
ARLINGTON, TX - OCTOBER 08: (EDITORS NOTE: Image has been converted to black and white.) Aaron Rodgers #12 of the Green Bay Packers looks for an open receiver in the third quarter against the Dallas Cowboys at AT&T Stadium on October 8, 2017 in Arlington, Texas. (Photo by Tom Pennington/Getty Images)
CINCINNATI, OH - OCTOBER 8: Adam Jones #24 of the Cincinnati Bengals jumps through the smoke while being introduced to the crowd prior to the start of the game against the Buffalo Bills at Paul Brown Stadium on October 8, 2017 in Cincinnati, Ohio. (Photo by John Grieshop/Getty Images)
Up Next