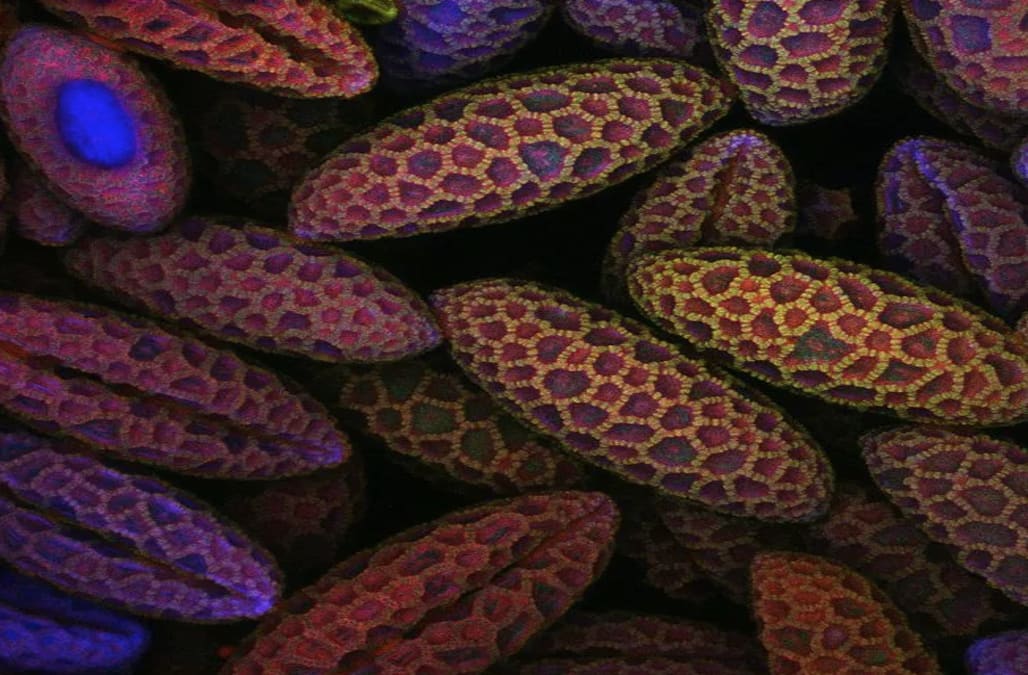 For the last 43 years, Nikon has recognized the world's best views of the small, the tiny, the minuscule and the microscopic. While big things have their fans—everyone loves elephants, mountains and whales—weevils and lily pollen can be just as imposing when you take a closer look. On October 4, 2017, the winners were announced on Instagram.

These images won the top 10 spots, carefully selected from more than 2,000 entries from 88 countries around the world:

Laden with an unusual amount of keratin, parts of this skin cell fluoresce in this stunning photograph. Strange amounts of keratin in skin could indicate some kinds of skin cancers. This cell comes from a line of immortal skin cells — HaCaT — with an unusual number of chromosomes, similar to the famous HeLa lineage. The scientists hope that investigating these strange cells will shed light on how cancer and other diseases progress.

You probably see this view every day—a flower in the daisy family that's on it's last stem. Sarfaty was able to train his hand and eye to remain remarkably steady over many years at his veterinary ophthalmology clinic—a skill that he now puts to use, taking images from his garden.

That's not Pacman or Space Invaders. That's a live Volvox algae releasing its daughter colonies. This species of algae was part of a 2009 study that showed how once unicellular organisms could have made the leap to multicellularity about 200 million years ago.

The front end of the tapeworm has suckers and hooks for attaching to the lining of the host's small intestine. The head is inverted back inside the tapeworm's body until it reaches the human gut—eversion is stimulated by mammal bile and digestive juices. Halloween costume idea, anyone?

FIFTH PLACE: MOLD ON A TOMATO

Scientists never know where studying mold will take them. Alexander Fleming discovered the first antibiotic after a mold invaded his Petri dishes. But it can also have less beneficial outcomes. More recently, scientists found that 27 molds from a decaying tomato were toxic to brine shrimp larvae. Be careful with that seafood stew.

Pollen gilds a lily from the United Kingdom. In some parts of the world, lily bulbs are eaten as a vegetable, while in others, the lily flower is enjoyed as decoration.

This photo shows nerves that are developing behind the eye of an embryonic chick. During this point in development, the neurons are feeling out where they need to be to control the bird's vision. Egawa studies what enzymes regulate this process.

This spiral-shaped cavity holds small organs that turn sound vibrations into nerve signals, which allows rats (and other animals—including humans) the ability to hear.

Moura studies skeletal stem cells, which could potentially help people who need their skeletons repaired. This research especially benefits elderly patients, who have higher rates of osteoporosis and accompanying fractures.

A notorious agricultural pest, the cotton boll weevil alone has cost the United States more than $23 billion, though eradication programs have helped diminish losses in recent years. Studying how these bugs reproduce is crucial to figuring out how to stop them.

More from Popular Science:
Puppies are the culprits behind a 12-state diarrhea disaster
Scientists are trying to figure out how to keep bacteria from running rampant on space missions
When a hurricane finally passes, it spreads deadly disease in its wake