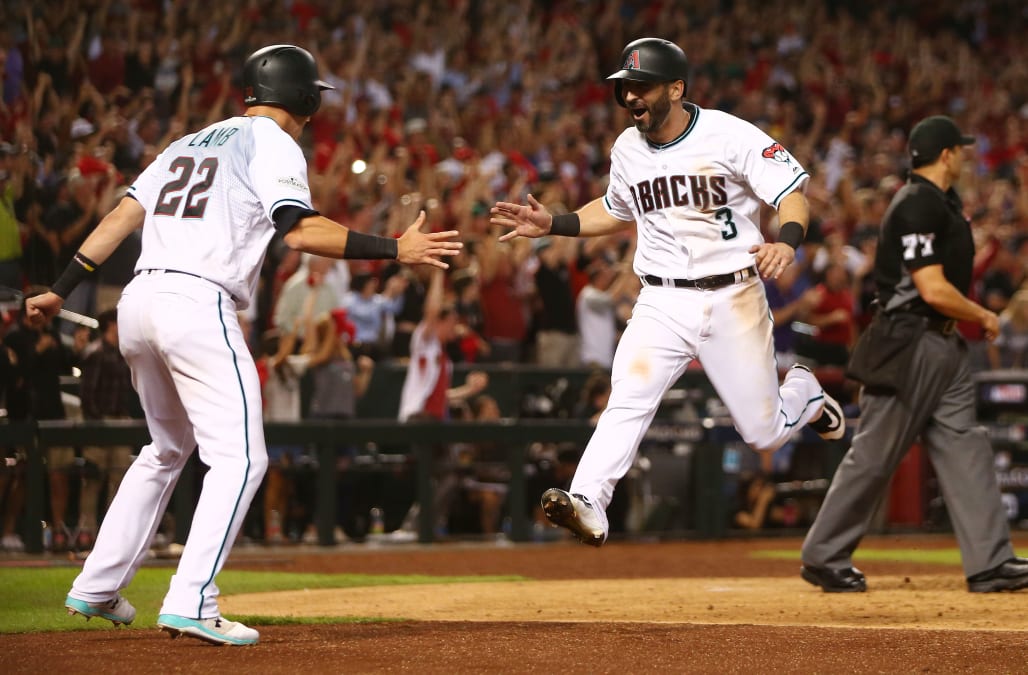 The Arizona Diamondbacks are heading to the National League Division Series.

The Diamondbacks held on to beat the Colorado Rockies 11-8 in a heart-stopping matchup in Phoenix on Wednesday night to win the National League Wild Card game. Former Cy Young Award winner Zack Grienke started for the Diamondbacks against Colorado's Jon Gray, but both pitchers combined for only five innings pitched in a crazy contest that saw Arizona jump out to a six-run lead early on before the Rockies closed the deficit to one on two occasions in the late innings.

A career .098 hitter coming into the game, Arizona reliever Archie Bradley laced his first career extra-base hit, a two-run triple, into the left-center gap off Rockies All-Star Pat Neshek to give the D-backs an 8-5 lead in the seventh inning.

But Bradley went out to the mound in the eighth and gave up back-to-back solo home runs to Nolan Arenado and Trevor Story. He later allowed a two-out double to Pat Valaika to put the tying run at second base before settling down and inducing a flyout from Jonathan Lucroy, who'd reach base in his previous three plate appearances, to end the threat.

The Snakes then added three insurance runs in the bottom of the frame before Colorado eked out one in the ninth against Fernando Rodney, who closed it down to ensure the Diamondbacks advanced to the National League Division Series for the first time since 2011.

The fate of each MLB Wild Card team since 1995

Luke Gregerson #44 of the Houston Astros celebrates defeating the New York Yankees in the American League Wild Card Game at Yankee Stadium on October 6, 2015 in New York City. The Astros defeated the Yankees with a score of 3 to 0. (Photo by Al Bello/Getty Images)

The Kansas City Royals celebrate their 2 to 1 win over the Baltimore Orioles to sweep the series in Game Four of the American League Championship Series at Kauffman Stadium on October 15, 2014 in Kansas City, Missouri. (Photo by Dilip Vishwanat/Getty Images)

ST LOUIS, MO - OCTOBER 27: Infielder Brandon Inge #15 of the Detroit Tigers looks back for the baseball after an errant throw from Justin Verlander during the fourth inning of Game Five of the 2006 World Series on October 27, 2006 at Busch Stadium in St. Louis, Missouri. (Photo by Brad Mangin/MLB Photos via Getty Images)

HOUSTON - OCTOBER 25: Scott Podsednik of the Chicago White Sox steals second base as Craig Biggio of the Houston Astros applies a late tag during the eleventh inning of Game Three of the Major League Baseball World Series at Minute Maid Park on October 25, 2005 in Houston, Texas. (Photo by John Grieshop/MLB Photos via Getty Images)

HOUSTON - OCTOBER 18: Carlos Beltran #15 of the Houston Astros shows that his has the ball in his glove after a diving catch in game five of National League Championship Series against the St. Louis Cardinals during the 2004 Major League Baseball Playoffs on October 18, 2004 at Minute Maid Park in Houston, Texas. The Astros defeated the Cardinals 3-0 to take a 3-2 game lead. (Photo By Jamie Squire/Getty Images)

FLUSHING, NY - OCTOBER 24: Mike Piazza of the New York Mets stands on second base during Game Three of the World Series against the New York Yankees on October 24, 2000 at Shea Stadium in Flushing, New York. (Photo by Sporting News via Getty Images)

4 Oct 1997: Infielders Charlie Hayes and Tino Martinez of the New York Yankees celebrate during a game against the Cleveland Indians at Jacobs Field in Cleveland, Ohio. The Yankees won the game, 6-1. Mandatory Credit: Matthew Stockman /Allsport

Arizona had opened up a six-run lead by the third inning by battering Gray, who didn't get out of the second inning against Arizona's vaunted lineup. The D-backs plated three runs against Gray before the 25-year-old recorded an out, thanks to a monstrous three-run homer from Arizona first baseman Paul Goldschmidt.

That would normally be more than enough to work with for Greinke, but Arizona's ace completely fell apart in the fourth. The Rockies drove in runs on four consecutive at-bats, with pinch-hitter Alexi Amarista's line-drive single up the middle making it 6-4 to signal the end for Greinke. It was the shortest postseason start of his career.

However, the Snakes clung to the lead behind No. 2 starter Robbie Ray, who made his first relief appearance since 2014 and hurled 2.1 innings of one-run ball. The final innings certainly weren't without their drama, but Arizona led throughout it all to survive.

Major League Baseball expanded to two Wild Card teams in each league in 2012, prompting the creation of the one-game Wild Card playoff for the right to play in the Division Series. Arizona will now move on to face the Los Angeles Dodgers in the NLDS.