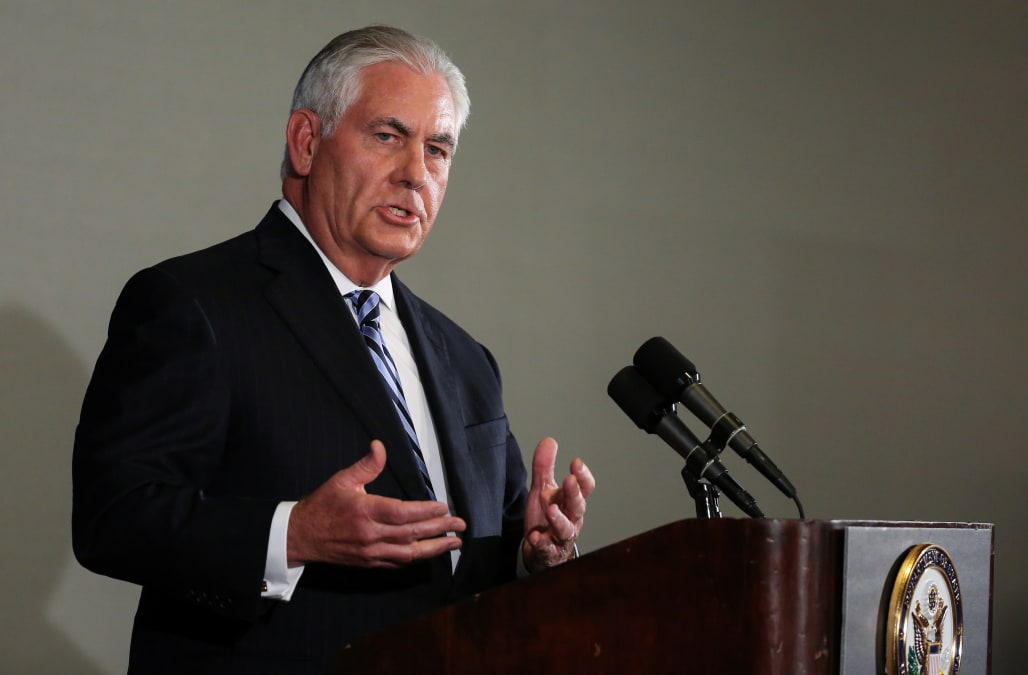 WASHINGTON, Oct 4 (Reuters) - U.S. Secretary of State Rex Tillerson said on Wednesday he had never considered resigning and that he was committed to Donald Trump's agenda but declined to directly address whether he had referred to the president as a "moron" as NBC News has reported.

The top U.S. diplomat, whose tenure has been dogged with rumors about unhappiness with Trump's policies and rhetoric, said he was committed to Trump's agenda as much today as he was when he first accepted the offer to serve as secretary of state.

SEE ALSO: Report: Tillerson described Trump as a 'moron,' was on the verge of resignation

Tillerson spoke after NBC reported that Vice President Mike Pence and other top officials had intervened to persuade him not to resign during the summer as tensions rose between Trump and Tillerson.

"The vice president has never had to persuade me to remain as secretary of state because I have never considered leaving this post," Tillerson said in a hastily prepared news conference at the State Department. "I am here for as long as the president feels I can be useful to achieving his objectives."

"My commitment to the success of our president and our country is as strong as it was the day I accepted his offer to serve as secretary of state," Tillerson said.

In a session with Trump’s national security team and Cabinet officials at the Pentagon, Tillerson openly criticized the president and referred to him as a "moron," NBC reported, citing three officials familiar with the incident.

Tillerson, who said he had not spoken to Trump on Wednesday, sidestepped the issue when taking questions after his statement:

"I'm not going to deal with petty stuff like that," he said .".. This is what I don't understand about Washington ... I'm not from this place, but the places I come from we don't deal with that kind of petty nonsense. And it is intended to do nothing but divide people, and I'm just not going to be part of this effort to divide this administration."

Trump appeared to undercut Tillerson over the weekend when the president tweeted that he told him that he was "wasting his time" trying to negotiate with North Korean leader Kim Jong Un over Pyongyang's nuclear and missile programs.

Tillerson offered a vigorous defense of both the U.S. president and his foreign policy even though the White House and State Department have at times appeared to differ on policy.

In a tweet, Trump called on NBC to apologize for its story, saying both Tillerson and Pence had refuted it. Pence, in a statement, said he never discussed with Tillerson the prospect of the secretary of state's resignation.

Defense Secretary Jim Mattis has played down any tensions between Trump and Tillerson over their apparent split, most recently over North Korea.

Tillerson's insistence that he completely supports Trump's agenda runs counter to what some administration officials have privately described as him chafing against some of the president's pronouncements and off-the-cuff decisions, sometimes contrary to advice from senior advisers.

“... this was a stunning and unprecedented statement by a secretary of state in response to a news report about his comments about the president,” said Aaron David Miller, a former Middle East negotiator for both Republican and Democratic administrations and now an analyst at the Wilson Center think tank in Washington.

One U.S. official said the view of many within the administration was that despite Tillerson’s denial of having contemplated resignation, “it’s only a matter of time” before he does consider it.

The official, speaking on condition of anonymity, said there was no reason to believe that Trump would give up his habit of publicly contradicting Tillerson and that each time speculation on his future would resurface.

Tillerson has often found himself at odds with the president on a range of issues, according to current and former U.S. officials and media reports.

He has taken a more hawkish view on Russia and tried to mediate a dispute among key U.S. Mideast allies after four Arab nations boycotted Qatar over its alleged extremist ties.

Trump undercut Tillerson's mediation effort, calling Qatar "a funder of terrorism at a very high level." Trump has since adopted a stance closer to the State Department's on this issue.

More from AOL.com:
State Department: Pyongyang shown no interest in talks
US will admit up to 45,000 refugees next year: Trump
Ivanka Trump and Jared Kushner are shrinking their White House roles as they come under increasing fire