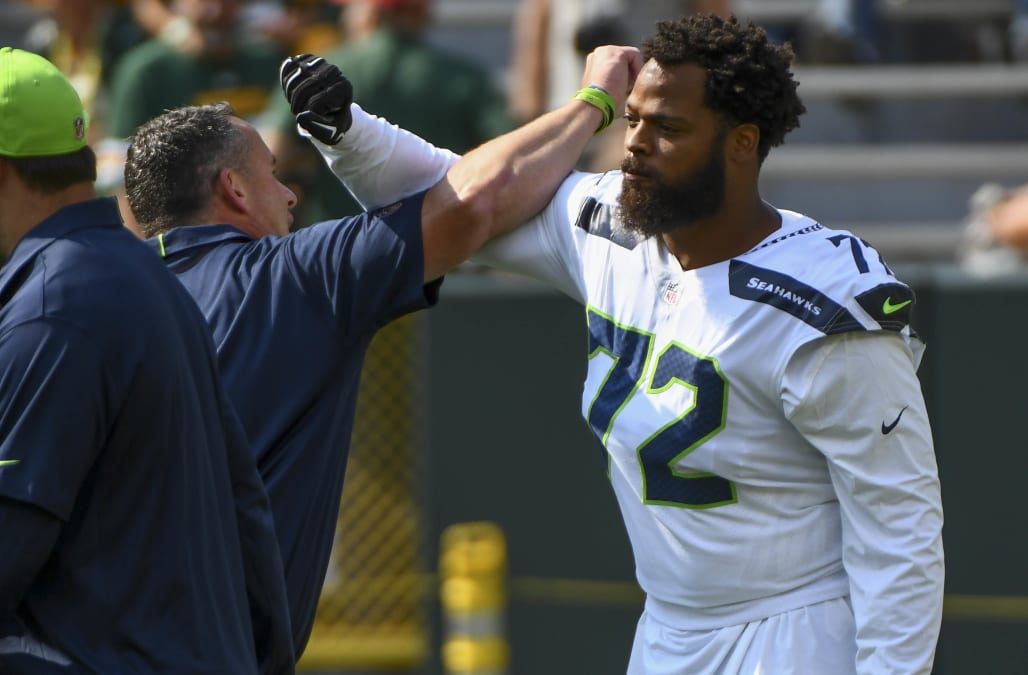 RENTON, Wash. (KCPQ)— A scene spotted near the Seahawks training facility might be doing the unthinkable:

Bringing together people on both sides of the protests during the national anthem.

She thought it was a car wreck. Instead, it was military veterans standing on the road. They appeared to be protesting the Seahawks decision to protest before the national anthem.

“Mostly all seniors who had probably seen the battlefield firsthand,” Coats wrote. “They were proudly wearing their veteran’s hats, jackets and some carried American flags.”

Standing with the veterans was Seahawks defensive end, Michael Bennett.

Bennett has been at the center of the debate over the protests, as many have criticized him for sitting during the national anthem.

RELATED: How NFL players and teams around the league react to Trump's comments

Sunday's first game got started early in London. Some players on the Baltimore Ravens stood arm-in-arm during the anthem, while many others including  Mike Wallace, Tony Jefferson, Terrell Suggs, and former Ravens linebacker Ray Lewis chose to kneel.

On the Jacksonville sideline, it was a similar scene, with some players standing arm-in-arm and others choosing to take a knee. Eli Ankou, Tashaun Gipson, A.J. Bouye, and ten other Jaguars all knelt for the anthem. Also notable was the presence of Jaguars owner Shahid Khan.

In Minnesota, the Vikings chose to all stand together linking arms in a show of team unity. Members of the ownership and management were also present on the sideline.

Citing team unity, no players on the Houston Texans knelt on Sunday, with all players choosing to stand for the anthem linking arms.

Eagles owner Jeffery Lurie was on Philadelphia's sideline, where players stood together with locked arms and some raised fists. Safety Malcolm Jenkins asked the crowd to join the team in linking arms in a tweet sent out before the game.

The Broncos also had a large group of players demonstrate, with close to half the team taking a knee during the anthem.

A number of Bills players knelt for the anthem, while running back LeSean McCoy continued his pre-game stretches throughout the playing of the song. McCoy was one of many athletes to call out the president over Twitter earlier in the week.

Pittsburgh Steelers head coach Mike Tomlin announced before their game that the team would not participate in the national anthem "Not to be disrespectful to the anthem, to remove ourselves from this circumstance," adding that players shouldn't have to choose sides. Offensive tackle Alejandro Villanueva, an army ranger who served three tours of duty in Afghanistan before beginning his NFL career, chose to come out and participate, making him the lone Steeler on the field.

Two Falcons players — Grady Jarrett and Donatri Poe — chose to kneel for the anthem, while team owner Arthur Black stood with players on the sideline.

A number of Colts players including Al Woods, Malik Hooker, Kamar Aiken and Rashaan Melvin all took a knee for the anthem in Indianapolis.

On the Browns sideline, 21 players reportedly knelt during pregame. Earlier in the season, the Browns had come out of the tunnel with local firefighters, police, and military members as a show of unity.

Acting owner Christopher Johnson and general manager Mike Maccagnan stood alongside all Jets players during the anthem in New York.

The Seahawks and Titans both stayed in their locker rooms as the anthem played ahead of their game in Tennessee on Sunday, making for a somewhat surreal scene. Singer Meghan Linsey took a knee after finishing the anthem.

The Bengals chose to stand arm-in-arm as well, and released a statement after the anthem was completed. "Football and politics don't mix easily," the statement read. "Fans come to NFL games to watch great competition on the playing field and that's where our focus should be."

The Green Bay Packers also chose to mostly stand with arms linked for their game Sunday. Quarterback Aaron Rodgers also shared a post on Instagram that many are viewing as a show of support for players who knelt.

The Los Angeles Chargers had a mix of players standing together, raised fists, and five players — Chris McCain, Darius Philon, Brandon Mebane, Damion Square and Tenny Palepoi — choosing to sit for the anthem. Melvin Ingram knelt as the song played.

On the Kansas City Chiefs sideline, Chris Conley kneeled through the anthem, and cornerback Marcus Peters sat the song out as he has for every game so far this season.

Playing against the Redskins in Washington D.C. on national television, the Raiders came out with one of the strongest demonstrations of the day, with the majority of their team electing to sit out the anthem. As sideline reporter Michele Tafoya noted, head coach Jack Del Rio said the team would've preferred to remain in the locker room, but would have faced a 15-yard penalty due to different rules in place for primetime games.

Across the field from the Raiders, the Redskins mostly stood through the anthem, with owner Dan Snyder joining the team for the moment.

Coats said she grabbed a picture of Bennett. Then, the gravity of the scene hit her.

She started to cry.

"Suddenly, that image brought an unexpected wave of extreme emotion over me and I instantly and almost uncontrollably started bawling," she said.

Coats had to pull over. She said a few veterans came over and asked if she was OK. So too did Bennett.

Coats told Bennett how she felt about the protests during the national anthem.

She and Bennett spoke for nearly a half hour. She said he spoke kindly, and listened to her concerns.

"He talked about a lot of things I knew were coming from his heart, too," Coats said. "The word unity was used several times, and he admitted he didn't know where to go from here."

Coats said she didn't know where to go from here. Neither does Bennett, she said.

And maybe that's OK, she suggests.

"Nor do I know what the correct answers are... but I do know, I am thankful for those veterans and thankful Michael stopped to talk with them... and inadvertently me," Coats said.

Though many internet comments about the protests have been toxic, some in Coats' post seems to see the perspective on both sides.

"Thank you for sharing your story," one commenter said. "There's always two sides to every story and you demonstrated that beautifully."