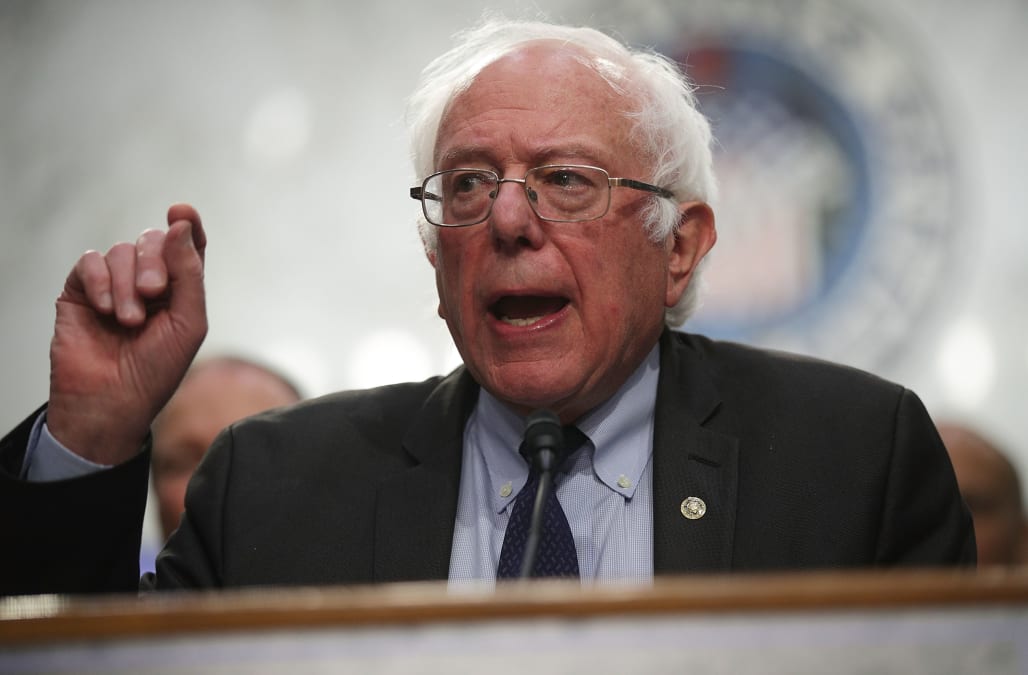 Democrats on Wednesday slammed President Donald Trump's tax reform plan, calling it "morally repugnant," suggesting there would be little to no cross aisle support for the initial outline of the plan.

Democratic leaders immediately condemned the bill, casting it as a proposed tax break that would largely benefit the wealthy by lowering the top income tax bracket from 39.5% to 35% and lowering the pass-through tax rate, something largely used by wealthy earners.

Senate Minority Leader Chuck Schumer decried the proposal in a speech on the Senate floor, saying Republicans "designed their tax plan to be cheered in country clubs and corporate board rooms."

Schumer said the plan had seemed like it was masterminded by former Goldman Sachs employees in the administration, such as US Treasury Secretary Steve Mnuchin and National Economic Council Director Gary Cohn.

"Has the President read his plan? Has he been involved in creating his plan? Or is it the people around him, many of them from Wall Street who came up with this plan, and the president doesn’t even know what it does?" Schumer said.

Sen. Bernie Sanders argued that the plan would exacerbate income inequality, singling out its proposal to repeal the estate tax, noting that the top 10% of earners pay 90% of estate taxes.

"At a time of massive wealth and income inequality, Trump's tax plan is morally repugnant and bad economic policy," Sanders said in a statement.

Alaskan whaling captains can avoid tax on up to $10,000 of whaling-related expenses per year. Costs they can deduct include purchasing and maintaining the boat, weapons and gear, food and supplies for the crew, and storing and distributing the catch.

Oddly, whaling captains report these costs as a charitable deduction on their tax returns. Unless someone is authorized by the Alaska Eskimo Whaling Commission, however, whaling is illegal in the United States.

When a business pays for capital improvements — like building a new office or buying a new machine — it typically deducts those costs over the life of the asset, which could translate into decades. A special exception exists in the tax code for “certain motorsports entertainment complex property placed into service before Jan. 1, 2017,” which refers to NASCAR tracks and other racing facilities. The exception allows businesses to deduct the costs over seven years, which is much faster than usual.

If you take care of an “exceptional tree” in Hawaii, you can deduct up to $3,000 on your state taxes of what it costs you. A local county arborist advisory committee must declare it an exceptional tree and you’ll need an affidavit from the arborist stating the tree’s type and location and what you paid to maintain it. You can take this deduction only once every three years.

If you live in Florida and want to pay lower property taxes — perhaps on your second home that has a lot of open land — consider renting some cows. Under greenbelt laws, if you use your land for agricultural purposes, your real estate taxes are based on the agricultural value of the land, not its market value.

This deduction doesn’t explicitly state how many cows you have to raise or even that you have to own them. Developers often let a few dozen rented cows roam their land — sometimes even during construction — to lower their property tax bills.

If you live to be 100 years old, moving to New Mexico will cut your tax bill because you will pay no tax to the state. A caveat: You cannot take the deduction if you claim someone as a dependent. Paying no state income tax might not be a huge break, but if it’s available, take it.

If you’re searching for a tax loophole you can use — one that doesn’t benefit only the 1 percent — the IRS allows qualified performing artists to deduct certain expenses. To qualify, you must have performed for at least two different employers during the year and received at least $200 from each, had business expenses that exceeded 10 percent of your performing arts income and claimed less than $16,000 in adjusted gross income for the year. If you’re married, that $16,000 limit applies to both your spouse’s and your incomes.

Install a pool for medical treatments and you could be in for a big tax break. One taxpayer suffering from emphysema and bronchitis was prescribed swimming by his doctor as part of his treatment, so he built a pool and wrote off a portion of the costs as a medical expense. He could deduct only the amount by which the installation cost exceeded the home’s increase in value, but he did get to include upkeep costs.

See: 19 Medical Expenses You Can Deduct From Your taxes

Deducting body oil on your taxes might sound downright crazy, but you might be able to. One professional bodybuilder needed to shine a little brighter during competition so he applied body oil. When tax season rolled around, he included the cost as a business expense. At first, the IRS disallowed the deduction, but the Tax Court approved because using the oil made him more competitive.

Meat packers, butchers and processing plants in South Carolina can earn a $75 state tax credit for each deer carcass they process and donate. You must be licensed with the state or the U.S. Department of Agriculture and you must have a contract with a qualified nonprofit that distributes food to the needy. If you use any of the deer for commercial purposes, you will not qualify for the donation.

Some senators said that they opposed the current plan, but called for a bipartisan tax reform package.

"I am concerned that today’s proposal would give most of the benefits to those at the top and would take away important tax incentives for Michigan manufacturers," Michigan Sen. Debbie Stabenow said in a statement. "As we work on reform in the coming months, the bottom line for me is that any reform must be bipartisan, help Michigan families and create Michigan jobs."

And at least two Democrats appeared open to a potential plan.

Trump is set to fly with Sen. Joe Donnelly on Wednesday to a rally in the senator's home state of Indiana, where Trump will stump for tax reform. Earlier this month, Trump appeared alongside North Dakota Sen. Heidi Heitkamp at a tax reform speech. Both senators are up for reelection later this year in states that overwhelmingly supported Trump.

Trump met with a bipartisan group of congressional leaders from the House Ways and Means Committee on Tuesday, though many Democrats remained skeptical the plan wouldn't seriously benefit top income earners.

NOW WATCH: Why you won't find a garbage can near the 9/11 memorial

SEE ALSO: Comedy Central is debuting a new show that wants to be Colbert for the Trump era