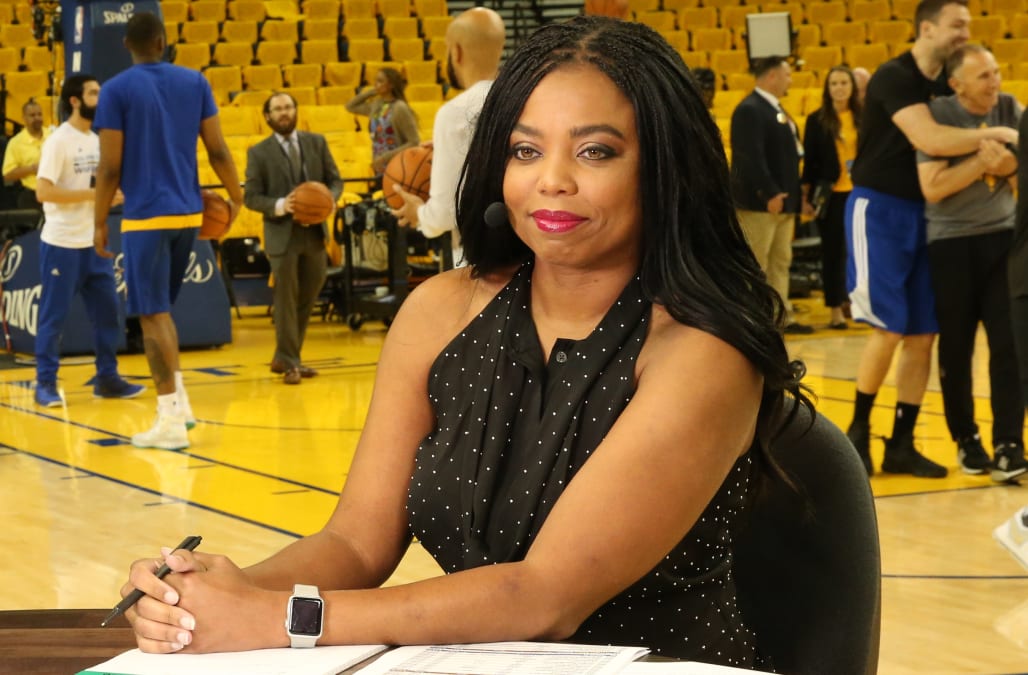 The SportsCenter co-host opened up on Wednesday about watching her employer "become a punching bag" because of her comments calling the president a white supremacist.

"Twitter wasn’t the place to vent my frustrations," Hill admits, further stating that the social media platform isn't the best place for "nuanced, complicated discussions" about race and social issues.

She connects the feeling she had of letting her employer and colleagues down to a story from her childhood, when she disappointed her grandmother by succumbing to peer pressure from friends and stealing beer from the fridge.

"I was heartbroken because I felt like I had let my grandmother, who was one of my best friends, down," Hill wrote. "And there is no feeling worse than letting down the people who love and support you."

That feeling of disappointment again reared its head during Hill's meeting with ESPN president John Skipper, which the SportsCenter anchor cites as "the first time I had ever cried in a meeting."

On September 11, ESPN's Jemele Hill tweeted that President Trump was a "white supremacist," to which ESPN responded that Hill's remarks were "inappropriate."

Social media was quick to sound off on the controversy ...

We are with you @jemelehill ✊🏾
Poor @jemelehill ! If this twit ever opened a book she might learn that white supremacy is the legacy of the party… https://t.co/Kix3KzXRYv
@jemelehill @Millz2BeMade Fire this racist, no talent, non educated POS...shes a joke & works at ESPN for ONE reaso… https://t.co/R8MnM4mMaf
@jemelehill thank you for speaking the truth. Im sorry u are being silenced. But u are 100 percent right about trump
@vlov327 @Kaepernick7 @jemelehill Donald Trump is not, never was, never will be a White Supremacist. Saying that he… https://t.co/R1VrvDcR4L
I hope despite what her employer decided@jemelehill feels the overwhelming love and support for her & her stance was 100% correct.
All the white tears over Jemele Hill this morning 😂 #jemelehill
@jemelehill I dont understand how uneducated people continue to get jobs in the media. Sports or otherwise.
@jemelehill It's crystal clear that anyone who doesn't share your insular, bigoted, racist views, u label them as r… https://t.co/EqvPtjx1j8
@jemelehill Everything you said was the truth 💯it amazes me the studity in ppl. Damn shame
@jemelehill You should be fired. Goes to show bigots come in all shapes and sizes. #BoycottESPN
I like @jemelehill but when will celebrities realize I care about your opinion on sports and nothing else. #StayInYourLane
We are with you @jemelehill #StayWoke✊🏾
So because @realDonaldTrump is "president" he's above criticism? @jemelehill keep talking that that talk. They don't wanna hear the truth
And yet somehow Jemele Hill was being inappropriate? Nah. https://t.co/AGMSZnDr0u https://t.co/2JahScBHwW
Up Next

While Hill acknowledged that Twitter was not the best place for her comments to be made, she did not back down from her opinions. Hill reemphasized that she feels this is a challenging time for the United States, especially for marginalized citizens suffering from the effects racism and white supremacy.

"As a career journalist, I can’t pretend that I don’t see what’s happening in our world," Hill stated. She referenced the president's recent attacks on NFL players protesting during the national anthem as well as his choice to disinvite Stephen Curry and the Golden State Warriors from the White House as reasons why staying silent is no longer an option for her, despite politics not being her job.

"Yes, my job is to deliver sports commentary and news," Hill wrote. "But when do my duties to the job end and my rights as a person begin?"

You can read Hill's entire personal essay on The Undefeated.

More from AOL.com:
Curt Schilling again rips ESPN for having 'some of the most racist people in sports'
Trump slapped with ethics complaint over call to fire NFL players who protest
Former CIA officer apologizes for tweeting story blaming Jews for US wars