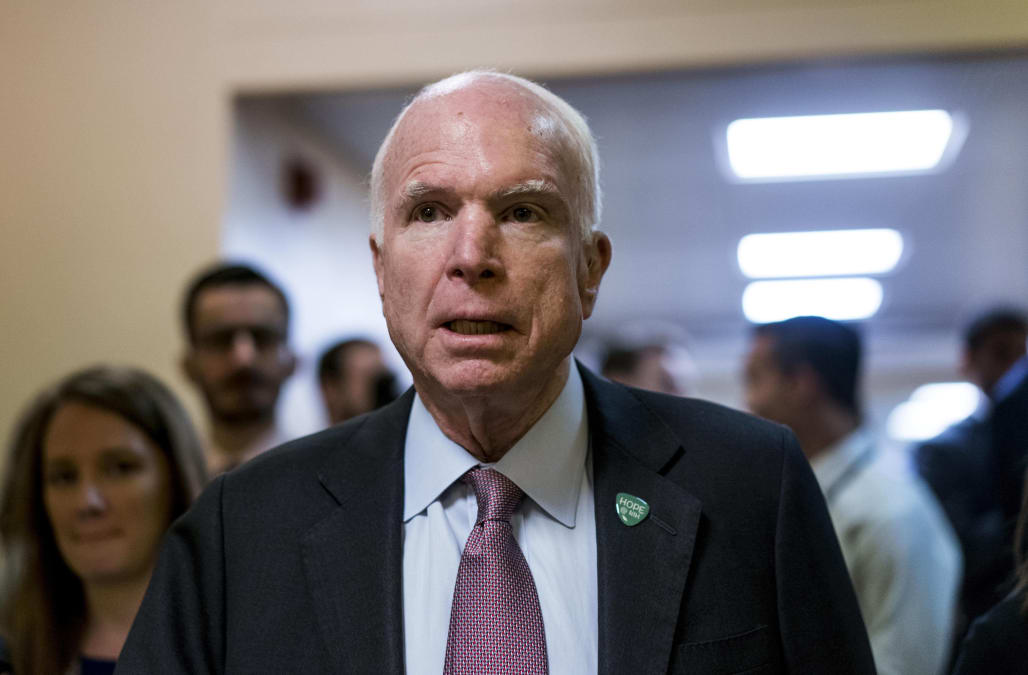 Sen. John McCain of Arizona has glioblastoma, an aggressive form of brain cancer.

McCain, who is 81, had brain surgery in July to remove a blood clot above his left eye. His doctors determined the clot was connected to brain cancer. Shortly after, McCain returned to Washington to dramatically vote down the GOP's healthcare bill, before returning to Arizona for treatment.

McCain told CBS News' "60 Minutes" that doctors are treating the brain cancer with radiation and chemotherapy. While the prognosis is never good for glioblastoma, McCain's perspective is positive.

"They said that it's very serious. That the prognosis is very, very serious," McCain told 60 Minutes. "Some say three percent, some say 14 percent. You know, it's a very poor prognosis. So I just said, 'I understand. Now we're gonna do what we can, get the best doctors we can find and do the best we can.' And, at the same time, celebrate with gratitude a life well lived."

Glioblastoma is the most commonly diagnosed form of brain cancer, though it's still quite rare, with only three cases per 100,000 people.

With the combination of treatments, the median survival rate (a measure of how long patients on the treatment tend to survive) is 14.6 months, according to the American Brain Tumor Association. The ABTA noted that the five-year survival rate for glioblastoma, or the percentage of people alive five years after receiving the diagnosis, was just 10%. Children with glioblastoma tend to fare better than adults.

Why brain tumors are tough to treat

Treating brain cancer is very different from treating cancer in any other part of the body because of the blood-brain barrier, which stops certain pathogens and molecules from passing from the blood into the brain. The blood-brain barrier is key to keeping the brain safe, but because it's good at keeping things out, it's also hard to get drugs like chemotherapy in.

There's also the challenge of tackling the mix of different cells that make up the tumor.

"The cells don't all behave the same way, so even when you kill some, the residual cells can take hold and grow again, so you're fighting a constant uphill battle to get rid of every last cell," Susan Chang, the director of neuro-oncology at the University of California at San Francisco, told Bloomberg in July.

Former Vice President Joe Biden has consistently voiced his support for McCain. Biden's son Beau died in 2015 from brain cancer at 46. Biden subsequently launched a cancer moonshot initiative that has brought him into contact with cancer doctors, researchers, and executives from around the world to discuss new treatment options for the disease.

Incredible progress in cancer research and treatment in just the last year offers new promise and new hope. You can win this fight, John.

There have been numerous medical advances in the treatment of cancer in the past few years. One major advance has been immunotherapy. Unlike chemotherapy, which involves administering powerful drugs that kill both cancerous and healthy cells (most healthy cells can repair themselves), immunotherapies harness the power of the immune system to help it identify and knock out just the cancerous cells. It doesn't appear that McCain is using these approaches for now.

Researchers are exploring whether these immunotherapies could also fight glioblastoma, though there have been some setbacks and cases in which survival hasn't improved.

More from Business Insider:
A full breakdown of the dramatic 19 seconds when McCain killed the GOP's healthcare bill
Scientists have developed a new weapon in the fight against cancer
Supporters of a GOP insurgent in the Alabama Senate race are capitalizing on 3 words from Trump about his opponent