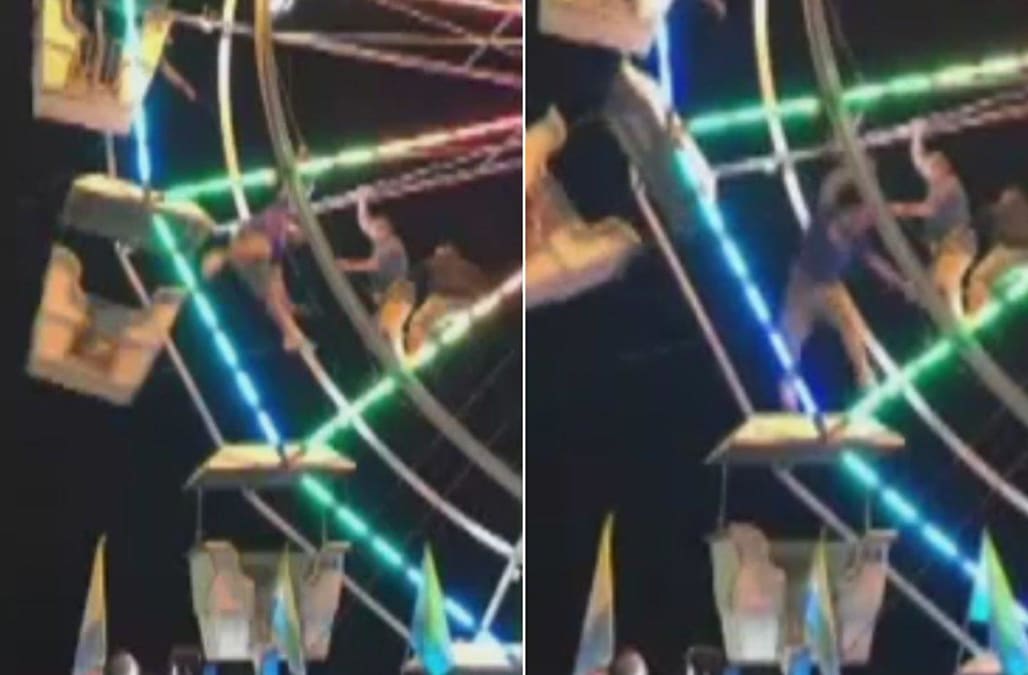 A fair employee in Greensboro, N.C., found himself in a frightening position as he climbed a Ferris wheel to save two children stuck aboard the stalled ride, according to WISTV.

Video from the harrowing rescue attempt shows the cart carrying a 5-year-old and his friend ready to tip upside down. The boy's mother, Angela Roach, watched from below.

"Once the caboose finally stopped, it's almost at a 90-degree angle. I'm scared. What do I do? I'm begging for help. And then I see a gentleman run up beside of it to assist," she said.

The worker began climbing the metal frame of the Ferris wheel only to lose his footing on his way up. He slips, slams into a carriage below and continues falling toward the ground.

Despite having taken a few hits, police told WISTV the fair employee walked away with just a broken finger.

Roach told the outlet she's "beyond thankful" to the kind stranger who risked everything to save her son Hunter and his friend.

"I'm beyond thankful that he risked his own life - he could have fallen - he did fall, but he wouldn't know that, and I'm thankful that he did. Once it broke loose and they started pulling it down, I could see Hunter's face, and I saw smiles," she told the news station.

Although both children were uninjured in the accident, Roach told WISTV she feels there should be more safety precautions in place at such events.

"There needs to be extra training, something, because where was a firetruck? A fire truck would have been safer for every single one of them. What other things can they do to prepare themselves for this?" She questioned.

Regardless, Roach has been to her last fair and her son won't be riding the Ferris wheel again soon, according to comments she made to the news outlet.

"I will never go back to another fair. I will never put him on another ride like that," she said.

An investigation is underway to determine the cause of the ride malfunction. Even with the investigation underway, the Ferris wheel was on and active on Saturday and Sunday following an inspection from the state.