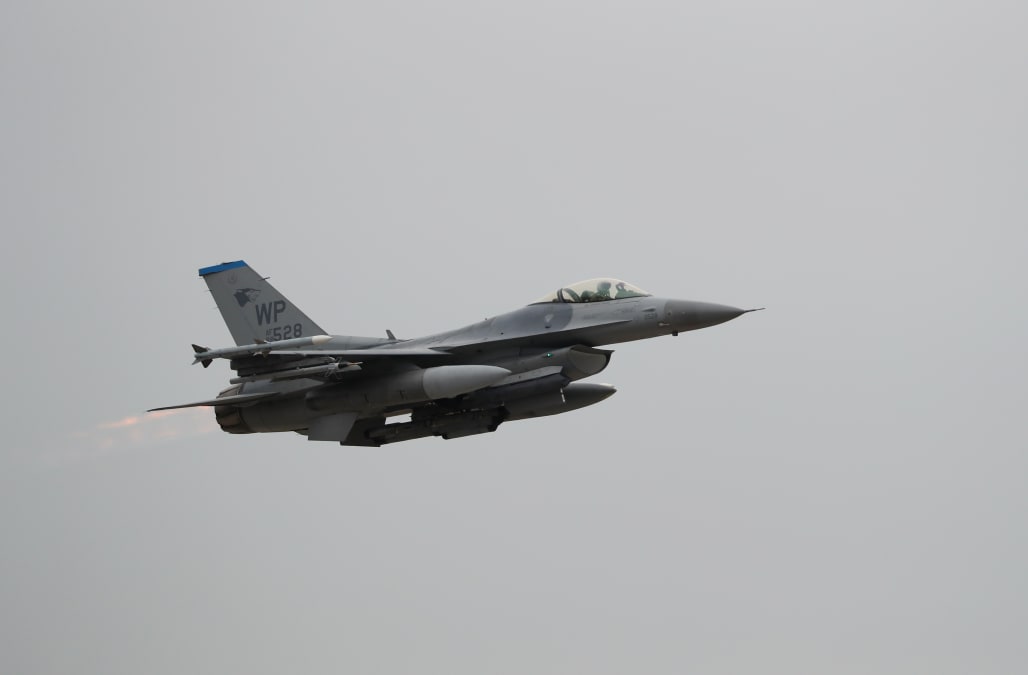 Rescue efforts were under way after the fighter jet crashed at about 3 p.m. mountain time (5 p.m. EDT) some 20 miles northwest of the city of Safford, the Air National Guard said in a statement.

The crash occurred during training exercises out of Tucson International Airport, the Guard said.

An interim safety board has been assembled by the U.S. Air Force to investigate the incident.

A look at F-16 fighter jets
A US Air Force F-16C Fighting Falcon performs its flight routine during the Australian International Airshow in Melbourne on March 5, 2017. The annual event sees 180,000 visitors over the 3-day public event held at the Avalon Airfield some 80kms south-west of Melbourne. / AFP PHOTO / MAL FAIRCLOUGH (Photo credit should read MAL FAIRCLOUGH/AFP/Getty Images)
OHAKEA, NEW ZEALAND - FEBRUARY 25: A United States Air Force F-16 puts on a flying display at the 2017 Air Tattoo at RNZAF Base Ohakea on February 25, 2017 in Ohakea, New Zealand. The Royal New Zealand Air Force is celebrating its 80th Anniversary. (Photo by Kerry Marshall/Getty Images)
US Air Force F-16 Fighting Falcon performs during 'Air Power Day' preview at US Osan Air Base in Pyeongtaek on September 23, 2016. An American strategic bomber arrived in South Korea on September 21 in a show of force the US said was aimed at reminding Pyongyang of its powerful military assets in the region. The event will be held for two days from on September 24. / AFP / JUNG YEON-JE (Photo credit should read JUNG YEON-JE/AFP/Getty Images)
Lockheed Martin's F16, the 4th generation advanced fighter of the US Air Force, taxis on the tarmac on the inaugural day of the 11th edition of 'Aero India', a biennial air show and aviation exhibition, in Bangalore on February 14, 2017. / AFP / MANJUNATH KIRAN (Photo credit should read MANJUNATH KIRAN/AFP/Getty Images)
This photograph taken on November 12, 2016 shows a Singapore's RSAF's F-16 landing on a public road in Lim Chu Kang area during a media preview in Singapore. A public road was converted into a runway as part of the Republic of Singapore Air Force (RSAF) exercise Torrent for an alternate runway exercise to increase its aircraft take-off and landing capabilities. / AFP / ROSLAN RAHMAN (Photo credit should read ROSLAN RAHMAN/AFP/Getty Images)
A picture taken on June 28, 2016 shows an Israeli Air Force F-16 fighter jet preparing to take off at the Ramat David Air Force Base located in the Jezreel Valley, southeast of the Israeli port city of Haifa. / AFP / JACK GUEZ (Photo credit should read JACK GUEZ/AFP/Getty Images)
Fighter pilots stand near F-16 Fighting Falcon during the opening ceremony of NATOs large scale exercise Trident Juncture 2015 at the Italian Air Force Base in Trapani, Sicily. AFP PHOTO / MARCELLO PATERNOSTRO (Photo credit should read MARCELLO PATERNOSTRO/AFP/Getty Images)
EGYPT - 2015/07/31: The Egyptian Air Force partakes in an airshow above Cairo as the Egyptian air force celebrates eight new F-16 jets delivered to Egypt by the United States. (Photo by Ahmed Abdel Fattah/Pacific Press/LightRocket via Getty Images)
NEW YORK, NY - MAY 22: The US Air Force Thunderbirds consisting of six F-16 aircraft perform a flyover over New York Harbor on May 22, 2015 in New York City. The flyover is part of the 2015 NYC Fleet Week festivities. (Photo by Michael Heiman/Getty Images)
AVALON, AUSTRALIA - FEBRUARY 27: F-16C Fighting Falcons from the Republic of Singapore Air Force fly past each other as they perform at The Australian International Airshow on February 27, 2015 in Avalon, Australia. The Australian International Airshow 2015 pays tribute to Anzac and the heroes of military aviation. Also featured is the latest military heavy metal from Australia and overseas including super sonic jet fighters and attack helicopters. (Photo by Scott Barbour/Getty Images)
Up Next