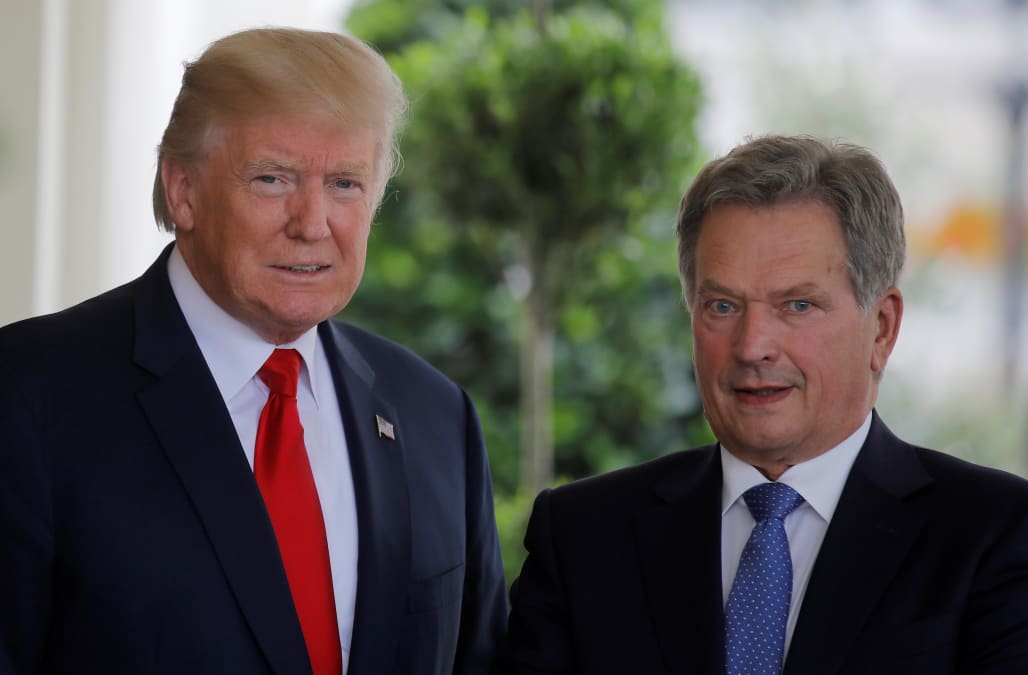 President Donald Trump hosted Finnish President Sauli Niinistö at the White House on Monday, during which the pair partook in a joint press conference.

The president made his first public comments on Hurricane Harvey, aside from his previous tweets about the storm and emergency responses.

Trump tweets about Hurricane Harvey
I have spoken w/ @GovAbbott of Texas and @LouisianaGov Edwards. Closely monitoring #HurricaneHarvey developments & here to assist as needed.
Received a #HurricaneHarvey briefing this morning from Acting @DHSgov Secretary Elaine Duke, @FEMA_Brock,… https://t.co/VGdeIdgLbO
I encourage everyone in the path of #HurricaneHarvey to heed the advice & orders of their local and state officials. https://t.co/N6uEWCZUrv
Just arrived at Camp David where I am closely watching the path and doings of Hurricane Harvey, as it strengthens to a Category 3. BE SAFE!
Just arrived at Camp David, where I am monitoring the path and doings of Hurricane Harvey (as it strengthens to a Class 3). 125 MPH winds!
Storm turned Hurricane is getting much bigger and more powerful than projected. Federal Government is on site and ready to respond. Be safe!
At the request of the Governor of Texas, I have signed the Disaster Proclamation, which unleashes the full force of government help!
You are doing a great job - the world is watching! Be safe. https://t.co/PJLdxy3hD9
.@ChuckGrassley - got your message loud and clear. We have fantastic people on the ground, got there long before #Harvey. So far, so good!
Closely monitoring #HurricaneHarvey from Camp David. We are leaving nothing to chance. City, State and Federal Govs. working great together!
Wonderful coordination between Federal, State and Local Governments in the Great State of Texas - TEAMWORK! Record setting rainfall.
Great coordination between agencies at all levels of government. Continuing rains and flash floods are being dealt with. Thousands rescued.
Many people are now saying that this is the worst storm/hurricane they have ever seen. Good news is that we have great talent on the ground.
I will be going to Texas as soon as that trip can be made without causing disruption. The focus must be life and safety.
Wow - Now experts are calling #Harvey a once in 500 year flood! We have an all out effort going, and going well!
Going to a Cabinet Meeting (tele-conference) at 11:00 A.M. on #Harvey. Even experts have said they've never seen one like this!
HISTORIC rainfall in Houston, and all over Texas. Floods are unprecedented, and more rain coming. Spirit of the people is incredible.Thanks!
Up Next