Trump shares 'eclipse' meme of him blocking out Obama 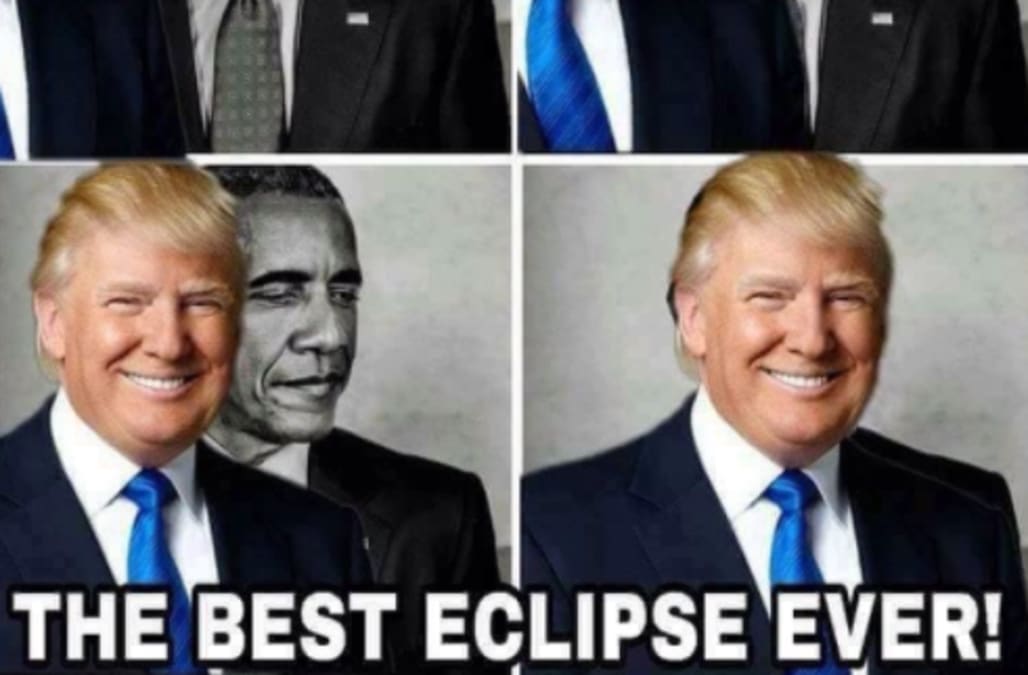 Social media users were quick to point out that eclipses, by nature, are short lived phenomena:

"Did staring directly at the sun make Trump forget that a eclipse ends, quite soon after it starts?" Kelly McLaughin wrote.

Did staring directly at the sun make Trump forget that a eclipse ends, quite soon after it starts? pic.twitter.com/kgtzQUiJZd

Twitter reacts to Trump's sharing 'eclipse' meme of him blocking out Obama
Hewitt tells Graham that Trump RT'ed the Obama eclipse pics. Graham: "Hahahaha...The media has gone absolutely insane over his insanity"
This is what drives #Trump— "Vindictiveness" That's his platform. He will NEVER eclipse #Obama. His achievements wi… https://t.co/9BNkcir7VX
And like an eclipse we can hope that it only lasts about 3 minutes. https://t.co/GlzIFAinKt
Did staring directly at the sun make Trump forget that a eclipse ends, quite soon after it starts? https://t.co/kgtzQUiJZd
A potential major hurricane is bearing down on the Texas coast, we have no NOAA director, and Trump is tweeting eclipse memes.
@kylegriffin1 Soo if Obama is the sun and Trump is the moon, does that mean Obama gets to come back and be presiden… https://t.co/9eHxilkmbT
@julianborger @tasneem_jamal So in this analogy Trump is the moon and Obama is the sun? I wish Trump's presidency w… https://t.co/jUosK6vlea
Look what @realDonaldTrump retweeted! In a true eclipse the moon moves away and we are left with the Sun shining b… https://t.co/IIv3rZeydA
Dear Trump, you DO understand how an eclipse works, right? Open this for help. https://t.co/nHxb7tOBeD
@JerryTravone @realDonaldTrump & like a REAL Eclipse, the best part of this will be when Trump continues to move to… https://t.co/drkNPIifJX
@MSignorile Trump's presidency should only last as long as an eclipse.
Trump just retweeted this. He understands what happens *after* the eclipse is over, right? https://t.co/P7sgV3OGyT
Maybe Trump will retweet this other hysterical gem by his eclipse buddy next. https://t.co/7jZ0YFFq34
Up Next