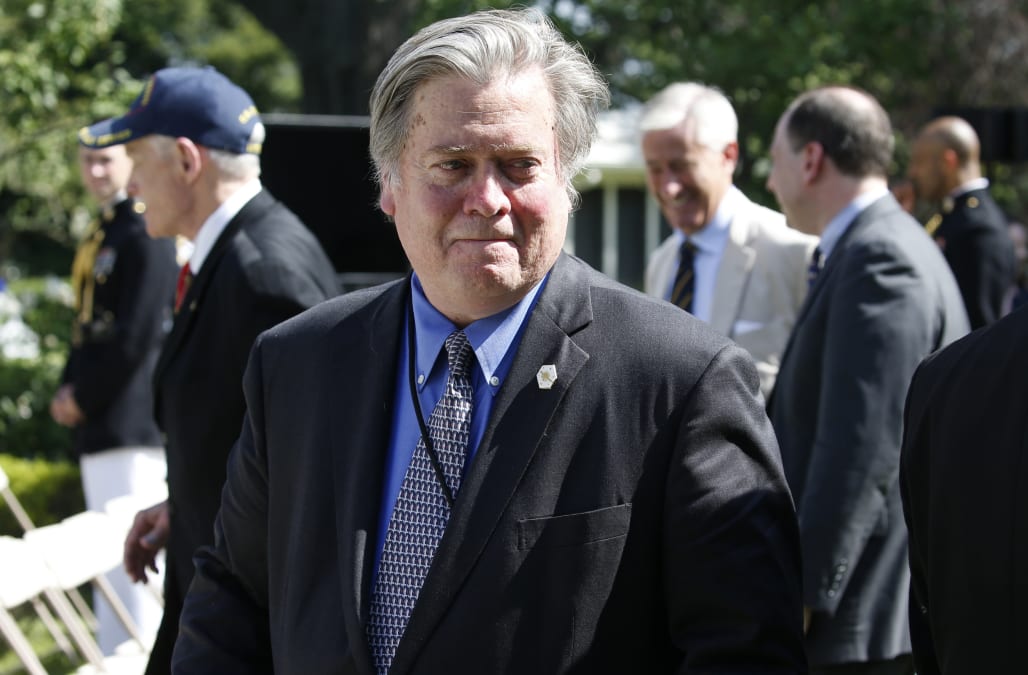 Steve Bannon shared some candid thoughts on a wide range of subjects in an interview with the progressive-leaning magazine, The American Prospect, published on Wednesday.

The interviews reveal Bannon's thoughts on President Donald Trump's US-China trade policy, his own views about the president's rancorous feud last week with the leader of North Korea, the deadly Charlottesville rally, white nationalist groups, and his ongoing feuds inside the Trump administration.

The White House chief strategist also pitched what American Prospect writer Robert Kuttner described as a plan to "marginalize" his adversaries in the Trump administration.

Bannon talked of Trump's plans to sign a measure that would open an investigation into intellectual property violations against American companies by Chinese firms. The law under which that measure was drafted, Section 301 of the US Trade Act of 1974, would allow Trump to place a tariff on another country without Congressional approval.

The plans to reshape US-China trade policies do not end there, Bannon indicated. He talked of shifting people within the Trump administration to achieve expansive goals on that front.

"I'm changing out people at East Asian Defense; I'm getting hawks in," Bannon said. "I'm getting Susan Thornton [acting head of East Asian and Pacific Affairs] out at State."

Steve Bannon, Chief Strategist for US President-elect Donald Trump, talks on the phone outside Trump Tower in New York on December 9, 2016.

Republican presidential nominee Donald Trump's campaign CEO Steve Bannon holds a campaign rally the Reno-Sparks Convention Center November 5, 2016 in Reno, Nevada. With less than a week before Election Day in the United States, Trump and his opponent, Democratic presidential nominee Hillary Clinton, are campaigning in key battleground states that each must win to take the White House.

Steve Bannon gets off the plane with US President-elect Donald Trump arrives at Cincinnati/Northern Kentucky International Airport in Hebron, Kentucky, for the start of the 'USA Thank You Tour' at the US Bank Arena in Cincinnati, Ohio, December 1, 2016.

Steve Bannon, chief strategist for Donal Trump, leaves after the motorcade of US President-elect arrived at Trump Tower on December 10, 2016 in New York.

Kuttner openly questioned why Bannon, a former executive of the far-right news outlet Breitbart, called him — a reporter for a progressive-leaning publication — to sound off about some of his biggest plans for the White House's economic agenda.

"Bannon explained that his strategy is to battle the trade doves inside the administration while building an outside coalition of trade hawks that includes left as well as right. Hence the phone call to me."

Bannon said later that he was unaware the conversation was on-the-record.

Working amid calls for his firing

Bannon's comments came after days of scorching fallout from Trump's response to a deadly white nationalist rally in Charlottesville, Virginia. The president has been dragged by Republican and Democratic leaders, and abandoned by CEOs of some of the biggest American corporations after Trump wavered in his denunciations of some hate groups involved in the violence.

"Ethno-nationalism—it's losers. It's a fringe element," Bannon said, apparently referring to demonstrators without describing any specific ethnicity, adding that "the media plays it up too much."

"These guys are a collection of clowns," Bannon said.

Some critics have pointed to Bannon, who they accused of influencing Trump's reactions to the violence in Virginia. Although Bannon spoke with Trump several times last weekend, according to the news website Axios, he "has not meaningfully advised" Trump on his response to Charlottesville, the publication said.

Bannon's immediate future in the White House has also been called into question in the aftermath of Charlottesville, with several lawmakers urging Trump to fire him. Trump saidduring a fiery news conference on Tuesday: "We'll see about Mr. Bannon."

NOW WATCH: Watch the most bizarre moments from Trump’s speech to the Boy Scouts of America