Texas has the highest maternal mortality rate in the developed world. Why? 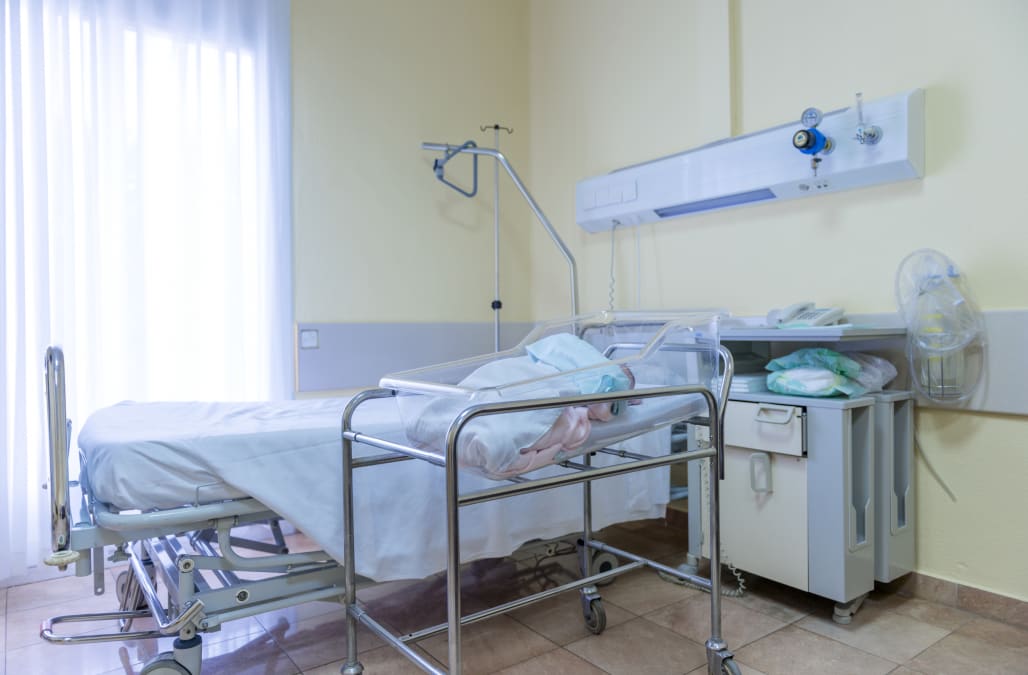 Clutching his newborn daughter, Chris Zavala pleaded with the staff at a Texas urgent-care clinic to save his wife, Michelle.

It was July 26 — eight days after Michelle gave birth. The Zavalas had rushed in after Michelle complained of tunnel vision, of feeling like she was going to faint. But now, lying in a bed at the clinic, Michelle wasn't saying anything at all. Her eyelids were drooping. Her expression had turned listless.

"Do something. Someone, do something," Zavala begged.

A nurse looked at Michelle, then yelled for assistance, Zavala told NBC News. Chest compressions were performed. A tube was placed down Michelle's throat.

But it was too late. Just over a week after she welcomed her daughter Clara in a routine labor and delivery, Michelle died of a pulmonary embolism at age 35.

"All I could do was sit there and hold Clara and cry," Zavala said. "I can't help but feel as though we let Michelle down, that she did not receive the postpartum care that she should have."

Related: Best hospitals in the world

20 PHOTOS
US News: Best Hospitals in the US 2017
See Gallery

10. Hospitals of the University of Pennsylvania-Penn Presbyterian, Philadelphia

Michelle Zavala is one of a startlingly high number of women in Texas who have died after childbirth. The state has the highest number of pregnancy-related deaths not just in the United States — but in the entire developed world.

Health officials are puzzled as to why the statistics are so high in Texas. A state task force has identified some of the reasons why the state is failing its new mothers, but says more research is needed.

"Every day, the clock is ticking down. This is a true women's health crisis."

To enable that, Democratic state Rep. Shawn Thierry is sponsoring a bill that would extend funding for the state's Maternal Mortality and Morbidity Task Force, a group formed in 2013, so it could continue its work until 2026. The bill passed in the House and is one of 20 pieces of legislation being reviewed by Texas lawmakers in a special session that ends Aug. 18.

"Every day, the clock is ticking down," said Thierry, who suffered a life-threatening complication to an epidural during her own labor in 2012. "This is a true women's health crisis."

Thierry is particularly concerned with the demographics of the state's maternal mortality rate. While black mothers make up just 11 percent of Texas' live births, they account for nearly 29 percent of the maternal deaths, the report found in 2016. (The state defines maternal deaths as those that occur within a year of childbirth, excluding car accidents and non-pregnancy-related cancers.)

"We've got to look at the group that's being most affected and solve it for that group," Thierry said. "Then I feel like everyone will benefit."

The task force has identified some contributing factors on why women of all races are dying after childbirth — including having babies later in life, or having health problems such as obesity, chronic high blood pressure, and diabetes.

The rise in cesarean sections and related complications, plus delaying prenatal care until late in pregnancy, were also found to be factors, said Dr. Lisa Hollier, chair of the task force and president-elect of the American Congress of Obstetricians and Gynecologists.

"The next step that we took was we looked at these chronic problems, like obesity, high blood pressure, and diabetes, and found that the frequency of those conditions has also been increasing in Texas over time," Hollier said.

Other theories haven't panned out.

After abortion rights advocates pointed to the closure of dozens of women's health clinics throughout the state as a result of a 2013 law requiring them to meet the same medical standards as standalone surgery centers, the task force looked for a correlation. But the biggest spike in maternal mortality rates in Texas happened between 2010 and 2012 — before the clinics were shuttered.

"It would be easy to say [that's a cause] and a knee-jerk reaction is to say yes," Thierry said. "But the task force and others haven't provided me the data for that."

While Texas has the worst maternal mortality rate in the nation, America as a whole struggles, too. In every other wealthy country around the world, rates have been decreasing, but in the U.S. they increased from 2000 to 2014.

In reaction, certain regions have adopted practices to reduce maternal mortality. California is leading the way with the California Maternal Quality Care Collaborative, a decade-old model that gives doctors and nurses specific tools for specific obstetric emergencies — hemorrhage carts for storing supplies in the event of bleeding, protocols for pre-eclampsia and other serious conditions during pregnancy, for example.

The tools have worked: Maternal deaths in California fell to around 7 per 100,000 births by 2013, according to a recent ProPublica story exposing weaknesses in America's postpartum healthcare.

Texas launched a similar collaborative last year in the hopes of emulating the results.

"California has done an excellent job," Hollier, the chair of the Texas task force, said. "Our collaborative is new, but we are looking forward to being able to implement these same kinds of programs that have proven effectiveness to reduce maternal mortality."

Related: Childbirth over the years

Childbirth over the years
A woman being helped to give birth, on a birth chair, by two midwives, each pulling on a cloth wrapped around the mother's belly, California, USA, circa 1840. (Photo by Hulton Archive/Getty Images)
Albert the Great, De Animalibus, folio 145, Difficult childbirth, 15th, FranceParis, Bibliotheque Nationale. (Photo by Photo12/UIG/Getty Images)
Bettmann
A wet nurse holds a newborn baby surrounded by the birth mother and the new siblings. (Photo by Jonathan Kirn/Corbis via Getty Images)
Lucy Baldwin (1869 - 1945, centre), the wife of former British Prime Minister Stanley Baldwin, with a baby born by caesarean section, at Queen Charlotte's Hospital, London, 7th February 1930. With her are the surgeon (left) and anaesthetist, who performed the operation. Baldwin is the founder of the Anaesthetics Appeal Fund of the National Birthday Trust Fund (N.B.T.F.), which campaigns for wider provision of analgesia in childbirth. (Photo by Hulton Archive/Getty Images)
July 1939: In an effort to make childbirth as painless as possible, a patient inhales analgesia during labour whilst a nurse looks over her. (Photo by London Express/Getty Images)
Soldier's Son: Pregnancy And Childbirth In Wartime, Bristol, England, 1942, Sister Gwendoline Murphy hands a screaming two-day-old Peter Winston Stacey to his mother Irene for feeding at Southmead Hospital in Bristol. The babies sleep in multiple cots in the nursery and are brought back to their mothers at feeding time, 7 September 1942. (Photo by Ministry of Information Photo Division Photographer/ IWM via Getty Images)
Three pyjama-clad little boys are introduced to their newborn baby sister, Janet Lewington, by the midwife after a home delivery in Mottingham, Kent, 4th August 1946. Original Publication : Picture Post - 4201 - A Baby Is Born At Home - pub. 31st August 1946 (Photo by Merlyn Severn/Picture Post/Hulton Archive/Getty Images)
A nurse in the maternity unit of a hospital keeps an eye on the pressure from the oxygen cyclinder, as they care for a lillte baby girl. January 1949. (Photo by Daily Mirror/Mirrorpix/Mirrorpix via Getty Images)
An expectant mother using an inhaler to take the pain killing drug trilene during labour, watched by a hospital midwife. 29th March 1949. (Photo by Daily Mirror/Mirrorpix/Mirrorpix via Getty Images)
A nurse handing a newly born baby to its mother, 1956. Original Publication: Picture Post - 9111 - Analgesia - unpub. (Photo by Grace Robertson/Picture Post/Hulton Archive/Getty Images)
28th May 1965: Three pregnant women relax in medical 'space-suits' in an attempt to ease childbirth and raise the intelligence of their offspring. A suction pump next to the chairs lowers pressure inside the suits, while a gauge in front of them gives a constant reading. (Photo by Evening Standard/Getty Images)
UNSPECIFIED - JANUARY 01: Felix Gaillard, His Wife And Her Daughter Isabelle In 1958. (Photo by Keystone-France/Gamma-Keystone via Getty Images)
The newly born Letts quintuplets in their incubators at University College Hospital. Father John Letts surveys his instant family of quintuplets as they lie in their incubators at University College Hospital. December 1969 Z12130-010 (Photo by WATFORD/Mirrorpix/Mirrorpix via Getty Images)
Midwife May Guthrie-Lacy photographs the 287th baby which she has delivered at Lytham Hospital. Two day old Nicola Manton and her mother 23 year old Christine will join all the others happy snaps in May Lacy's albums. December 1969 Z12345-002 (Photo by WATFORD/Mirrorpix/Mirrorpix via Getty Images)
The Davis quintuplets and their parents, Jerry and Debbie Davis, pose for a family portrait, their first since the quintuplets' birth on July 18. The quintuplets' names are (left to right) Christa LeJune, Casey Clifton (the only boy), Chanda Jannae, Charla Rae Ann, and Chelsa Lynnae.
JUN 4 1977, JUN 14 1977; St. Luke's Hospital (Gen) Birthing Room.; (Photo By Ernie Leyba/The Denver Post via Getty Images)
Maternity Department, Tenon Hospital In Paris, France. (Photo By BSIP/UIG Via Getty Images)
CANADA - JANUARY 08: New to the world: Mary Dininio of Stroud; Ont.; laughs with joy yesterday moments after giving birth to son Myles; as husband Michael looks on at Women's College Hospital. (Photo by Keith Beaty/Toronto Star via Getty Images)
Up Next

For Zavala, the Texas father whose wife Michelle died last month, those programs came too late. He's left with just eight days of memories of Michelle basking as a new mother.

"She spent a lot of time with Clara sleeping on her chest, which Clara loved, and Michelle loved, too," he said.

Their first weekend home, however, Michelle noticed that one of her feet was swollen, a sign of a possible blood clot. By Monday, the swelling was gone, but Michelle called her doctor anyway — and was told not to worry, Zavala said.

"I don't know who she spoke with, but they made the wrong call. They said if the swelling has gone back down, then it's probably not anything to be concerned about," he said.

Doctors have not told Zavala what caused the pulmonary artery thrombo-embolism, a blood clot that had entered Michelle's lungs. Right now, Zavala is not focused on blame — he's just trying to keep it together for Clara, whose hazel eyes remind him of his wife's.

Relatives are working to help pay for expenses for Clara, and Zavala's parents and in-laws are helping care for the baby.

Clara has already grown and developed in the several weeks since Michelle's death, Zavala said.

"She much more alert, much more awake during the day now," Zavala said of Clara. "It's just a such a shame Michelle is not here to see that."