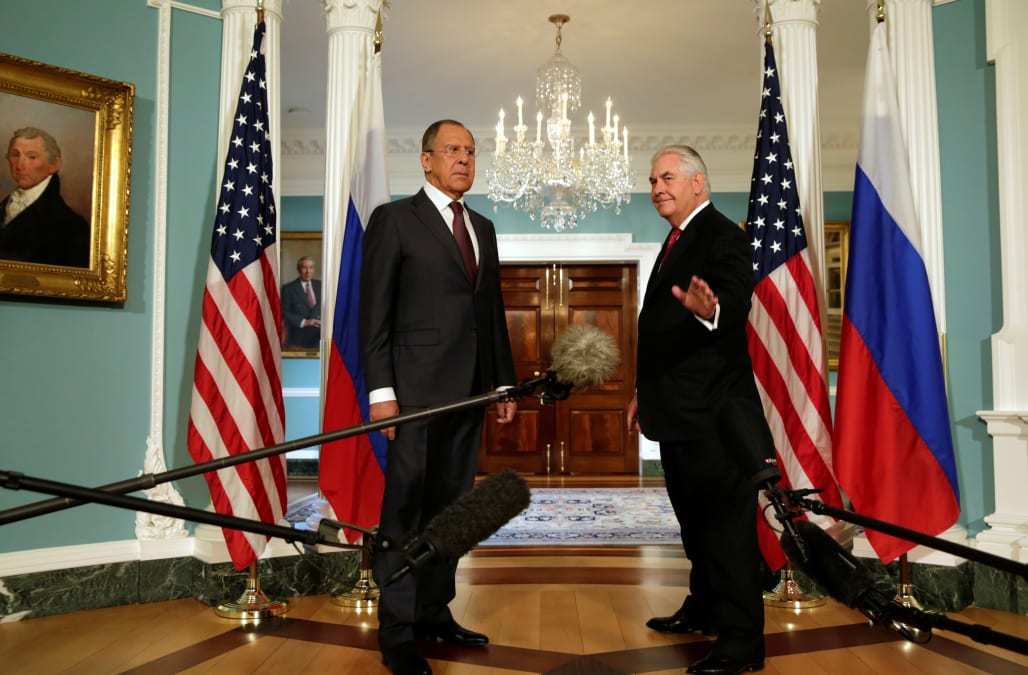 MANILA, Aug 7 (Reuters) - U.S. Secretary of State Rex Tillerson said on Monday he believes Washington and Russia can find a way to ease tension, saying it wouldn't be useful to cut ties over the single issue of suspected Russian meddling in the U.S. election.

Tillerson said Russia had also expressed some willingness to resume talks about the crisis in Ukraine, where a 2015 ceasefire between Kiev's forces and Russian-backed separatists in the eastern part of the country is regularly violated.

"We should find places we can work together... In places we have differences we're going to have to continue to find ways to address those," Tillerson told reporters.

Tillerson met his Russian counterpart, Sergei Lavrov, on the sidelines of an international gathering in Manila on Sunday, where he also asked about Moscow's retaliation to new U.S. sanctions against Russia.

RELATED: Photos of Tillerson and Lavrov

The meeting was their first since President Donald Trump reluctantly signed into law the sanctions that Russia said amounted to a full-scale trade war and ended hopes for better ties.

Lavrov on Sunday said he believed his U.S. colleagues were ready to continue dialog with Moscow on complex issues despite tensions.

Tillerson said he discussed Russia's suspected meddling in the 2016 U.S. presidential election with Lavrov to "help them understand how serious this incident had been and how seriously it damaged the relationship" between the two nations.

But Tillerson said that should not irreversibly damage ties.

"The fact that we want to work with them on areas that are of serious national security interest to us, and at the same time having this extraordinary issue of mistrust that divides us, that is just what we in the diplomatic part of our relationship are required to do," Tillerson said.

The United States sent its special representative on Ukraine, Kurt Volker, a former U.S. envoy to NATO, to Ukraine last month to assess the situation in the former Soviet republic.

Washington cites the conflict as a key obstacle to improved relations between Russia and the United States.

"We appointed a special envoy to engage with Russia but also coordinating with all parties. This is full visibility to all parties. We are not trying to cut some kind of deal on the side," Tillerson said. (Editing by Martin Petty and Nick Macfie)