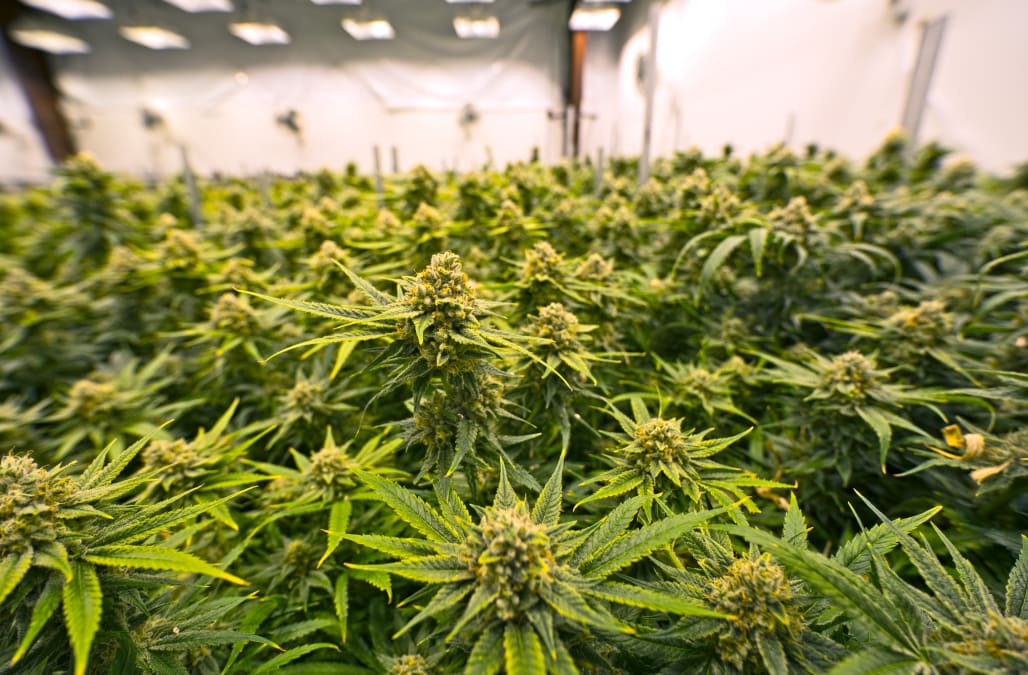 WEAVERVILLE, Calif., Aug 6 (Reuters) - Pollution from illegal marijuana farms deep in California's national forests is far worse than previously thought, and has turned thousands of acres into waste dumps so toxic that simply touching plants has landed law enforcement officers in the hospital.

The volume of banned or restricted pesticides and illegally applied fertilizers in the woods dwarfs estimates by the U.S. Forest Service in 2014, when a top enforcement official testified that the pollution was threatening forest land in California and other states.

California accounts for more than 90 percent of illegal U.S. marijuana farming, with much of it exported to other states from thousands of sites hidden deep inside forested federal land, and more on private property, law enforcement officials said. The state is still developing a licensing system for growers even though legal retail sales of the drug will begin next year, and medical use has been allowed for decades.

Exposure to the pesticides has sent at least five law enforcement officials and two suspects to hospitals with skin rashes, respiratory problems and other symptoms, court documents and state data show.

Use of any chemicals in national forests is against federal law, as pesticides have killed sensitive species and fertilizers can cause algae blooms and bacteria problems in rivers and streams.

According to unpublished data seen by Reuters, Gabriel, who has visited more than 100 sites in California and is widely considered the top expert on toxics at marijuana farms, calculated that federal land in California contains 731,000 pounds of solid fertilizer, 491,000 ounces of concentrated liquid fertilizer and 200,000 ounces of toxic pesticides.

If much of the pesticide and fertilizer were released into a single stream rather than scattered around the state in leaky containers, the volume would exceed the amount of chemicals spilled in 2014 into the Elk River in West Virginia, which left 300,000 residents without access to potable water.

"We're getting contamination over and over again at those locations," said Gabriel, as toxins move from unsafe containers into the soil and water.

At sites that state officials said they had cleaned up completely, his team found 30-50 percent of the chemicals were still there.

"They are like superfund sites," said Assistant U.S. Attorney Karen Escobar, whose Fresno office has filed numerous marijuana-related environmental damage cases. Superfund sites are those targeted by the U.S. government for hazardous waste cleanup because of the risk to human health or the environment.

The most toxic sites cost as much as $100,000 to clean up, leaving taxpayers with a bill that could reach $100 million or more in California alone.

"These places aren't safe to go into," said state Assemblyman Jim Wood, who has pushed for cleanup funding.

Use of toxics has grown over the past three to four years, and chemicals have been found at sites in Oregon and Washington as well, said Chris Boehm, the Forest Service's assistant director for enforcement and investigation. "In the last couple years we've lost a lot of the ground we had picked up in eradicating and cleaning up the new sites we find."

The expense and danger of cleanup has created a backlog of 639 illegal marijuana farms awaiting restoration in California, according to U.S. Forest Service data compiled for Reuters. Each farm covers up to 50 acres.

Gabriel said that figure understated the problem, and pointed out that toxics are used at thousands of illegal farms on private and tribal land. After a year or two, growers often abandon sites, leaving containers of chemicals so toxic a quarter-teaspoon could kill a bear.

As California moves to license growers, officials plan to regulate the use of chemicals. But rules can only be enforced against those who cultivate pot legally.

"There are a lot of incentives for continuing to grow illegally," said Washington Fish and Wildlife Deputy Chief Mike Cenci, citing growers' distaste for taxes and red tape.

"We've got 4,000 illegal grows in our county," said Keith Groves, a supervisor of Trinity County in Northern California. "I'll be happy if we can get 500 of them to become licensed." (Reporting by Sharon Bernstein; Editing by Ben Klayman and Richard Chang)

More from AOL.com:
Al Gore says carbon polluters 'hacked' American democracy 'long before Putin'
Back pain and other unusual signs of lung cancer
There's a 95 percent chance the world will warm beyond a crucial tipping point — here's what that means