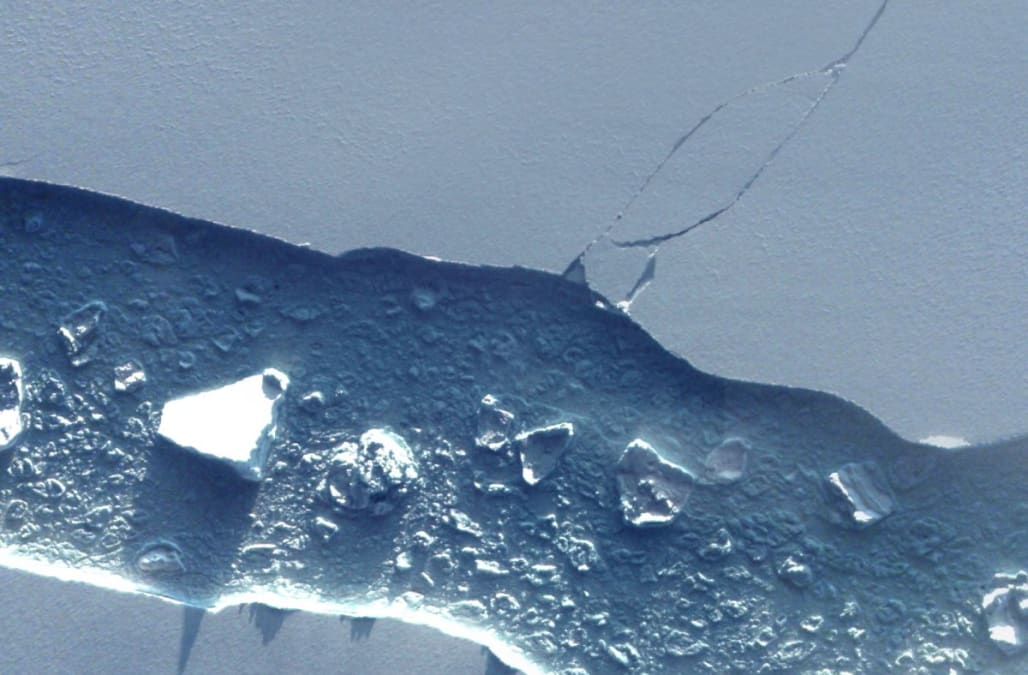 In early July, a rift in Antarctica's Larsen C ice shelf caused the third-largest iceberg ever recorded to break off.

The block of ice, dubbed iceberg A-68, may hang around for years in the open sea, and it is awesome in scale: roughly the area of Delaware, the mass of 5.6 Mount Everests, and voluminous enough to fill Lake Erie — more than twice.

Because it's the middle of winter in Antarctica, though, scientists have struggled to get good optical images of the iceberg. So far, they've relied on polar satellites like Sentinel-1, which uses radar to see through thick cloud cover.

However, a few days of clear weather in late July gave Deimos-1 and Deimos-2 — a pair of satellites that operate as a tag-team — a clear, visible-light view of the scene on the eastern Antarctic Peninsula.

Here are the new photos, released by Deimos Imaging and Urthecast in an August 3 blog post, and what they show:

Deimos-1 and Deimos-2 follow similar orbits and work together to image the same spots on the ground in medium- and very-high-resolution.

In late July, the satellites passed over the Antarctic Peninsula and the eastern edge of its Larsen C ice shelf — where iceberg A-68 had broken off of two weeks earlier.

Deimos-1 captured the iceberg in this wider-angle. "This is actually then first visible-light image of A68 that I have seen," Luckman said, "and it shows nicely how the perennial sea ice in the Weddell Sea is hemming A68 in and will probably keep it where it is for a long time."

Days later, Deimos-2 swung by and took two zoomed-in, very-high-resolution images of the iceberg and the rift that spawned it. This view shows a central section of the rift.

And this image shows a northern region of the iceberg and ice shelf.

Here's how those images fit together in the larger context of the ice shelf.

Zooming in on some of the details from Deimos-2 is revealing. This image shows mini-icebergs in a slush of ice between A-68 and the main Larsen C ice shelf.

The sun — low on the horizon during Antarctic winter — casts long shadows that reveal the cliff-like edges of the rift and its iceberg chunks.

Similar details pop out in a scene of the iceberg's northernmost flank. On the top right, a new crack in the Larsen C ice shelf is visible.

This image shows the point where Larsen C meets A-68 and a new broken-off chunk of the iceberg.

Glaciologists say iceberg A-68 will continue to break into smaller chunks as it floats northeast and into the opens seas of the Southern Ocean.

Most likely, iceberg A-68 will drift toward the warmer waters of Falkland Islands, though many larger icebergs go farther east to the South Georgia and South Sandwich Islands.

In just two to three years, the new iceberg could fully melt — or at least turn into countless chunks of sea ice.

More from AOL.com:
Toddler hospitalized with E. coli after swimming in lake
There's a 95 percent chance the world will warm beyond a crucial tipping point — here's what that means
The Gulf of Mexico's 'dead zone' is the biggest on record