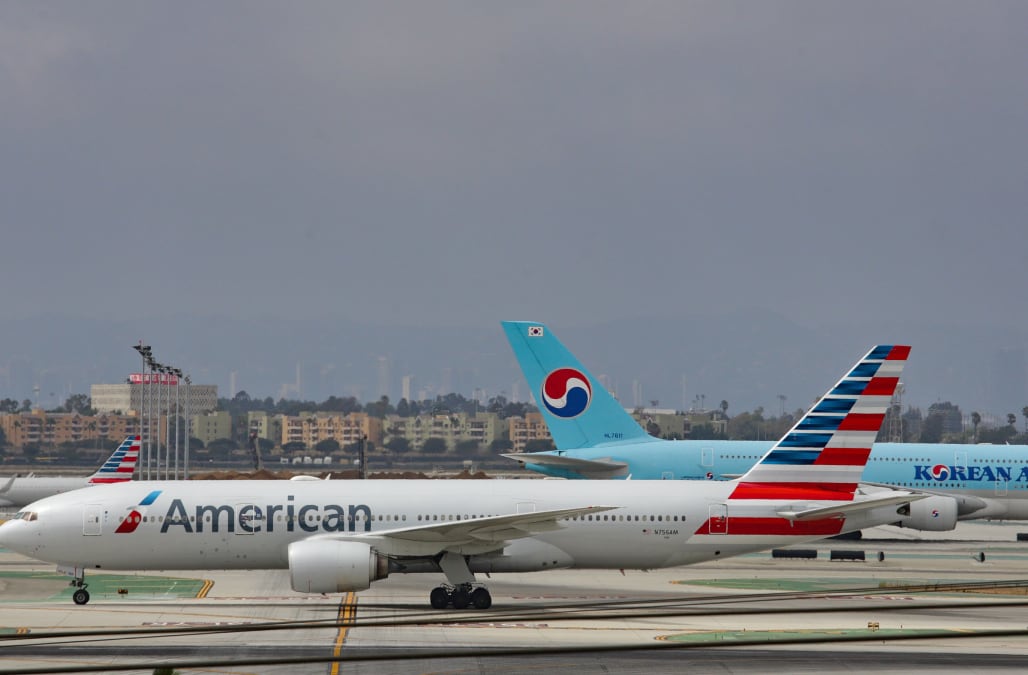 An Americans Airlines flight from Greece to Philadelphia encountered "severe turbulence" shortly before landing Saturday that was so violent 10 people were taken to a local hospital for evaluation, the airline said.

"I was looking forward and I just saw everything just move upwards about four feet," passenger Alex Ehmke said in a phone interview with NBC News. "So, I saw drinks, you know, flying up against walls and up on the ceiling."

"The gentleman directly behind us and diagonally behind us hit the ceiling himself," he said.

The airline said that three passengers and seven crew members were transported to a hospital after the Flight 759 landed at Philadelphia International Airport. The seatbelt sign was on when the aircraft hit the turbulence, it said.

Here's the ceiling of the plane pic.twitter.com/lKO75JVhF2

"We are taking care of our passengers and our crew members at this time and want to thank our team members for keeping our passengers safe," the airline said in a statement. The flight landed safely at 3:10 p.m., NBC Philadelphia reported.

Ehmke said he saw a flight attendant with what appeared to be a makeshift sling around his arm and two passengers left with what looked like ice packs on their heads. Ehmke, a 26-year-old lawyer returning from Greece after a family vacation, was not hurt.

"I was just thankful to get on the ground," he said. "When you put your feet on the gate and you get to walk away — I mean, it just, it was such a feeling of relief and so I'm just thankful that you know it wasn't worse than it was."

RELATED: Check out some of the most bizarre finds flight attendants have made:

The BBC reports that in March 2015, a British Airways flight from London to Dubai was forced to turn around because of a "smelly poo."

Abhishek Sachdev, who was on board the flight, told BBC, "The pilot made an announcement requesting senior cabin crew, and we knew something was a bit odd. About 10 minutes later he said, 'You may have noticed there's a quite pungent smell coming from one of the toilets.' He said it was liquid fecal excrement. Those are the words he used."

A BA spokesperson said the situation posed a health and safety problem because only half the air is recycled and cleaned on an airplane.

Passengers were put up in a hotel overnight since the next available flight was 15 hours later, according to the BBC.

"A passenger stood on top of the closed toilet and defecated," a flight attendant with 30 years of experience told Business Insider.

In 2014, a passenger on a China Eastern Airlines plane who said he wanted to "get off the plane quicker" deployed the emergency slide after the aircraft landed at Sanya Phoenix International Airport.

The incident caused the aircraft to be delayed for two hours and reportedly cost about $16,000 in damage.

In March, a Delta Air Lines flight was delayed at Hartsfield-Jackson Atlanta International Airport after an e-cigarette belonging to a passenger ignited on board the flight.

While battery-powered portable electronic smoking devices are permitted on planes as long as they're not checked, the lithium ion batteries in e-cigarettes have shown a propensity to ignite if they are damaged.

A flight attendant with the pen name Betty writes in her online series "Confessions of a Fed-Up Flight Attendant" that the strangest things people have asked her for on planes are actually fairly ordinary items — what's surprising is what some of these items would be used for.

Items requested include tweezers for pulling thorns out of a passenger's butt; a pen to clean ears with; a screwdriver "to take the seat apart"; and a cup, lid, straw, and knife "to make a catheter."

"One gentleman was angry, and he asked me if I could make an announcement over the PA. When I asked him what he wanted me to announce, he he said, 'somebody in this vicinity is passing gas, and I need them to stop,'" she said.

Another passenger asked her to make an announcement asking a neighboring passenger to give up the armrest.

Whatever this is
Animals left on planes

More than 700 international cabin-crew members told Skyscanner in 2013 about items they found on flights after passengers disembarked.

Animals accounted for several of the more unusual items on the list, including a falcon, dried fish, a frog, a tortoise, and a parrot.

People who make soup with the airline water

In response to the Quora question "What are the weirdest things flight attendants have seen in their line of duty?" former flight attendant Heather Wilde said she's seen her fair share of things many people would consider weird.

Among the strangest were people who made soup using the airline water. "Guys, the water lines haven't ever been cleaned — ever," she said.

"One of the weirdest things I experienced was clear-air turbulence. I was bounced between the ceiling and the floor twice and broke my foot in two places when the bar cart landed on it," a flight attendant with 27 years of experience told Business Insider.

The worst place to put a baby
Uncomfortable 'cat-cidents'

"I know more than one fellow flight attendant who has had the uncomfortable situation of having to tell a woman that she can't breastfeed her ... cat! You read that right: Breastfeeding. A. Cat. And this isn't an isolated incident," Betty wrote.

She says the cat feeders' responses are always the same: "I'm just feeding my 'baby.'"

Betty writes that passengers tend to get more inebriated on flights to Las Vegas. In his drunken state, one passenger passed out while he was in the restroom, fell backward, and ended up on the floor with his fly still down and his privates exposed.

After much debate among the attendants about what to do, "they finally decided to get the long metal tongs that we use to serve bread in first class to move the exposed body part back into his pants! He didn't feel a thing," Betty wrote.

From streaking down the aisle totally nude to falling like an axed tree, when passengers consume an unfortunate mix of Ambien — which people take to sleep on planes — and airplane cocktails, it makes even the most normal people do very bizarre things, Betty says.

Alas, this is not acceptable behavior on a long-haul international flight.

"I had a woman run to the front of the plane and throw herself in my closet. (She thought she was going to bathroom.) She then curled up in the fetal position in the closet and started sucking her thumb. She later told me that she forgot to take her anxiety medicine before flight," a flight attendant with 30 years of experience told Business Insider.

"One passenger attempted to board the plane wearing a raincoat and no pants," a flight attendant with 40 years of experience told Business Insider.

"Never say never. Weirdness will always outdo itself if you challenge it," a flight attendant with 21 years of experience told Business Insider.

"For example, a passenger stole a sandwich off the galley counter. It was a crew member's, who bought it at the airport. They'd taken a bite and left it on the counter (with a little lipstick around the bite mark) to assist someone. When the crew member came back to the galley, it was gone.

"The crew member later found the thief eating it at their seat. When asked how they could just take a used sandwich with lipstick on it, they shrugged and said, 'I was hungry.'"

So many feet!
A bloody mess

"I haven't seen this, but I did have flight attendants tell me about blood dripping from the overhead because someone was bringing in a goat's head from a Caribbean island. That was before TSA and all their security procedures were put in place, of course," Annette Long, a flight attendant with 13 years of experience, told Business Insider.