Trump administration goes on the attack against leaks 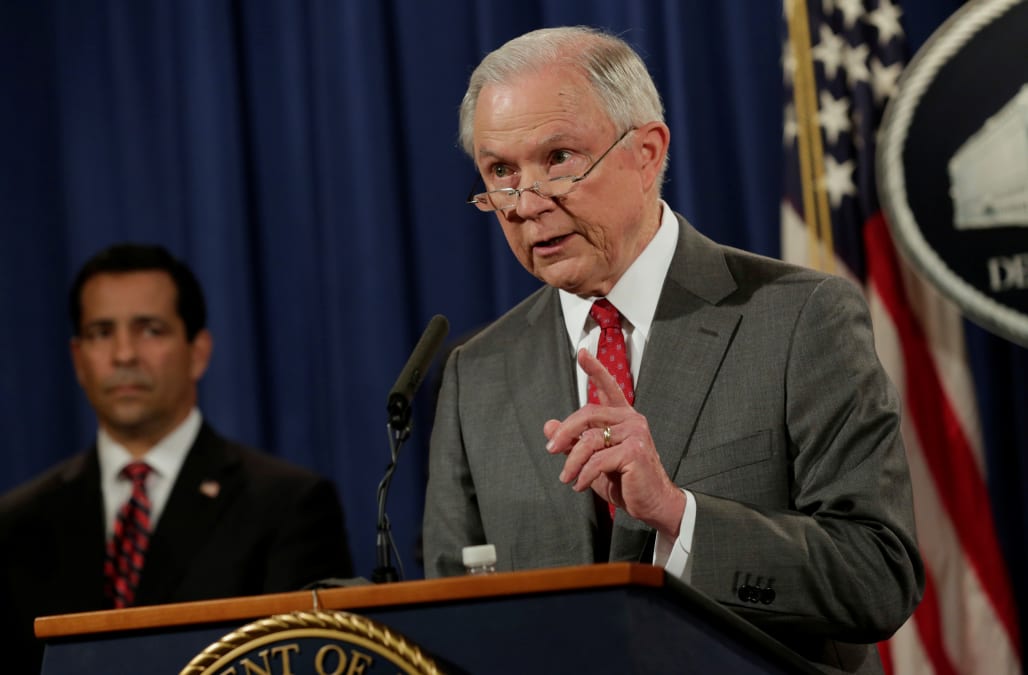 WASHINGTON, Aug 4 (Reuters) - U.S. Attorney General Jeff Sessions, taking up an issue that has infuriated President Donald Trump, went on the attack against leaks on Friday, and said that the government was reviewing policies on compelling journalists to reveal sources.

"One of the things we are doing is reviewing policies affecting media subpoenas," Sessions told reporters as he announced administration efforts to battle what he called a "staggering number of leaks undermining the ability of our government to protect this country."

"We respect the important role that the press plays and will give them respect, but it is not unlimited," he said.

A media subpoena is a writ compelling a journalist to testify or produce evidence, with a penalty for failure to do so. The fact the administration is reviewing its policy leaves open the possibility of sentencing journalists for not disclosing their sources.

Trump has repeatedly voiced anger over a steady stream of leaks to the media about him and his administration since he took office in January. Some have been related to probes into Russian meddling in the 2016 U.S. presidential election, others have concerned infighting in the White House.

Speaking to reporters after the media event with Sessions, Deputy Attorney General Rod Rosenstein said the department was just starting to review the policy on media subpoenas and could not say yet how it might be changed. But he did not rule out the possibility of threatening journalists with jail time.

Under U.S. law, a government attorney must seek the attorney general's approval before issuing a subpoena to attempt to force a member of the news media to divulge information to authorities.

In addressing the wider issue of leaks, Sessions said the Justice Department has tripled the number of investigations into unauthorized leaks of classified information and four people have already been charged.

"We are taking a stand," said Sessions, who in recent weeks has been publicly criticized by Trump for his performance in the job, including for what Trump called his weakness on the issue of going after leakers. "This culture of leaking must stop," Sessions said.

Sessions did not immediately give the identities of the four people charged, but said they had been charged with unlawfully disclosing classified information or concealing contacts with foreign intelligence officers.

Rosenstein would not say whether the crackdown on leaks came at the request of the White House. He also did not give the exact number of investigations the Justice Department is currently handling, only that this number has tripled under the Trump administration.

In the latest high-profile leak to the media, the Washington Post published transcripts on Thursday of phone calls that Trump had in the early days of his administration with Mexican President Enrique Pena Nieto and Australian Prime Minister Malcolm Turnbull.

"No government can be effective when its leaders cannot discuss sensitive matters in confidence or to talk freely in confidence with foreign leaders," Sessions said of that case.

Sessions was accompanied by Director of National Intelligence Dan Coats, who said leaks of classified information endangered national security. He said such national security breaches came from a wide range of sources, including the executive branch and Congress.

One tool Sessions has for prosecuting leakers is the Espionage Act, a World War One-era law that was designed to stop leaks to America's enemies. Federal prosecutors have used it 12 times to charge individuals for disclosing information to the media, eight of them under Democratic former President Barack Obama.

The most recent case, and the first under Trump, was the Justice Department's indictment in June of Reality Leigh Winner, a U.S. intelligence contractor accused of leaking a classified report about Russia's alleged interference in the 2016 election. (Additional reporting by Tim Ahmann; Writing by Frances Kerry; Editing by Alistair Bell)

More from AOL.com:
Ann Coulter says marijuana is making 'people retarded'
Aaron Schock’s lawyers want case tossed over 'invasive' questions about his sex life
Donald Trump and Boy Scouts have different recollections of the National Jamboree Speech and how it was received