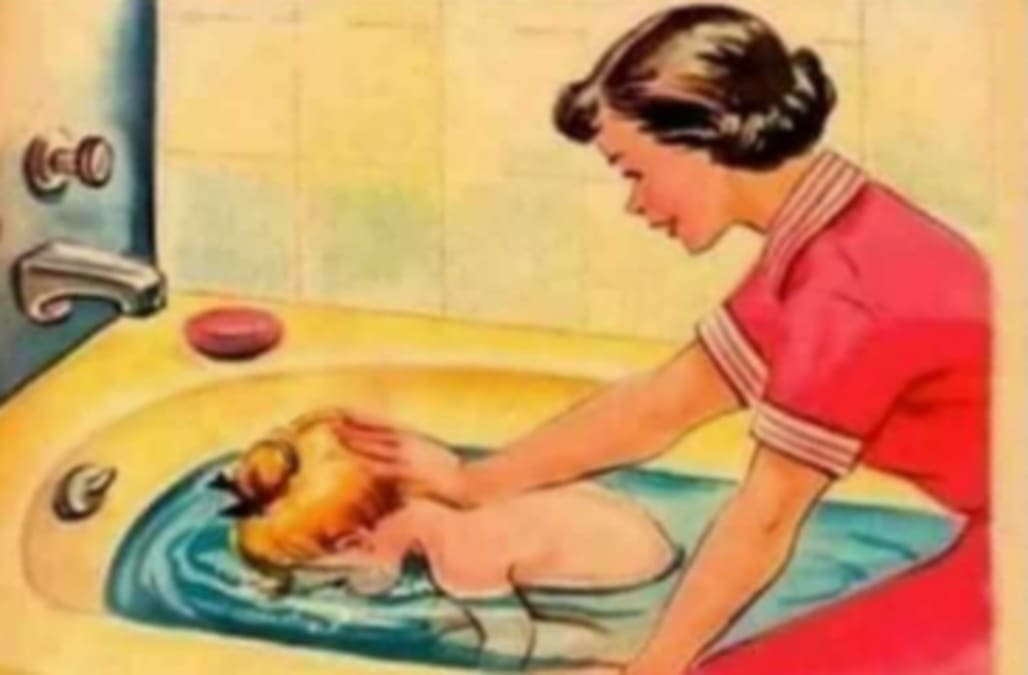 An assistant police chief for the city of Estherwood, Louisiana, has resigned after sharing a meme showing a woman forcing a child's head under water as punishment for dating a black person.

"It's not against the law to share something on Facebook. It's social media. Internet," assistant police Chief Wayne Welsh said on social media in the face of public outrage over the post he shared.

The image Welsh shared depicts a woman in pink shoving a child's head under water in the background. The visual takes on a sinister, explicitly racist meaning when one reads the accompanying text: "When your daughter's first crush is a little negro boy."

The relationship of text to image suggests that the child is being brutalized — and possibly killed — for dating someone black.

Cops: "You shouldn't fear us if you haven't done anything wrong."

Estherwood police Chief Ernest Villejoin told the media that he was shocked by Welsh's post.

"When I found out about it, I couldn't believe I had to call him. I called him at work and asked him what the hell is going on," Villejoin said to a local outlet. "He done it. He said it and he realized what he had done after he done it and he deleted it but it was too late."

Villejoin confirmed to HuffPost that Welsh has resigned over the post.

This isn't the first public figure in the last year to resign after being held accountable on social media for a racist post. In November 2016, a West Virginia mayor left her position after saying that a post calling Michelle Obama an ape in heels "made her day." In February, an Arizona teacher resigned after tweeting that immigrants should be killed.

1. Ted Cruz is the Zodiac Killer

A mock conspiracy theory that started in 2013 suggested that the former presidential candidate is actually a serial killer.

In June, the Good Morning America Twitter account butchered the name of a beloved meme. It called the "that's none of my business" Kermit the Frog photo "#tealizard," thus skyrocketing the original meme back into the public eye. The tweet has also been relentlessly mocked.

Photo of a cloaked Kermit the Frog (dressed as the Sith Lord from "Star Wars") looking at the normal version of himself has been circulating recently. Social media users tweak the dialogue to show a conversation with their conscience and "evil" inner self.

People used photos of the cartoon aardvark and titular character of the show "Arthur" to express themselves -- specifically this image of his fist, which portrays anger.

An image of basketball legend Michael Jordan crying from a video in 2009 started circulating again this year, and it's really so great you need to check it out for yourself.

American swimmer and Olympic gold medalist Michael Phelps was spotted looking particularly focused in August before a race, which quickly spiraled into a good old-fashioned meme.

2016 was a tough year for all those involved. Twitter users shared 2-4 drastically different photos with the above caption to show just how much the year affected them.

8. This is the ideal male body

Twitter took a break from body positivity (and the harassment that started the movement) to make fun of what has been hailed the "ideal male body."

Photos of the president and vice president chatting and joking around were fodder for hilarious imagined dialogue in which Biden plots silly pranks to pull on Donald Trump when he takes office.

The infamous animal was shot and killed at the Cincinnati Zoo in May when a child fell into his enclosure. Outrage ensued as many blamed the parents for the incident, but once that died down, memes began to parody the mourners by taking Harambe's death a step (or hundreds of steps) too far.

This catchphrase came from a viral montage in which one man excessively compliments his friend, Daniel, for his clothes. It's extremely upbeat and infectious.

During the second presidential debate, a hero emerged -- and it wasn't either of the candidates. Ken Bone stole the hearts of American citizens with his kind-hearted question and his iconic red sweater.

The catchphrase is used in pairing with a character and its miniature offspring, which is usually modified by Photoshop, but sometimes it happens in the wild.

Like Arthur, Mr. Krabs is just one of those expressive cartoon characters that lends himself to lots of memes. His confused look is the most viral.

The artist gained serious attention this year thanks to his hilarious Snapchat account, where he coined terms such as "major key" and "you played yourself." He notably shows off his lavish lifestyle, and once got lost on a jet ski.

This meme started with the mockery of a tweet praising the Jenner sisters, and quickly turned into satire.

This copy/paste meme pokes fun at the moments in TV shows in which you can here a vinyl record scratching before a main character explains what's going on in a situation.

A video of a 2013 rap battle between two rappers named Conceited and Jesse James did not go viral until September 2016 when someone tweeted a GIF of Conceited pursing his lips and rolling his eyes. Now it's used to show disgust or anxiety.

In February, a Twitter user shared two photos of Drake side by side -- the contradicting outfits he wore spawned a comparison meme that quickly took a turn for the weird.

20. You vs. the guy she tells you not to worry about

The artist's fourth studio album, "Views from the 6," features a tiny picture of him sitting on a ledge. He has since been Photoshopped to sit on nearly every surface imaginable.

Versions of a challenge that requires people to stand still for a prolonged period of time have existed on the internet for decades, but the masterful combination of funny posing, talented videography and the infections song "Black Beatles" by Rae Sremmurd went viral in November.

Dat boi is an instant-classic call and response meme. Whenever the photo of a frog in a unicycle is shared, whoever sees it must respond “o sh*t waddup!” That’s the whole meme.

Though Pepe has been around for a long time, it skyrocketed in popularity this year when it was commandeered by white supremacists to become a hate symbol. It became particularly well-known when Donald Trump Jr. posted a Pepe meme on his Instagram account.

Affleck's despondent reaction to a question about the lukewarm reception of "Batman vs. Superman" during an interview catapulted him into meme-dom.

The reaction image of Brazilian TV star Renata Sorrah looking confused has been circulating since 2013, but it only recently became popularly used to express confusion.