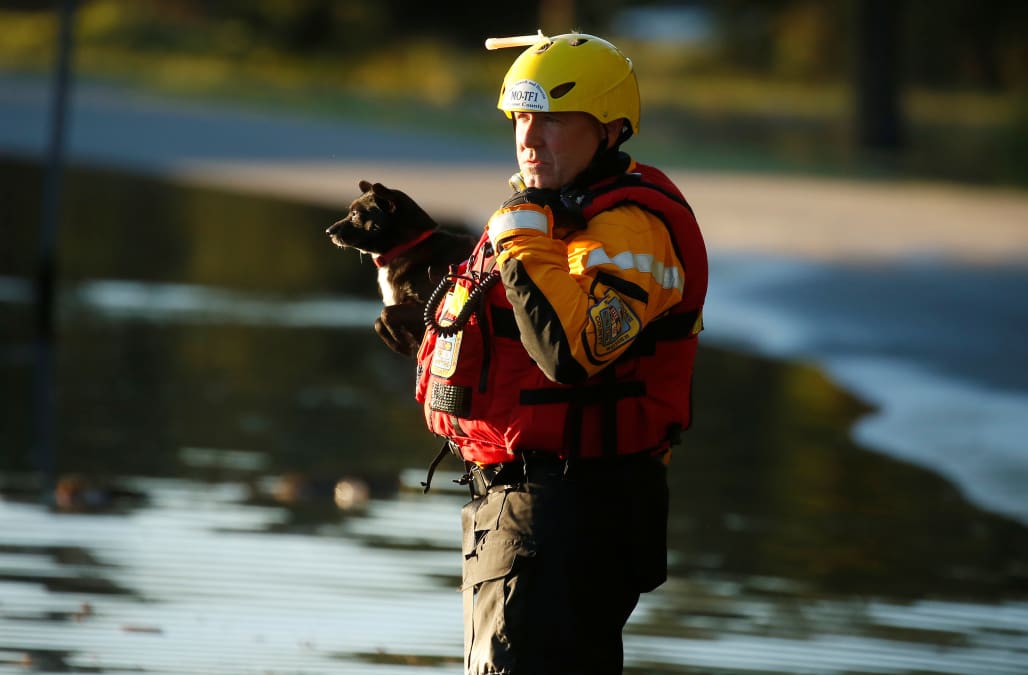 Would you be able to leave your pet behind in an emergency?

Does the thought of leaving your pet behind in an evacuation keep you up at night? If so, you're not alone. A recent paper in the American Journal of Public Health highlights how neglecting steps for evacuating animals, thereby forcing people to leave their pets behind, can have serious public health consequences for the pet owners—and for everybody else.

If you're thinking of sticking it out with your pets instead of evacuating, you aren't the only one. Study author Robin Chadwin, a veterinarian at San Diego Humane Society and SPCA and associate at the UC Davis International Animal Welfare Training Institute, cites a 2007 paper where 16.2 percent of participants (largely lower class and elderly) said that they would not evacuate without their pets. And 8.1 percent said they would stay at home with their pets during an evacuation. Another study found that 44 percent of people who refused to evacuate during Hurricane Katrina did so in part because they refused to leave their pets behind.

"Hurricane Katrina left a huge impression on me," says Chadwin. "I was only in college at the time, but I still remember the hundreds of homeless animals that came to California animal shelters because they had no other place to go. The images of owners carrying animals on their backs as they tried to escape the flooded streets are not easy to forget."

And even if they're willing to evacuate, Chadwin says, people often return before it's safe to do so in order to rescue their pets. An extreme example Chadwin cites is when a dog owner jumped out of a police rescue helicopter to return to her pet during the 2009 Victoria, Australia bush fires.

"What happens in these situations is you have people coming in who are not part of the Incident Command System, who are not part of the official response, and they'll just take it upon themselves to go into this potentially dangerous situation and try to rescue animals," she says. "Then they might try to rescue animals and then take them to a shelter somewhere, again since they are not really affiliated with the official response, you have no idea what shelter they are taking them to or how they are identifying these animals."

Chadwin's paper discusses the need for a organized plan for significant pet populations in case of emergencies, based on the risks that people take for their pets, the psychological impacts of losing an animal in a traumatic situation and the risks of terrified abandoned pets being left to fend for themselves in the event of being left. In her paper, she describes that even ten years after an event as terrible as Katrina, development of animal evacuation and sheltering plans during disasters is widely overlooked both in the US and abroad.

Leaving behind a pet causes distress to both the owner and the animal, and could lead to risky public health situations.

This isn't just tragic for animal lovers: the risk of zoonotic diseases and animal bites increases when pets roam free after a disaster. Leptospirosis and Giardia are two examples of diseases that may come from leaving pets in dire situations that can later be passed on to humans. After the nuclear accident at Fukushima, there was a 30-fold increase in dog bite wounds, 40 percent of which were from neglected dogs after the evacuation, Chadwin reports using this study.

So why aren't we already rescuing pets in a crisis?

Places like the Red Cross state that they cannot take pets into their shelter because animals can be loud and put phobic or allergic people at risk, says Chadwin.

"There are also a lot of people who just don't think we should be wasting money, time or resources on rescuing animals—we should be rescuing people," she says. "That is a valid argument, but the research has shown that by rescuing animals you are making your overall rescue response more efficient, because you're going to have more people evacuating if they know they can take their animals somewhere."

Some ways they recommend preparing in case of a disaster would be identifying a "safe haven," like an emergency animal shelter, pet-friendly hotel, or out-of-area relative's home. That way if an evacuation shelter doesn't accept animals, your fur babies will be safe and locatable. In the case of an emergency caregiver, they should be fully aware of the responsibilities of pet ownership in case something happens to you in the event of a natural disaster or accident.

An emergency kit should include the basics like food and water, as well as things like copies of medical records, cleaning supplies, a crate or carrying mechanism, as well as photos of your pet in case you get separated. This is also why it's so important to have your pets microchipped and keep a collar with ID tags on them.

Special items are important for special pets like horses, birds, reptiles and small mammals. If you have a large animal like a horse, the ASPCA suggests socializing them from an early age so in case of an emergency, they won't freak out if handled by strangers. For your smaller pets like birds, reptiles and rodents, secure carriers as well as special items (a spray bottle to periodically moisten your bird's feathers in warm weather or a bowl that is large for your scaly friend to soak in) are necessary.

Chadwin says having a plan in place is something that pet owners need to take charge of, but can ultimately be beneficial to the community as a whole.

"First responders could spend their time looking for people trapped in evacuation areas, not rescuing pet owners who have sneaked back in to try to rescue their pets, or pet owners who have refused to evacuate without their pets," she says. "There would be less of a need for animal rescue groups to go into dangerous areas to try to rescue trapped animals. Resilience is improved when people know their pets are safe, and psychological conditions such as depression, anxiety, and PTSD, which have been strongly linked with losing a pet during a disaster, would be decreased."

More from Popular Science:
The world's water quality might be in trouble
Buy the last umbrella you'll ever need
It looks like we’re one step closer to creating genetically modified humans in a lab