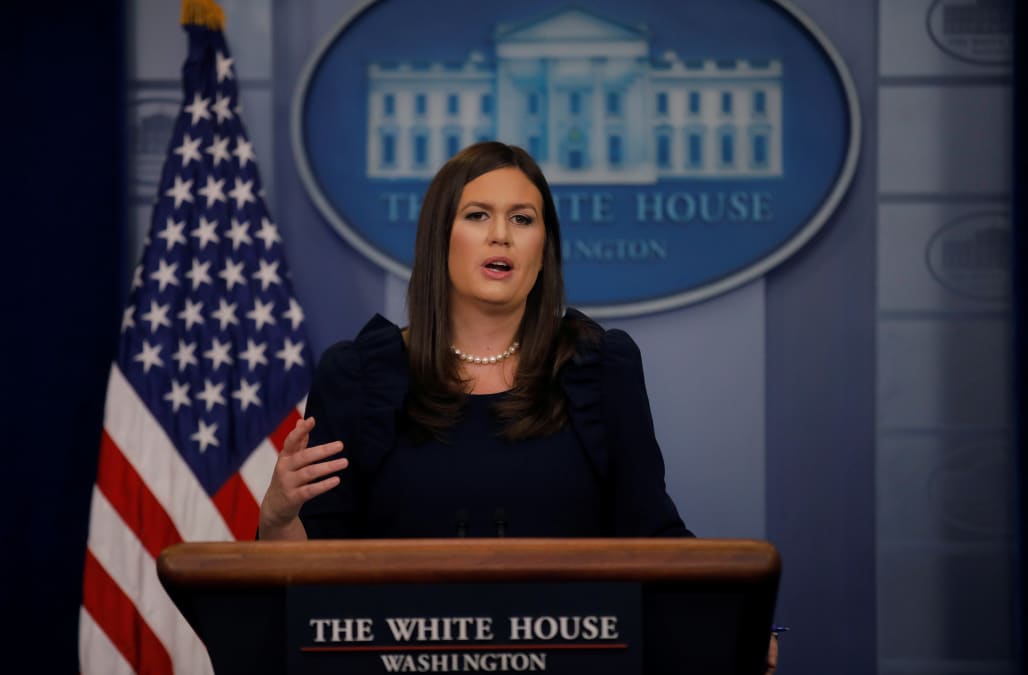 President Donald Trump acted "as any father would" in dictating the initial misleading statement that Donald Trump Jr. used when confronted by The New York Times earlier this month about his June 2016 meeting with a Russian lawyer, White House press secretary Sarah Huckabee Sanders said Tuesday.

Sanders' statement followed a bombshell Washington Post report on Monday that outlined how Trump "personally dictated" the initial misleading statement to the Times, which noted that those in the meeting "primarily discussed a program about the adoption of Russian children" and that the subject of conversation was "not a campaign issue at the time."

The Trump Jr. statement made no mention of what would eventually be revealed days later with the publication of Trump Jr.'s emails with a music publicist who helped arrange the meeting. In those emails, it became clear that Trump Jr. was fully expecting to be presented with damaging information related to soon-to-be Democratic presidential nominee Hillary Clinton that originated from the Russian government.

"The statement that Don Jr. issued is true," Sanders said during Tuesday's press briefing. "There's no inaccuracy in the statement. The president weighed in as any father would, based on the limited information he had, this is all discussion of frankly no consequence. There was no follow up. It was disclosed to the proper parties, which is how the New York Times found out about it to begin with."

Trump said he learned of the meeting in the immediate days before the Times' report in early July, with previous reporting suggesting that Trump signed off on the statement. But Trump's direct involvement in the statement's crafting was described to the Post by one Trump adviser as "unnecessary."

"Now someone can claim he's the one who attempted to mislead," the adviser said. "Somebody can argue the president is saying he doesn't want you to say the whole truth."

At the time, one of Trump's top lawyers in the Russia investigation, Jay Sekulow, told media outlets that the president "didn't sign off on anything" and "wasn't involved" in drafting the first Trump Jr. statement.

That meeting, which was also attended by then-campaign chairman Paul Manafort and Jared Kushner, Trump's son-in-law and a White House senior adviser, has caught the attention of special counsel Robert Mueller.

Mueller, who is investigating whether members of the Trump team colluded with Russia during the course of the 2016 presidential election, sent the White House a request asking officials to preserve any documents related to that June 2016 Trump Tower meeting.

Press Sec. Sanders on Trump Jr. statement: "The president weighed in as any father would, based on the limited information that he had." pic.twitter.com/3cTvNq9Gtj