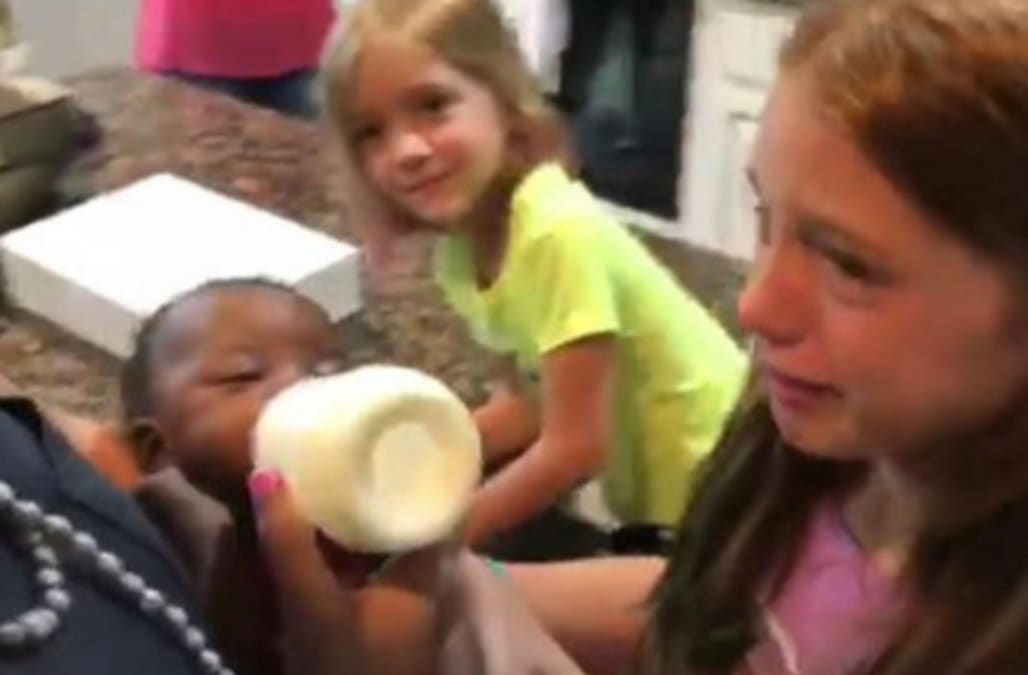 A Texas mom and dad surprised their two daughters with their newborn adopted sister in a touching moment caught on camera.

Kasi and Shane Pruitt said they had been waiting to adopt their fifth child, but didn't think the moment would come as rapidly as it did.

Read: 18-Year-Old Adopted After Spending More Than a Decade in Foster Care

The couple received word about a baby girl who was just weeks old who needed to be adopted. The next day, they brought baby Celsey home.

"We got a call on Tuesday night about this possibility," Shane Pruitt said. "We met with our lawyer and the birth mom at 8 a.m. [the next day] It was very fast and we didn't have a chance to talk to our kids about it."

The parents, who already had two biological daughters and two adopted sons, said their kids were excited about the idea of having another sibling, so surprising the girls, ages 11 and 6, would be a special moment.

In the emotional moment, the couple's 11-year-old daughter, Raygen, breaks down in tears as she first lays eyes on her new baby sister while 6-year-old Harper can't believe it.

Their dad said the girls' reactions were "very fitting of their personalities," but what the parents weren't expecting were the emotions they felt while watching the video later on.

"It just blessed our heart and made us feel blessed as parents, to not only see our family grow but it also blessed us to see our older children respond in that way," Pruitt said. "To see their love, you know we are not perfect as parents, but in that moment it felt like we were doing something right."

The video has since gone viral and has been liked more than 17,000 times on Facebook.

"We posted the video to Facebook and Twitter and it was basically a birth announcement to our family and friends on social media. It just took off from there."

Read: Boy With Cerebral Palsy Adopted After His Brother Insisted They Stay Together

The family said they are delighted about their 3-week-old new addition.

"She is beautiful," Pruitt said. "She's a gift from our great God. She is loved deeply."

Watch: Dying Dog Gets to Live Out Final Days in New Home After Being Adopted