Top Republican senator says his party is in 'denial' about Trump 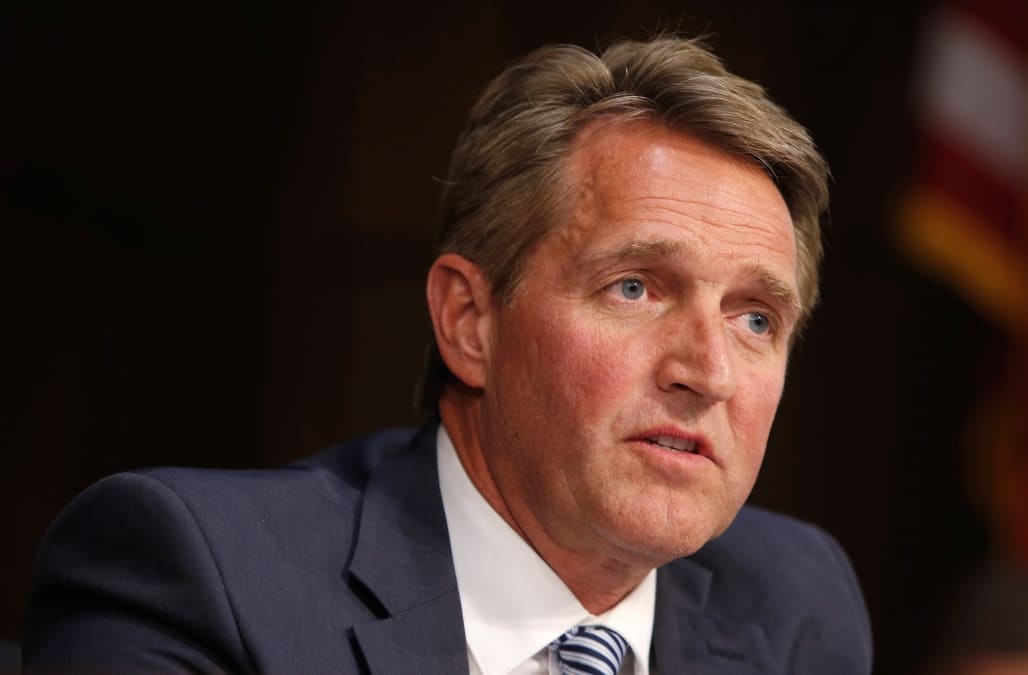 Republican Sen. Jeff Flake of Arizona wrote that his party is in "denial" about President Donald Trump in a column in Politico on Monday.

Flake, who is up for reelection in 2018 and is one of the more vulnerable GOP senators in the upcoming election, held little back in the Politico op-ed, describing an executive branch "in chaos" and a president who has "seeming affection for strongmen and authoritarians."

The Arizona Republican also took issue with his party's mission while President Barack Obama was in office.

"Who could blame the people who felt abandoned and ignored by the major parties for reaching in despair for a candidate who offered oversimplified answers to infinitely complex questions and managed to entertain them in the process," he wrote. "With hindsight, it is clear that we all but ensured the rise of Donald Trump."

"I will let the liberals answer for their own sins in this regard. (There are many.) But we conservatives mocked Barack Obama's failure to deliver on his pledge to change the tone in Washington even as we worked to assist with that failure," he continued. "It was we conservatives who, upon Obama's election, stated that our number-one priority was not advancing a conservative policy agenda but making Obama a one-term president — the corollary to this binary thinking being that his failure would be our success and the fortunes of the citizenry would presumably be sorted out in the meantime."

He said conservatives were "largely silent when the most egregious and sustained attacks on Obama's legitimacy were leveled by marginal figures who would later be embraced and legitimized by far too many of us."

"It was we conservatives who rightly and robustly asserted our constitutional prerogatives as a coequal branch of government when a Democrat was in the White House but who, despite solemn vows to do the same in the event of a Trump presidency, have maintained an unnerving silence as instability has ensued," he continued. "To carry on in the spring of 2017 as if what was happening was anything approaching normalcy required a determined suspension of critical faculties. And tremendous powers of denial."

Dating back to the presidential campaign, Flake has been one of Trump's most vocal critics among Republican senators. He wrote that he's been "sympathetic to this impulse to denial" that he earlier mentioned. But he added that the Constitution does not provide much of an ability for others in government to "do something about an executive branch in chaos."

"There was a time when the leadership of the Congress from both parties felt an institutional loyalty that would frequently create bonds across party lines in defense of congressional prerogatives in a unified front against the White House, regardless of the president's party," he wrote. "We do not have to go very far back to identify these exemplars — the Bob Doles and Howard Bakers and Richard Lugars of the Senate. Vigorous partisans, yes, but even more importantly, principled constitutional conservatives whose primary interest was in governing and making America truly great."

Flake ended his piece by providing three suggestions for his party.

"First, we shouldn't hesitate to speak out if the president 'plays to the base' in ways that damage the Republican Party's ability to grow and speak to a larger audience," he wrote. "Second, Republicans need to take the long view when it comes to issues like free trade: Populist and protectionist policies might play well in the short term, put they handicap the country in the long term. Third, Republicans need to stand up for institutions and prerogatives, like the Senate filibuster, that have served us well for more than two centuries."

SEE ALSO: Trump is quietly moving at a furious pace to secure 'the single most important legacy' of his administration