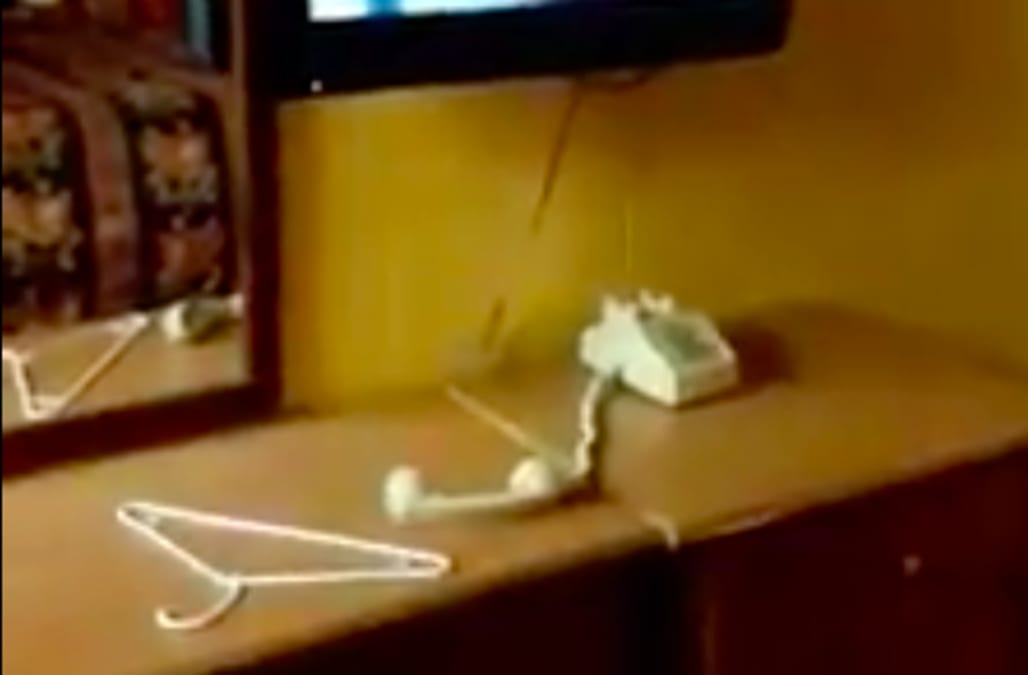 Do you believe in ghosts? If not, watch this footage and then maybe you'll re-evaluate your stance.

Frank Ramirez of Corpus Christi, Texas, posted a video on Facebook he recorded at a motel in Harlingen, Texas, on Friday that seemingly depicts a slew of paranormal events.

In the video, Ramirez can be heard describing how he observed towels and cups being knocked over without explanation earlier that night.

At one point, an unplugged telephone on a large dresser can be seen suddenly flying off its hook.

The creepy footage has amassed over 6 million views since it was first uploaded on July 29 -- but not everyone is so convinced that the video is legitimate.

Some Facebook commenters have accused Ramirez of faking the paranormal experience by using fishing wire or strings to make the objects move.

"Starting around 2:15 to 2:30 he moved the camera around to the other side of the room to grab a string attached to the towel and then faced the mirror/towel to pull the string," one commenter wrote. "After that, he then laughed."

"People do anything for likes and attention because its clearly fake.." another snapped. "Does not take a genious to figure out wat he is doing (sic)."

Others, however, seem to buy Ramirez's claims.

"or all the skeptics this proves HOW THE VIDEO IS REAL.." one woman wrote. "When he went the first time to put a close up on the phone when it came off the Ringer THERE WAS NO STRING and when the phone fell on the floor THAT EXPLAINS HOW IT'S REAL!!!!"

One ghost truther even went as far as to share a negative version of the photo to prove there were no strings attached to the flying phone.

Ramirez told KSAT that he requested a new room after telling hotel staff that his room was ... already occupied.

Motel staff members allegedly told him they won't be renting out the room until they got it blessed.

More from AOL.com:
Woman calls 911 after boa constrictor wraps around her head, bites her nose: 'There's blood everywhere'
Live TV reporter acts perfectly calm as spider casually crawls all over her
Conspiracy theory jokes that Outback Steakhouse is the center of a satanic cult