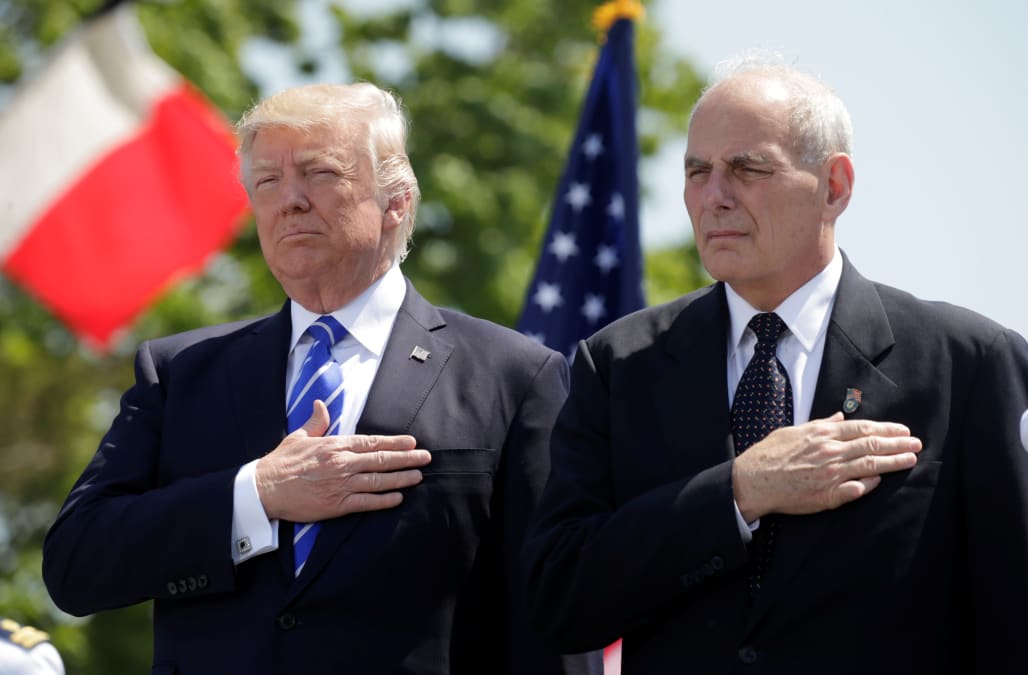 A Democratic Congresswoman has blasted General John Kelly's appointment as the new White House chief of staff by describing him as "an extremist."

Representative Barbara Lee of California tweeted on Friday, "By putting Gen John Kelly in charge, Pres Trump is militarizing the White House & putting our executive branch in the hands of an extremist."

"Despite the constant negative press covfefe."

"Covfefe" appears to be a mangled attempt at typing "coverage," and most users who saw the tweet assumed Trump would delete it and try again.

However, astonishingly, the tweet stayed up for a full six hours before it was taken down. In the meantime, online jokesters went wild.

Finally, at 5:48 a.m., the tweet was removed, and 20 minutes later the president replaced it with one acknowledging the chaos he unleashed.

"Who can figure out the true meaning of 'covfefe' ??? Enjoy!" Trump tweeted.

"The possibility of lasting peach"

In late May, the White House released a statement saying one of Trump's goals during his trip to Israel was to "promote the possibility of lasting peach" in the region.

The slip of the fingers was one of several bizarre mistakes in the press release. A few lines above, the White House misspelled the "Sepulchre" in Church of the Holy Sepulchre, inserted a superfluous apostrophe in the word "Israelis," and left a "d" off "coupled."

The only problem was the White House's statement revealing the pick spelled his name "John."

Trump added to his lexicographical lowlight reel in May when he tweeted about Sally Yates, the former acting attorney general he fired in January.

Yates was gearing up to testify before a Senate subcommittee about her role in the dismissal of former national security adviser Michael Flynn when Trump chimed in.

"Ask Sally Yates, under oath, if she knows how classified information got into the newspapers soon after she explained it to W.H. Council," Trump said on Twitter.

The offense here is "council" — a perfectly valid word, but not in this context. Two hours later, Trump deleted the tweet and replaced it with one containing the correct word, "counsel."

Merriam-Webster did not spare him an English lesson, to the delight of spelling aficionados everywhere.

About a week later, Trump stumbled over the same word, this time adding a unique twist — he spelled it "councel," which is wrong in any context. Merriam-Webster corrected the record once more.

President Trump's most infamous typo occurred in December, when he described the Chinese seizure of a US Navy drone as an "unpresidented act."

After the spelling miscue was widely mocked online, Trump deleted the tweet and replaced it with a correctly spelled version four hours later.

In March, Trump brought political discourse to a halt with a stunning claim — that President Barack Obama had wiretapped his office in 2016.

"How low has President Obama gone to tapp my phones during the very sacred election process. This is Nixon/Watergate. Bad (or sick) guy!" the president tweeted.

The unsubstantiated claim was widely criticized, and FBI Director James Comey later testifiedthat "the department has no information that supports those tweets."

But if baselessly accusing his predecessor of a felony wasn't enough, Trump's original tweet also contained an egregious spelling error — it's "tap," not "tapp."

"No challenge is to great"

"No dream is too big, no challenge is to great," the text on the poster read, superimposed over a picture of a beaming Trump.

It should have said "no challenge is too great." The fact that the first part of the sentence contains the correct too suggests this mistake may have been a simple typo. Nevertheless, the blunder was roundly criticized, and reflected poorly on Trump's inexperienced team.

The list was problematic for several reasons — one of them being that many of the incidents on the list had been extensively covered by the media.

But the presentation of the list earned some disapproval as well.

About halfway down the list, the word "attacker" suddenly morphed into "attaker," which appeared more than 20 times. The list included the terrorist attack in "San Bernadino, CA," a misspelling of San Bernardino. And at one point Denmark is spelled "Denmakr."

Critics blasted the White House for publishing the hastily prepared list — and for not using a spell-checker.

Back in January, the White House misspelled the name of British Prime Minister Theresa May three times in the official schedule of May's visit to the US.

Trump struggled not once but twice to spell "hereby" correctly in March, spelling the word "hear by" in one tweet, and in an attempt to self-correct, "hearby" in another.

Sandwiching the two tweets was a call for education reform — more unfortunate optics for the president.

The Department of Education got in on the action when it published a tweet honoring W.E.B. DuBois, the civil-rights activist and historian who founded the NAACP.

The only problem was it spelled his name "DeBois."

In a follow-up tweet, the department apologized for the mistake, which paved the way for another embarrassing typo …

Twenty-nine minutes after misspelling W.E.B. DuBois's name, the Education Department attempted to atone for its orthographic blunder, but ended up making things worse.

Suffice to say, the goof didn't reflect well on the department. Critics aimed their ridicule at Education Secretary Betsy DeVos, who was narrowly confirmed a week earlier after a contentious debate in the Senate.

The White House had another ironic spelling lapse on April 15 when a post from its Snapchat account pointed out Secretary of "Educatuon" Betsy DeVos.

"Thr coverage about me … gas been so false and angry"

This head-scratcher from January had critics wondering whether Trump proofread his tweets at all before launching them into the Twittersphere.

Denmark wasn't the only country whose name the White House would bungle in February.

The readout of Trump's call with Colombian President Juan Manuel Santos contained an unfortunate spelling gaffe — it said "Columbia" instead of "Colombia."

The Columbia/Colombia mix-up is well documented among English speakers, so the White House isn't alone in making this error. What's confusing is that the White House managed to spell the country's name correctly at least two other times in the same readout.

Trump's presidency got off to a rocky start, orthographically speaking. Just a day after assuming the office, the president tweeted that he was "honered to serve you, the great American People, as your 45th President of the United States!"

After Twitter users not-so-kindly pointed out the botched spelling of "honored," Trump deleted the message and reposted it with the correct spelling.

Lee did not specify the reason behind her post.

A New York Times report indicates that Trump likely chose Kelly due, in part, to his backing of the president's immigration policies and his tough talk against critics.

The Times also points out, "The selection of Mr. Kelly was quickly praised by both Republicans and Democrats, who expressed hope that he would bring a swift end to the distracting feuds among the president's staff."

The desired goal is for him to apply his decades of military experience towards bringing stability and discipline to the White House.

Trump announced his decision to put Kelly into the high-profile role on Friday, tweeting, "I am pleased to inform you that I have just named General/Secretary John F Kelly as White House Chief of Staff. He is a Great American and a Great Leader. John has also done a spectacular job at Homeland Security. He has been a true star of my Administration."

The president added about his outgoing chief of staff, "I would like to thank Reince Priebus for his service and dedication to his country. We accomplished a lot together and I am proud of him!"

Kelly is expected to start his new position on Monday.