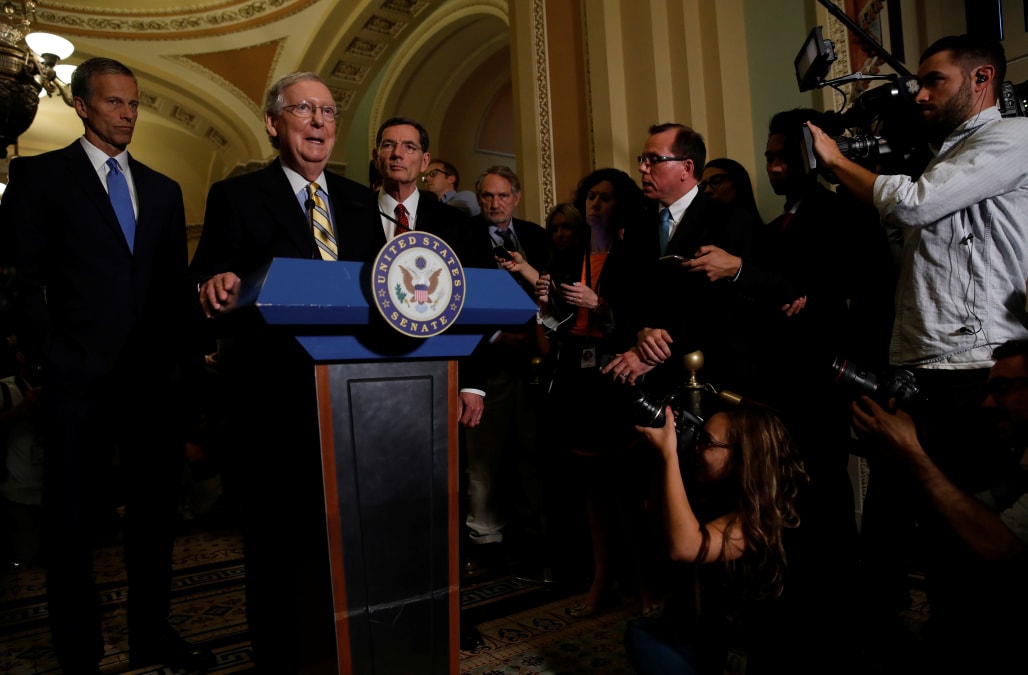 WASHINGTON — Senate Republicans failed to pass a pared-down Obamacare repeal bill early Friday on a vote of 49-51 that saw three of their own dramatically break ranks.

Three Republican senators — John McCain, Susan Collins and Lisa Murkowski — and all Democrats voted against the bill, dealing a stinging defeat to President Donald Trump who made repeal of Obamacare a cornerstone of his presidential campaign.

The late-night debate capped the GOP's months-long effort to fulfill a seven-year promise to repeal the Affordable Care Act.

3 Republicans and 48 Democrats let the American people down. As I said from the beginning, let ObamaCare implode, then deal. Watch!

The Senate has tried to pass multiple versions of repeal: repeal and replace, a straight repeal and Friday's bare-bones repeal, but none garnered the support of 50 Republicans.

"This is clearly a disappointment," he added. "It's time to move on."

The return of Sen. McCain to Washington on Tuesday after a brain cancer diagnosis added drama to the already tense proceedings. It was his vote — the 50th — that allowed Republicans begin debating the measure.

McCain gave a heartfelt speech upon his return to the Senate, decrying the rise of partisanship. And it was McCain who put an end to the partisan repeal effort.

Vice President Mike Pence, who arrived in the chamber in a bid to rescue the bill and in preparation to cast the deciding vote, stood alongside McCain's desk and then joined the senator in the cloakroom in a failed effort to convince him to vote for the bill.

By the time they re-emerged, the vote had begun.

McCain walked over to the Democratic side of the chamber after casting his "no" vote where he was greeted with hugs and cheers.

Several Republicans said they did not know where McCain would, and there were audible gasps in the chamber when he turned down his thumb to indicate his decision.

The renowned maverick had committed perhaps his most rebellious move ever, defying his party and president on the one issue that had united the Republicans for nearly a decade.

He walked off the Senate floor saying little. "I thought it was the right vote," he said a short time later while getting into his car.

Soon after his office put out a more thorough statement:

"I've stated time and time again that one of the major failures of Obamacare was that it was rammed through Congress by Democrats on a strict-party line basis without a single Republican vote. We should not make the mistakes of the past that has led to Obamacare's collapse, including in my home state of Arizona where premiums are skyrocketing and health care providers are fleeing the marketplace."

It isn't clear what comes next, but the collapse of some insurance markets around the country serve as an incentive for Republicans and Democrats to hold hearings and fix the problems with health care.

Most Republicans never embraced the different iterations of legislation they crafted, nor the process by which it was constructed. Even on the last-ditch effort at a bare-bones bill, Republicans couldn't reach agreement. Over the past two days, many rejected a plan that would have partially repealed and replaced Obamacare and a measure that would have just repealed it. The repeal vote was the same bill that passed the Senate and the House in 2015 when former President Barack Obama vetoed it.

"I sat there with Senator McCain. I think both of us recognize that it's very hard to disappoint your colleagues," said Sen. Murkowski who voted "no" throughout the process. "And I know that there is disappointment because it was the three votes that Senator McCain, Senator Collins, and I cast that did not allow this bill to move forward. And that is difficult."

"But I believe each of us stood up for the reasons that we felt were right," she added.

The failed vote happened just three hours after the text of the latest version was released, but it wasn't enough to gather the support necessary.

Democrats sustained their pressure against Republicans by slowing down not only the health care debate on the floor but all Senate activity. Activists, meanwhile, held daily protests on Capitol Hill, targeting skittish senators' offices. Those protests continued until the vote occurred Friday morning with health care activists gathered outside the Capitol.

We are not celebrating; we are relieved--for the Americans who can now keep their #healthcare. We must work together to improve the law.

Senate Minority Leader Chuck Schumer, D-N.Y., told reporters that he knew McCain was going to vote against his own party's bill by around 10 p.m., three hours before the vote. He said he had talked to his colleague four or five times per day over the last three days.

"John McCain is a hero and has courage and does the right thing," Schumer said.

Until the end, passage on the Health Care Freedom Act, also dubbed the "skinny" repeal, was never certain.

Many Republicans who did vote for it said they were holding their nose to vote for it just to advance the process into negotiations with the House of Representatives.

In the hurried process of trying to come up with legislation, the non-partisan Congressional Budget Office released an analysis lat on Thursday night that found that 16 million people would lose their health insurance in 2018 under the latest plan. Premiums would have risen 20 percent each year over the next decade, the analysis found.