John McCain: Here's why I voted no and killed the 'skinny repeal' 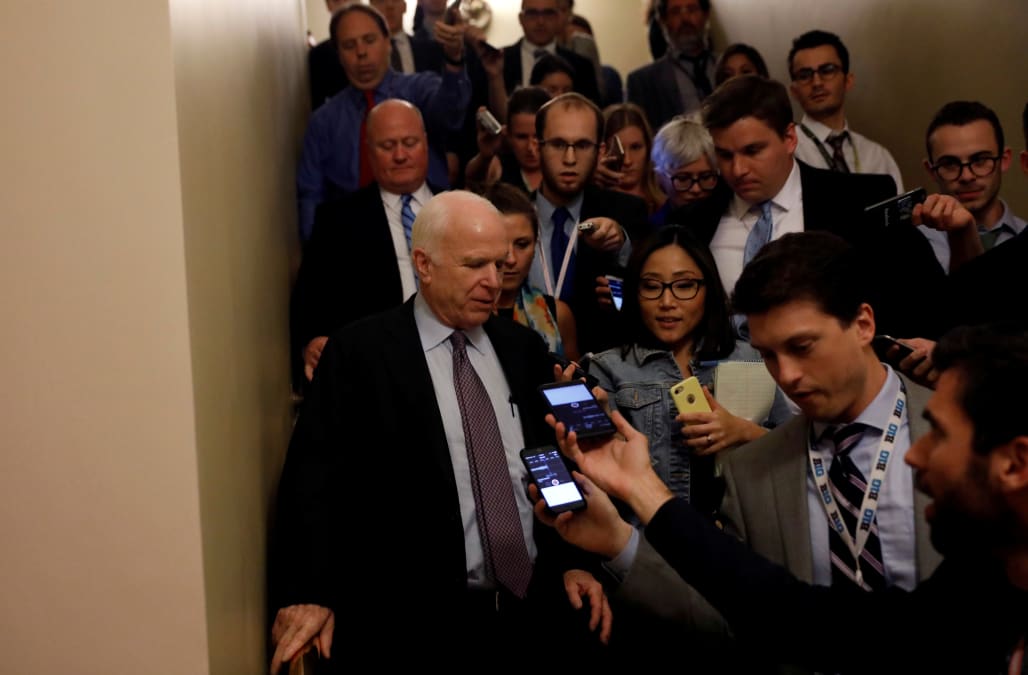 Senator John McCain was one of three Republican "no" votes against the GOP health care plan early Friday morning, and is being hailed as the man who killed the so-called Obamacare "skinny repeal."

"We should not make the mistakes of the past that has led to Obamacare's collapse, including in my home state of Arizona where premiums are skyrocketing and health care providers are fleeing the marketplace," McCain said in a statement.

All 48 Democrats voted no, along with three Republican senators — McCain, as well as Sens. Lisa Murkowski of Alaska and Susan Collins of Maine.

McCain had returned to Washington for the health care vote on Tuesday, nearly a week after his office announced he had been diagnosed with brain cancer. The Arizona senator delivered a powerful speech from the Senate floor Tuesday, focusing on a need to return to a more bipartisan approach.

It appeared Republican leaders attempted to convince McCain to change his vote before the "skinny repeal." Senate Majority Leader Mitch McConnell and Vice President Mike Pence were seen before the vote speaking with McCain, but the senator stuck with his "no," effectively ending the bill.

"From the beginning, I have believed that Obamacare should be repealed and replaced with a solution that increases competition, lowers costs, and improves care for the American people. The so-called "skinny repeal" amendment the Senate voted on today would not accomplish those goals. While the amendment would have repealed some of Obamacare's most burdensome regulations, it offered no replacement to actually reform our health care system and deliver affordable, quality health care to our citizens. The Speaker's statement that the House would be "willing" to go to conference does not ease my concern that this shell of a bill could be taken up and passed at any time.

I've stated time and time again that one of the major failures of Obamacare was that it was rammed through Congress by Democrats on a strict-party line basis without a single Republican vote. We should not make the mistakes of the past that has led to Obamacare's collapse, including in my home state of Arizona where premiums are skyrocketing and health care providers are fleeing the marketplace. We must now return to the correct way of legislating and send the bill back to committee, hold hearings, receive input from both sides of aisle, heed the recommendations of nation's governors, and produce a bill that finally delivers affordable health care for the American people. We must do the hard work our citizens expect of us and deserve."

SEE ALSO: John McCain delivers powerful speech from the Senate floor as he returns while dealing with brain cancer