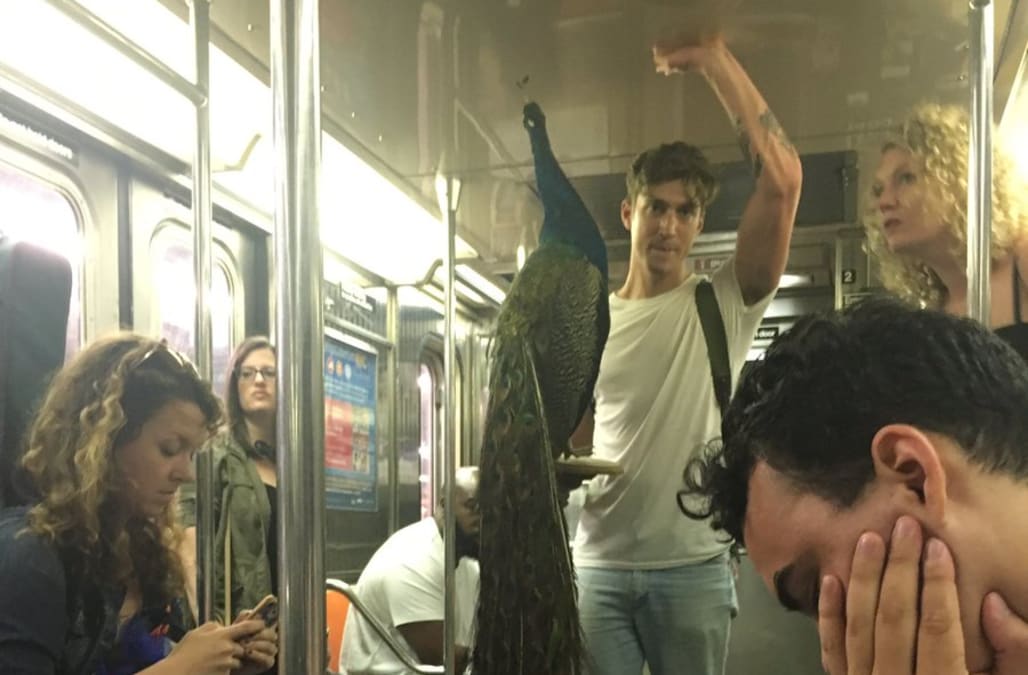 New York City residents are used to seeing strange things on the subway — dogs in suitcases, impromptu graduation ceremonies, people vacuuming and eating off of subway platforms, you name it.

So, honestly, a guy carrying a full-grown peacock onto the train doesn't really shock anyone, but it's still pretty cool.

Midday on the @NYCTSubway. Guy walks onto a train with this. pic.twitter.com/Ca67la8Dvv

The people around this peacock chillin' in the train absolutely couldn't care less about the giant bird hovering above them. This is what NYC is all about.

The MTA Peacock Guy, as he calls himself, is Reddit user BarFreddys, did a bit of a victory lap when the picture caught steam around the internet. He explained a little behind the bird in a comment, and sadly revealed that the peakcock is stuffed.

"Haha, no it's the mascot of a bar I run in Tribeca called Weather Up," he wrote. "The owner Kathryn is the blonde woman to right of me, she's the owner of the peacock. It's also stuffed, come to the bar for a beer."

To prove his identity and to give us another shot of the dead, commuting bird, BarFreddys also posted a photo of him and his pal cracking open a cold one after their big NYC adventure. 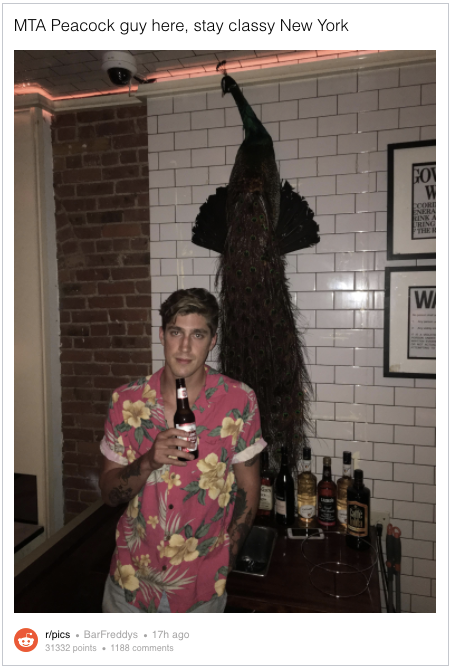 That is one giant peacock.

New York City Transit's Twitter account tried to put an end to this fun by contacting the original uploader for information regarding MTA Peacock Guy, but his fellow New Yorkers didn't stand for it. Let the peacock guy live!

if possible, can you please provide more details about this incident?^TCB

This is likely the only positive thing that has happened on the subway this week.

And it's true — between the scorching heat and the MTA's "Summer of Hell," public transportation in NYC hasn't exactly been pleasant. So let everyone have a little fun!

After all, like we said, this isn't the strangest thing that's happened in the subway, and everyone knows it.

This guy needs to meet the goth girl with the raven. pic.twitter.com/sBHSm5kxpk

This guy needs to meet the goth girl with the raven. pic.twitter.com/sBHSm5kxpk

Another day, another bird on the subway.

WATCH: This team is helping to save the rainforest with audio technology

More from AOL.com:
Live TV reporter acts perfectly calm as spider casually crawls all over her
Authorities use selfies to track down mom accused of shoplifting with child
Family’s dream home turns into termite-infested nightmare